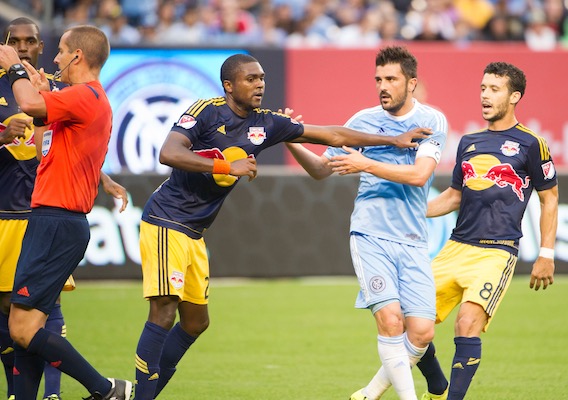 New York vs. "New York" is always fun (until a mini-riot breaks out). Portland and Seattle go way back. And Houston vs. Dallas is particularly interesting this year. All three are worth watching this weekend.
BY Franco Panizo Posted
June 23, 2017
7:00 AM

RIVALRY WEEK has arrived, and for the third year running most if not all eyes will be fixed on the Big Apple for a derby that initially seemed manufactured by the marketing department but now appears to be genuinely intense.

The New York Red Bulls will open the doors of Red Bull Arena to take on cross-river nemesis New York City FC on Saturday afternoon, and the showdown will mark the latest chapter of a rivalry that has grown significantly in terms of intrigue, excitement, and venom since the two clubs’ first meeting in 2015.

“If you watch our games, there’s a lot of anger on the field,” Red Bulls striker Bradley Wright-Phillips said earlier this week during a Media Day hosted by the league. “I know a lot of their players don’t like our players and the same for our players not like them. There’s some real hate there.”

The bad blood on the field has spilled into the stands. Supporters from both sides have a real animosity toward one another, which can make for both ugly scenes in the streets and gorgeous ones in stadiums.

Red Bulls fans arrived and then it got nasty. Feels like England in the 80s... pic.twitter.com/VJIKyDYlC3

MLS is hoping for the latter on Saturday when the Red Bulls and NYCFC collide, but it might be tough to have fans tone down their distaste for one another given that the two teams just squared off in a U.S. Open Cup game a week-and-a-half ago. The Red Bulls were victorious in the elimination bout that night, winning 1-0 to improve its all-time series record against NYCFC to 6-1-0.

While such a paltry run of results—one that includes an unforgettable 7-0 shellacking—might force teams to change things up, NYCFC plans to stick to its guns. The club’s tactical approach of building out of the back may play right into the hands of the Red Bulls’ high press, but NYCFC believes it can finally get a result at Red Bull Arena and turn the tide on this rivalry by staying true to its identity.

“We’ve played some good football lately,” said NYCFC head coach Patrick Vieira. “Even when we lost to them in the cup, I was quite satisfied with the way that we tried to develop our game. I think in that game we were a bit unlucky, especially in the first half.”

Unlucky or not, there is no denying that the Red Bulls has the mental edge going into this fixture. Jesse Marsch’s squad has had NYCFC’s number from the start, but will play arguably the strongest NYCFC team in history. With David Villa leading the way by continuing to play at a high level and with talented young midfielder Yangel Herrera available for selection again, NYCFC should prove quite the formidable foe for Wright-Phillips, Sacha Kljestan, and the rest of the Red Bulls.

The star players will be there on Saturday and so too will the passion and vigor. It should be a doozy.

The league’s main event this weekend may take place in the New York market, but another marquee match-up that you will not want to miss will happen on the other side of the United States on Sunday.

The day’s lone fixture will see the Portland Timbers welcome the Seattle Sounders to Providence Park for the latest installment of their long-standing rivalry, and it will now take place at night instead of in the afternoon because of concerns over warm temperatures.

Cooler weather will likely not make this game any less heated. On top of having decades of history against one another, both the Timbers and Sounders will be eager to bounce back from subpar midweek results. Portland surprisingly suffered a 3-2 loss to Minnesota United and Seattle gave up a last-gasp goal that robbed it of a win in a 1-1 home draw with Orlando City.

As such, prevailing on Sunday will be even more imperative for the two sides from Cascadia. Being on the end of two poor results in a span of five days is bad enough, but it is only made worse if the latter comes against an arch-rival.

Portland-Seattle is not the only Western Conference game to warrant some Rivalry Week points.

The Houston Dynamo and FC Dallas are also set to meet, squaring off at BBVA Compass Stadium on Friday to quite possibly set the tone for the entire weekend. There are plenty of talking points in this one given how the clubs have played in recent weeks, but the biggest one might be Dallas playmaker Mauro Diaz potentially earning his first start for the club since last October.

Recovered from the Achilles’ injury that forced him to miss the playoffs in 2016, Diaz has been making cameos off the bench for FC Dallas as of late. His workload has been fairly light to this point—he has yet to play more than 29 minutes in a match—but the Argentine might be called upon to play a more substantive role against the Dynamo.

You could not blame Dallas if that were the case. Houston’s attack has proven to be plenty potent at home, and what better way to help pin a confident club back some than by fielding a talented attacker that can beat you with a pass, shot, or dribble?

Of course, FC Dallas could use Diaz for more than just his presence. Aside from the outlier that was the six-goal outing against Real Salt Lake on June 3, Dallas has scored just three times since mid-May. Things have gone cold up top, and Diaz starting might be the perfect remedy.

With so much focus being on rivalries this week, it could be easy to miss out on other interesting storylines in MLS. There are several, but the one that may start garnering more and more attention in the coming weeks is the play of Montreal Impact duo Ignacio Piatti and Blerim Dzemaili.

The two Designated Players have raised the level of Montreal since Dzemaili’s arrival in May, and they reminded us of that in a major way in last weekend’s 3-3 road draw against Orlando. Piatti finished with two goals and an assist while Dzemaili had one tally and a helper.

Now, their focus is on trying to go on the road and defeat Columbus Crew SC on Saturday. If Piatti and Dzemaili can build on their recent performances, then you will want to tune into this Eastern Conference encounter. Sure, it might not be a rivalry, but it could still be quite a show.