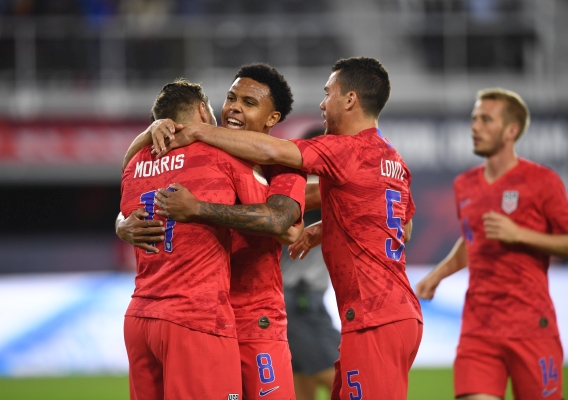 Thoughts on the USMNT's 7-0 Nation's League rout over Cuba

Heading into Friday, the United States national team knew a lopsided win was expected over Cuba. Gregg Berhalter's squad did what was expected with an easy win after a flurry of goals in the opening minutes. ASN's Brian Sciaretta chimed in with thoughts.
BY Brian Sciaretta Posted
October 11, 2019
9:00 PM
THE UNITED STATES national team easily defeated Cuba 7-0 on Friday night in Washington, DC to open up its Nation’s League campaign. The game was a complete mismatch as the U.S. team scored four goals inside the first 13 minutes to coast.

The first edition of the tournament has been met with skepticism among some fans and pundits for yet another CONCACAF tournament (with two Gold Cups also inside of one World Cup cycle) and in how it yet again reduces opportunities to play opponents outside of its region – which is one of the weakest in FIFA.

It’s tough have any real takeaways from a mismatch but here are a few:

U.S. team did its job

In getting rid of the first stages of the pre-Hex World Cup qualifying, this tournament is actually a step up as an improving Canada and the strongest teams in CONCACAF await.

But when any superior teams plays a minnow, it’s important to not play down to the level of the opponent and to take the opponent out of the game early. The U.S. team did that. An upset was never possible after the first few minutes.

Most importantly, it was visible that the U.S. players were finally having fun on the field. That hasn’t been the case for some time. A very tricky game against Canada awaits and this game actually gave the U.S. team optimism and momentum heading into that game.

McKennie and Morris stood out


Obviously, the best two individual performances came from Weston McKennie and Jordan Morris. McKennie had a hat trick and an assist. Morris had a goal and three assists. The two connected very well together.

Sure, the opponent was week but for both players, it was consistent with a positive trend with their performances that dates back to over a month. Morris has been playing at a high level for the past month with Seattle. He was also one of the best performers for the U.S. team in what was a subpar September window.

McKennie has also been a regular starter for Schalke which has climbed the Bundesliga table in recent weeks. While finding a regular position has always been elusive so far for McKennie, he can thrive in attacking roles and his quick hat trick came with his nice movements in the box.

Taking both of these players out at half, ensured that both Morris and Mckennie as well as those who replaced them, Paul Arriola and Tyler Boyd, have only played 45 minutes ahead of Canada.

Jackson Yueill also played well against Cuba and his passing was important in getting the ball to dangerous places out wide. Defensively, however, he was untested and that is where the U.S. team needs the most improvement in the No. 6 role.


Berhalter will try to keep in-tact most of what worked best against Cuba. McKennie and Morris are likely to start. Christian Pulisic will start again and playing both games this window will help him amidst his lack of playing time at Chelsea.

Paul Arriola and Josh Sargent picked up knocks against Cuba and their status will need to be evaluated. If Sargent is healthy, is this the moment where he replaces Gyasi Zardes in the starting lineup for a big game?

One potential addition against Canada could be the return of DeAndre Yedlin who only recently returned from injury with Newcastle United. It was never likely Yedlin would be able to start both games this window but with him rested against Cuba, it increases the chances he starts against Canada. That being said, Reggie Cannon has been solid for the U.S. team in recent months.