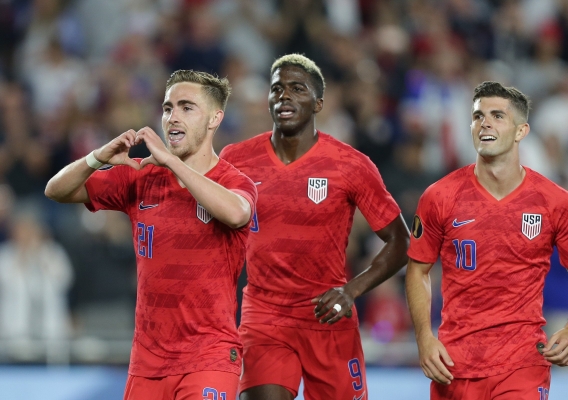 The United States national team got its expected win over Guyana on Tuesday night. It wasn't great, but it wasn't bad either. ASN's Brian Sciaretta writes about the performance and what to make of it.
BY Brian Sciaretta Posted
June 19, 2019
12:00 AM
THE UNITED STATES national team defeated Guyana 4-0 on Tuesday night at Minnesota’s new Allianz Field to open its 2019 Gold Cup campaign. It was the team’s first non-friendly in 20 months and while it was hardly a great performance, perhaps it will provide some momentum for the weeks ahead.

The U.S. team started shaky but got on the board with a nice goal from Paul Arriola. Then in the second half it began to dominate with two goals from Tyler Boyd and an accidental goal from Gyasi Zardes.

The game came at a potentially big cost as Weston McKennie was forced out in the second half with an apparent hamstring injury.

Here are three thoughts on the game


Tyler Boyd is looking like a great recruit from new manager Gregg Berhalter. The team needed more playmakers from the wing positions and Boyd looks like he has the ability to provide that. He was exceptional in the second half of the season for Ankaragucu in Turkey and is carrying that over into the USMNT. With two goals in the win, it was strong statement.


Brace yourself! Tyler Boyd has landed for the #USMNT ?????

He brings a quality that can potentially make the rest of the team better. With elite 1v1 dribbling skills, he can stretch defenses and open up space for teammates. Opposing defenses can’t sit back and easily absorb the U.S. team’s attack. For other U.S. attackers who are good at making runs – players like Paul Arriola and obviously Christian Pulisic, they will have more space to operate with Boyd on the field.


While not the MOTM, Paul Arriola also had a good performance and wasn’t stuck at the “wingback” performances. His 1v1 skills aren’t at Boyd’s level but they are decent and will only be more effective in an improved U.S. attack.

A lot more space out wide in #USAvGUY, so the #USMNT wingers were the difference makers.#GoldCup pic.twitter.com/a12rTjNGQM

His first goal was just a well-timed run and solid finish. Having Arriola and Boyd both on their games could do wonders for the U.S. team.

McKennie’s injury is a massive concern


Weston McKennie left the game in the second half grabbing his left hamstring and this is a massive concern for the U.S. team. For one, the number of ball-winners that the U.S. team has is dwindling. That was a big reason why the team had such a poor game against Jamaica before the tournament – it wasn’t disruptive defensively and allowed Jamaica to do whatever it wanted.

When Berhalter was hired, he stressed the U.S. team’s style as being one that will create chances from being a disruptive force. But to do that, it needs Tyler Adams and Weston McKennie. It has already lost Adams for this tournament and it is hard to see how the team functions defensively in the midfield without McKennie either.

It also brings up another point that as promising as the current generation of young American players is in Europe at the moment, many of them are missing a lot of time due to injuries. Their durability is a question at the moment.


Guyana is the weakest opponent the U.S. team will face in the Gold Cup and you don’t want to read too much into it. The U.S. team should walk away with a comfortable win – and it did. This was better than the early performances of the 2015 Gold Cup where the U.S. team was outshot and outplayed by opponents like Haiti and eventually had its worst Gold Cup ever.

What U.S. fans can hope for is momentum from this effort. The pre Gold Cup friendlies were terrible for the U.S. team and a lot of that wasn’t really a gap in talent, but rather everyone playing below their potential. Whether that is a problem adjusting to Berhalter’s system or the players not fitting into their roles, the team was completely disjointed.

The win was expected but whether this game was positive will be determined in whether or not the team grew from it and can start to play to its potential. If McKennie is out, it will be hard but it will force others to step up.