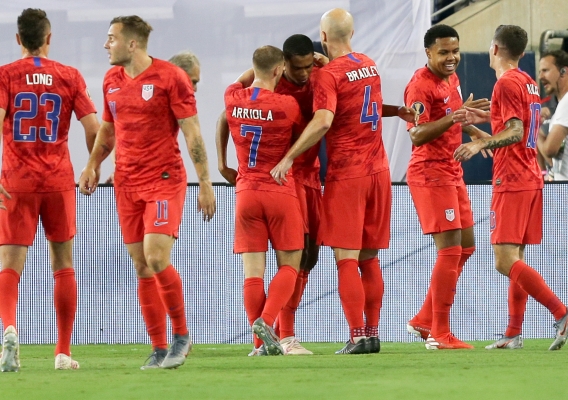 The USMNT defeated Jamaica 3-1 in a game that was hampered by a long weahter delay. It was far from perfect but it was a positive statement from the team. ASN's Brian Sciaretta breaks it down.
BY Brian Sciaretta Posted
July 04, 2019
8:00 AM
THE UNITED STATES reached the 2019 Gold Cup final after a 3-1 win over Jamaica on Wednesday night in Nashville. Aside from a 10-minute stretch in the second half, the U.S. team was in control throughout. Next up is a matchup against archrival Mexico on Sunday in Chicago with the trophy on the line.

The United States came out flying and created numerous changes. It took the lead in the 9th minute on a beautiful team goal when Michael Bradley played a well-hit arching pass to Reggie Cannon on the right flank. Cannon then sent the ball into the box with his first touch. Jozy Altidore made a very slight touch on the cross which found an on-rushing Weston Mckennie, who slammed the ball in from close range.

In the 16th minute, the game was halted for nearly an hour due to lightning. When it resumed, the U.S. team was not quite as sharp.

But in the 52nd minute, the U.S. team took a 2-0 lead when Weston McKennie played Jordan Morris into the box. Morris beat his defender and hit a shot to the far post that Jamaican goalkeeper James Blake could hold onto and instead pushed it back out into the field. Christian Pulisic was in the right place at the right time and slammed in the rebound.

After the goal, Berhalter elected to make a change and take Jozy Altidore out of the game. Altidore had been playing well but was on a yellow card and Berhalter, presumably, wanted to rest Altidore for the final. His replacement, Gyasi Zardes, however struggled. Within minutes, he badly missed a 1v1 with Blake

Then in the 69th minute, Zardes lost the ball in a dangerous area in his own half. Jamaica pounced down the right side and Shamar Nicholson was able to head home a cross from Leon Bailey.

In the 89th minute, the U.S. put the game out of reach when Paul Arriola hit a hard shot from distance that Blake had to make a diving save. Once again, Pulisic was there for a close rebound for a 3-1 lead.

There is still a long way for the team to improve, but it was the best showing of the tournament and will give it momentum heading to the final against Mexico.


This was a great game from Weston McKennie that went far beyond his goal. McKennie hit some huge passes throughout the game that created multiple big chances. In the first half he hit a phenomenal ball that played Arriola out wide. Then in the second half he played Zardes up the middle only for the Crew forward to missing the chance.


Christian Pulisic’s impact on the game was not in his two goals off rebounds. The Hershey native was able to create space for many of the other players in the attacking positions. His dribbling in tight space often drew multiple defenders which was able to escape and have open teammates as a result.

Pulisic has a lot of freedom and can drift out wide or remain in the middle. That will make him difficult to defend and if he can build up a healthy chemistry with the wingers and fullbacks on the left side, it should routinely generate a lot of chances.


Michael Bradley had a very good game against Jamaica. Not only was it his best game of the Gold Cup, it was his best game since 2017. His passing was on-point and he was able to hit passes from a long-range. That is how the first goal was created.

But defensively, Bradley was far improved than previous games as Jamaica wasn’t comfortable playing through the middle when they had the ball. While the U.S. team is deservedly the underdog for Sunday’s final against Mexico, if Bradley can play as well as he did vs. Jamaica, the U.S. team might have a shot.


In the backline, Reggie Cannon and Aaron Long had particularly strong outings. In central defense, Long was instrumental in cleaning up whenever Jamaica would generate chance. Just before the halftime whistle, Long made a series of tackles on one play that ended a decent chance.

Cannon, meanwhile, was impressive at right back both in his ability to get forward as well as competently defend. As is the case in Berhalter’s system, the right back joined the midfield in the attack and Cannon looked very comfortable.

Moving forward beyond this Gold Cup, there is competition at both positions but it looks like Long and Cannon are progressing towards securing their places in the top 23-player roster.

Morris and Arriola on the wings


The wing positions against Jamaica were uneven but ultimately positive. Jordan Morris was very sharp at the start but went quiet for long stretches after the weather delay. Through the first 45 minutes, he had the fewest touches on the ball among all U.S. midfielders, wingers, or forwards.

But Morris was still pretty solid when he managed to touch the ball. In the opening minutes, he should have had an assist on a first-rate pass to Arriola – whose shot was saved by Blake. Then in the second half, Morris made the run and hit the shot that created Pulisic’s first goal. The challenge for Morris will be getting into position to see more of the ball, not what to do with it when he gets it.

As for Arriola, he wasn’t great but he was very scrappy. As always he puts in a solid defensive shift and can win balls. He tracks back well and there was a moment in the second half when Jamaica was pressing for an equalizer and Arriola hustled inside his own box to make a diving block a Jamaican shot.

Then towards the end, he made a nice play to get open for his great strike from distance that forced Blake into a diving stop – again put in by Pulisic off the rebound. The United States doesn’t have that many threats from distance but Arriola seems to be one of the few.

While Morris is aiming for a spot likely to be backup on a first-choice U.S roster, Arriola’s skillset will likely keep him in contention to start. Even when he’s not at his best, like he was against Jamacia, he can still have a positive impact on the game.


Aside from two nice place against Trinidad & Tobago, it has been a rough tournament for Gyasi Zardes. The game against Jamaica was a low point. It’s not the missed chances that are the problem. It’s the turnovers, often due to his first touch, which blow the shape of the team apart and sometimes force it into emergency defense. The U.S. team looked out of synch since he came on and his turnover was the main factor on the chance which resulted in Jamaica’s goal.

The problem with Jozy Altidore has always been his ability to stay healthy for a long stretch of time. Far too often he is either injured or rusty because he’s attempting to comeback from a long layoff. If he’s playing well, he’s good. But the U.S. team desperately needs backups and Zardes’ highlights this issue as opposed to solves it.

Josh Sargent had a legit case to be on this team but there are plenty of question marks surrounding him as he didn’t even reach 200 minutes for Werder in 2019 (while also not playing for the reserve team to get minutes). Sebastian Soto isn’t ready quite yet. Bobby Wood had poor season and his future in Germany has questions. There are no real domestic options making strong statements just yet.

Altidore will almost certainly start in the Gold Cup final. After that and heading into 2020, it will be interesting to see how he reshapes the forward pecking order.