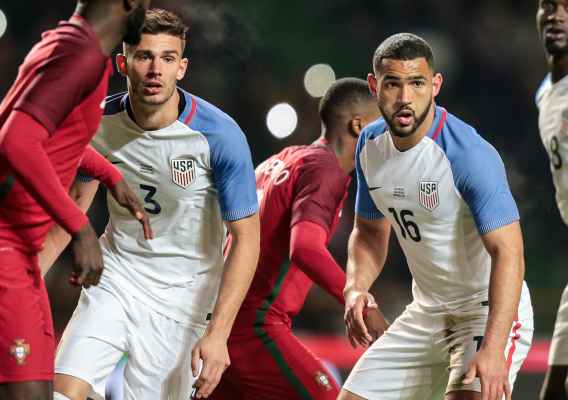 Thoughts on the new USMNT roster

For those that haven’t been following youth national team, the roster will have a lot of surprises. For those that have been tracking prospects, the roster makes sense. There are a few surprising omissions. Sarachan explained that Christian Pulisic is not on the team because it is an important time for Dortmund and there is a huge game against Bayern Munich following the Paraguay game.

Below is the roster as well as my thoughts.

Can Novakovich boost the attack?

While the next generation of American players looks very promising, the lack of young forwards breaking through right now, either abroad or domestically, is a concern. One player who is bucking that trend is Andrija Novakovich, 21, who has 18 goals this season for SC Telstar – a club in the Dutch second tier who is in the middle of a tough promotional race. Novakovich is currently at Telstar while on loan from Reading.

The dearth of young forwards makes Novakovich a more important prospect than many realize. Josh Sargent is currently with the U-20 team since he is yet to play a professional minute. Rubio Rubin is on the roster but is still not fully integrated into Tijuana after two awful seasons in Europe. Bobby Wood is having a tough season with Hamburg.

Novakovich, meanwhile, arrives in the middle of having a very productive professional season. If he can translate that to the U.S. team, it will a huge addition.


One of the other newcomers on the U.S. team is left back Antonee Robinson who has played a high number of games for Bolton while on loan from Everton.

What is interesting for Robinson is that his first U.S. call-up will take place in Cary, North Carolina. It is a close connection for Robinson given that his father, also born in England, obtained American citizenship while playing for nearby Duke University. The elder Marlon Robinson featured for Duke from 1981 through 1984 and was teammates with John Kerr Jr. and Louisville head coach Ken Lola.

Robinson, 20, will now represent the national team for the first time in a place where his father has strong ties. As a fan of the Blue Devils, Antonee Robinson will now get to watch the NCAA basketball tournament near the Duke campus.

Battle for the number one goalkeeper


It will be very interesting in this camp to see if a possible battle emerges to take the number one goalkeeping spot. Bill Hamid has played in the previous two friendlies under Sarachan but is not a starter for FC Midjylland in Denmark. Meanwhile, Zack Steffen is one of the top goalkeepers in Major League Soccer with Columbus and has progressed up from the youth national team levels.

It wouldn’t be surprising to see both goalkeepers play a half but who will be in a stronger position after the January camp.


This game will also be the first time Erik Palmer-Brown and Cameron Carter-Vickers have made the national team together after being teammates on the previous two U-20 World Cup teams.

Carter-Vickers, 20, is now thriving again at Ipswich Town after falling off in his previous loan to Sheffield United. After impressing in his USMNT debut in November, he will be representing the national team for the first time on American soil in this camp.

Meanwhile Palmer-Brown, 20, is playing for Kortrijk in Belgium while on loan from Manchester City. These types of call-ups are huge for Palmer-Brown so that he could possibly obtain a U.K. Work Permit to play for Manchester City or other English teams.

Both Palmer-Brown and Carter-Vickers excelled with the U.S. U-20 team at the World Cup. Now they will be making their headway with the national team together.

Weah arrives in form from PSG


One of the more exciting call-ups on the team is Tim Weah who has made two appearances for Paris St. Germaine – one of the strongest teams in Europe. The son of former FIFA World Player of the Year George Weah, Tim Weah recently excelled for the U.S. U-17 team at the 2017 U-17 World Cup.

It is possible that Weah, 18, plays more regularly for the U.S. U-20 team inside of the next year but this call-up is a nice reward for his recent accomplishments.

The Mckennie and Adams partnership


Tyler Adams arrives in camp on the heels of a strong month for the Red Bulls where he has helped lead the team in the CONCACAF Champions League semifinals. Similarly, Weston McKennie will also be joining the team in the middle of a fine first season as a professional with Schalke.

Both players are 19 and have known each other well since their early teenage years. But both are now going to be asked to play like mature players despite their youth. McKennie and Adams have experience few on the team have. Against Portugal last November, McKennie shined and Adams had a strong game as well.

These two could be the core of the U.S. national team central midfield moving forward. Paraguay will be yet another test to the strength of their partnership.