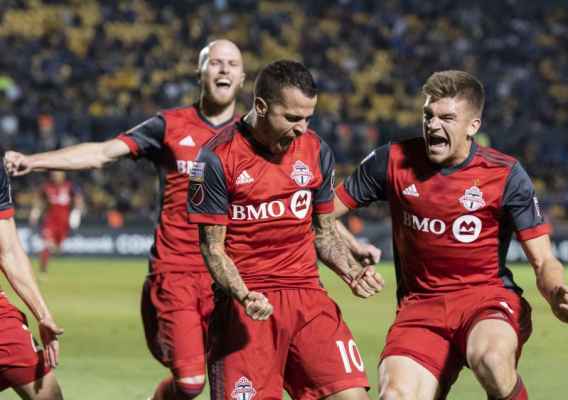 Thoughts on the big night for Toronto and New York

It was a huge night for MLS teams in the Champions League as the Red Bulls routed Tijuana and Toronto ousted tournament favorites Tigres. Brian Sciaretta breaks it down
BY Brian Sciaretta Posted
March 14, 2018
3:20 AM
THERE IS A VERY GOOD case to be made that Tuesday night was the best day in the history of Major League Soccer. The Concacaf Champions League has always been seen as an albatross around the league’s neck where it struggled mightily against teams from Liga MX.

The unfortunate reality is that a Liga MX team is still likely to win the Champions League again even if Seattle can get past Chivas tonight. Club America is the best team remaining. But last night was a firm indicator that the gap is narrow.

There have been a few rare times when an MLS team has gotten past a Liga MX team but typically it required something wild or miraculous – such as Cameron Porter’s stoppage time goal to send Montreal past Pachuca on away goals.

These games were convincing. Despite being fresh out of preseason, the Red Bulls demolished Tijuana 5-1 on aggregate. Toronto defeated a Tigres team that is truly an elite Liga MX team and one of the best teams outside of the top leagues in Europe.

Advancing past Tigres is perhaps the most impressive accomplishment an MLS team has ever done. At one point, it had a multigoal advantage over Tigres on aggregate in Mexico. Tigres scored two late goals to make the serise closer than it really was - a 4-4 draw with Toronto advancing on away goals.

If Seattle can get past Chivas tonight, a true statement will have been made regardless of Club America’s potential to win the title.

But the remaining MLS teams will have the advantage of having the semifinals take place in April, a month into the regular season.

Here are my thoughts on last night’s game.


This accomplishment was orchestrated behind two younger American coaches in Toronto’s Greg Vanney and New York’s Jesse Marsch. Both of who built a deep, and talented roster consisting of many domestic players.

New York and Toronto both have the ability to go a long ways in this tournament and this season because of an impressive system. They both have star players, but can win without them. When playing against top opposition, their players rise to the occasion and play within a detailed game plan.

In particular, the Red Bulls have such a strong system right now because their depth comes through its USL team. Players that move up from the Red Bulls II to the first team are prepared and ready to contribute. Tijuana had one of the best defenses in Liga MX but the Red Bulls beat them with a resounding 5-1 win.

The national team job is now vacant. It is way too early to say who should get the job because it is not yet known who will be available. But Marsch and Vanney should, at least, get interviewed for the position of they are interested in the job.

In 2018, Bradley Wright-Phillips has a strong case to be considered as the best forward the league has ever seen.

While it is still just 2018, he is having an amazing start to the year. In the round of 16, he had a phenomenal assist to Danny Royer in the away leg against Olimpio. In the first leg of the quarterfinal against Tijuana, he scored two goals with the second coming after he dribbled through three defenders. In the season opener against Portland, he came off the bench and scored the goal that sealed the game. Then against Tijuana in the second leg, he was part of all three goals with two assists – the second being one of the plays of the tournament.


This pass from BWP who has been the best player in the #SCCL, so far pic.twitter.com/7nRqOza5pw

The result is that Wright Phillips has been the best player of the Champions League so far.

But Giovinco has also been one of the best players in MLS history and he delivered on Tuesday night – big time. He forced an away goal to give Toronto a crucial lead. Then his magnificent free kick goal won his team the series.


Sebastian GIOVINCO of @torontofc scored the @RocketLeague Goal of the Game against @TigresOficial | #SCCL2018 pic.twitter.com/c5SD7ujJLl

Designated players are important to the league because they raise the standard of play. Giovinco and Wright-Phillips are two of the finest additions the league has made in its history.

So far in 2018, roughly 60% of the minutes in the first two weeks of the season have gone to foreigners. But Toronto and New York have done things completely different.

With MLS in its third decade, clubs are taking very different approaches. Atlanta is a very good team but it is done mostly with young South American players behind a legendary foreign coach. New York City FC has a similar feel.

New York and Toronto are built on the backs of American players and coaches with the impressive designated players throwing the teams over the top.


Tyler Adams, 19, had a great year in 2017. He broke out at the U-20 World Cup and was an everyday starter for the Red Bulls. Gradually Marsch gave him more and more responsibilities and was rewarded with a national team cap. Now he is a major contributor to the team.

Last night the teenager showed his maturity. Tijuana entered the game down 2-0 but came out flying, scoring the opening goal. Just when it appeared as if Tijuana was going to make a comeback, Adams put the Red Bulls back on top by two with a great counterattacking run. That goal essentially ended the series.

A lot is asked of Adams right now and last night he delivered in a very important game. It’s another sign that he is developing well.


Congolese defender Chris Mavinga, 26, was exceptional in the game with goal saving defensive plays and critical tackles that broke up dangerous plays from Tigres before they materialized. Without him, Toronto would not have advanced. Like others, this has been a tournament where Mavinga has raised his game. Toronto came into the game with a defensive mindset and Mavinga was the anchor in the back.


.@RocketLeague Replay 23' A close one for @TigresOficial! A left cross from Gignac was finished off by Jesús Dueñas but @torontofc’s Mavinga avoided the goal, controlling the ball with his body | #SCCL2018 pic.twitter.com/7DI7a60rHq

If Toronto is going to advance past Club America, Mavinga will need to continue to be on top of his game.