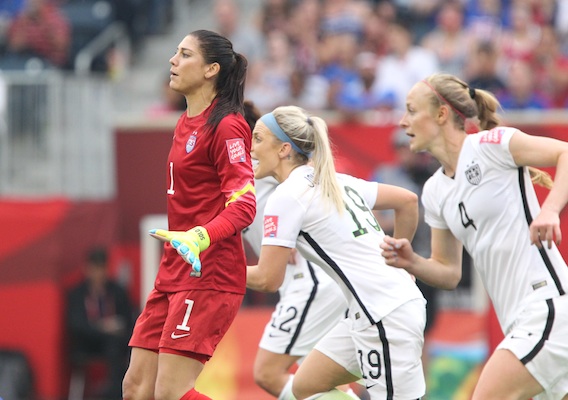 The Yanks Won, But How Did Each Player Perform?

Hope Solo: With off-the-field issues dominating the conversation after an incendiary Outside the Lines report that came out this past weekend, Solo showed that her focus has never been sharper with a superb display against a strong Australian side. She saved brilliantly off the crossbar in the 5th minute, and made an even better save off a volley just eight minutes later. She was blameless on the Australia goal, and she commanded the box all game long as the Australians continued to attack throughout the second half. All told, it was a stern reminder of why she is the best keeper in the world. Rating: 7.5

Ali Krieger: Krieger’s rating depends somewhat on your assessment of how much defensive help she received from right midfielder Christen Press. On the surface, it wasn’t pretty, especially early. The Matildas picked out the U.S. right flank as their chief attacking location in the first half, and Krieger was given the runaround on several occasions. She looked much stronger in the second half once the game settled a bit more in the U.S.’s favor. Rating: 5

Julie Johnston: Johnston’s stock has seen a meteoric rise in the build-up to the World Cup, but the 23-year-old had a debut to forget, squandering a few presentable scoring chances and looking shaky on defense. Most concerning was her defensive misstep early in the second half that let Australian striker Samantha Kerr free on goal. Thankfully for the U.S., Becky Sauerbrunn arrived with a crucial intervention. Johnston showed some moments of quality, but we may see Christie Rampone in her place next game. Rating: 5

Becky Sauerbrunn: Sauerbrunn was immense for the Americans in their opening match, most notably on the aforementioned bailout of Johnston in the second half. If things continue as they did, she’ll need to stay sharp to cover for the leaky U.S. midfield all tournament long. Rating: 7.5

Meghan Klingenberg: Klingenberg was a bit MIA on Australia’s goal, as she vacated the left back slot and left Lisa De Vanna in acres of space for the Australian equalizer. She failed to get into the attack as much as she usually does, which adds up to a disappointing night for the U.S. left back. Rating: 5

Lauren Holiday and Carli Lloyd: The U.S.’s center midfield pairing looked in danger of being overrun in the opening stages of the game, but they recovered nicely in the second half. Many have criticized coach Jill Ellis for refusing to play a true defensive midfielder, and that criticism looked valid here. Each had a few impressive moments, notably Lloyd’s tackle that started the sequence for the U.S.’s third goal. Rating: 5.5

Christen Press: Press is much more of a forward than a midfielder, but she made the most of her start, scoring the winner for the U.S. with a brilliant side-footed finish. Her defensive effort was not in question, but she still needs some seasoning in terms of positioning. This writer wouldn’t mind seeing Press replace Abby Wambach up top, but that seems unlikely. Rating: 6.5

Megan Rapinoe: Pretty much everything Rapinoe touched turned to gold (as well as goals) in a masterful opening match performance. She scored twice, impressing with her turn into space that preceded her deflected opener, before delivering the impressive game-sealer in the second half after a lengthy run. Further, her feathery first touch and beautiful chipped through ball to Sydney Leroux set the U.S. up for the go-ahead goal in the second half. She had a few questionable moments in possession, but those are to be forgotten on a night where she did so much well. One note: she’ll need to be extra careful to not pick up a second yellow card, after she got a soft first one tonight. Rating: 8.5

Abby Wambach: To be blunt, Wambach did very little well on a night to forget for the U.S. legend. She missed a few presentable scoring chances, and offered very little in the buildup. The U.S. insisted on sending long balls her way, and she rarely won headers. It was very surprising to see her last the whole 90 minutes; a super-sub role seems more appropriate on the basis of this performance. Rating: 4.5

Sydney Leroux: Leroux struggled to get involved for much of the game (perhaps due to the long-ball heavy U.S. attack), but she still managed to make a huge impact when it counted, delivering the game-winning assist to Press after a surging run down the left flank. Her cutback was excellent, and set Press up well to finish to the far post. A solid start, and there should be more to come from the dynamic Leroux. Rating: 6

Tobin Heath: Heath oozed quality after coming on, and her insistence on maintaining possession with short passes helped the U.S. see out the game in a much more impressive manner than they started. Heath has been a contributor to this team for a long time, and her experience showed in a very nice cameo. Rating: 7

Alex Morgan: Morgan got about 12 minutes to get some World Cup minutes under her belt. She looked a bit rusty, but even so, offered more holdup play in her brief appearance than Wambach did all game. It’s hard to make too big of an assessment on her fitness, but the knee looked pretty good—it would be a huge lfit for the U.S. if she truly is at (or even near) 100%. Rating: Incomplete

Morgan Brian: The U.S.’s youngest player got her feet wet with a late cameo. Any World Cup experience is probably a good thing, especially with Holiday picking up her first yellow card of the tournament (a second would bring a one-game suspension). Rating: Incomplete

Jill Ellis: She got the win, and in the end, it was comfortable. But big questions remain. The U.S. was very lucky to be tied at halftime, and much of that comes down to the wide open 4-4-2 that Ellis chose for the Americans. And even as the U.S. took the lead, the long ball heavy approach persisted until the closing stages. She’s drawn plenty of criticism over the past year, and this performance won’t make her exempt from further questions. Rating: 6

Those are our ratings—share yours in the Comments section below.

Blake Thomsen is a frequent ASN contributor. Follow him on Twitter and let him know what you think.