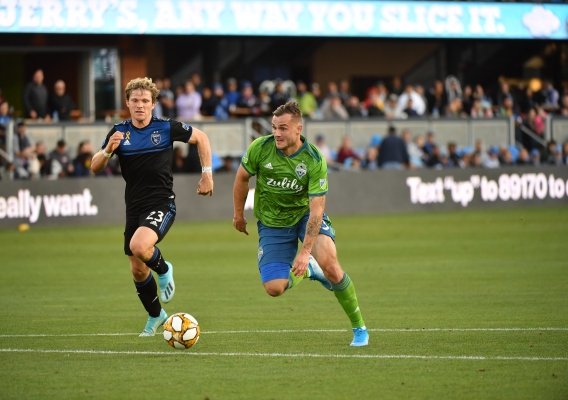 The West is a Mess, Hamid saves, Revs clinch, and much more

While the Eastern Conference is set with several teams playing well and setting up an interesting playoffs, Sunday's games leave the West into a mess of mediocrity and chokers. ASN's Brian Sciaretta takes a look.
BY Brian Sciaretta Posted
September 30, 2019
9:00 AM
THE 30th week of the MLS season is in the history books and it sets the stage for what will be both an interesting and disappointing Decision Day next Sunday.

For one, the Western Conference playoff teams will finally be decided, but is a battle of very undeserving teams at this point. The way the teams are playing down the stretch with so much on the line takes a lot of the excitement out of the final day. What is particularly disappointing is that the Colorado Rapids are the most deserving team as of late, and while they are alive, their odds are slim.

Right now, it is Dallas, Portland and San Jose in essentially a group where two teams are going to make the playoffs but none of them deserve it. San Jose has lost five in a row and Sunday showed they're beating themselves more than anything. Portland drew over the weekend following winning just two out of its previous eight – where all eight were at home. Dallas and its youthful approach hasn’t been rise to the occasion.

The East has been far better the past month. All the playoff teams are now decided with the Revolution clinching a spot on Sunday with a win over New York City. The thought of New England in the post season was once unthinkable from preseason and until the club finally pulled the plug on Brad Friedel.

The teams that all clinched playoff spots the final two weeks – DC United, the New York Red Bulls, Toronto FC, and New England Revolution – did not back into the playoffs the way the Western teams are. These are all teams that went out and got the necessary results and should enter the playoffs well. It will make the Eastern playoffs far more intriguing knowing these teams can all find ways to win.

Here are some thoughts on the weekend


Bill Hamid was outstanding in Sunday’s 0-0 draw against the Red Bulls. His second half save against Cristian Casseres was one of the best saves in the league this season given the shot was from close range and Hamid was saved. But it was also critical to the team’s fortunes


One of the best saves of the season from Mr. Hamid pic.twitter.com/fOPIblK3WM

This save gave DC United the result it needed to be in a position where it is unlikely the Red Bulls or anyone else will overtake them for fourth place on Decision Day – since DC United hosts a terrible Cincinnati team. Because of Hamid, DC United will likely secure hosting a playoff game in the first round.

The Red Bulls weren’t bad in this game and the team is doing the things it needs to be doing in order to make a run in the postseason. This team is built on a solid backline that was underachieving for most of the season but has lately been terrific. With the scoreless draw against DC United, the Red Bull backline hasn’t conceded a goal in 270 minutes.


The Galaxy are going to attempt to do something that is very hard to do – score its way through the playoffs. A 4-3 loss at home to the woeful Vancouver Whitecaps made it clear that this is the only option for the Galaxy right now. Heading into decision day, the Galaxy has conceded 55 goals – which is the worst among any team in playoff positions of either conference.

The Galaxy boast Cristian Pavon and Zlatan Ibrahimovi? so perhaps they have enough talent to get it done. But this team is so uneven that it is going to be so unlikely that the Galaxy call getting into an offensive shootout and win against good teams three or four times in a row.

The Revolution get it done


Heading into the weekend, it looked like the Revs had a good chance to advance to the playoffs – although with its final two games against New York City and Atlanta, it would probably take some sort of backing in to get the job done.

Instead, New England did what you want to see from the Western bubble teams but haven’t done so – seizing the moment. The 2-0 win over New York City was the highlight of the team’s turnaround and one that is going to force teams to take it a bit more seriously come the playoffs.

If you are Atlanta or Philadelphia, hosting New England isn’t automatic – especially with the team full of confidence. Gustavo Bou might be the newcomer of the year with nine goals in 1065 minutes.


I agree with those who say that the problem with FC Dallas isn’t its young core but rather the inability of the club to find consistent veterans to fill out the roster. Then when you incorporate the face that players like Paxton Pomykal and Brandon Servania have dealt with injuries while Jesus Ferreira has shuffled positions, it’s remarkable the team is even in a playoff race.

I maintain that what FC Dallas is trying to do is admirable. The team has invested in its academy and is giving them meaningful minutes. The 3-0 loss to Colorado wasn’t pretty and it was a tale of two teams heading separate ways. If Colorado had been run by anyone other than Anthony Hudson the first 11 games, Colorado would be in the playoffs now.

Instead, Dallas will have one more game to prove itself. It still controls its own destiny. It’s opponent, Sporting Kansas City, will have nothing to gain or lose. That could make it a dangerous opponent. But can Paxton Pomykal drag his team across the finish line?


Minnesota’s 1-1 draw against Los Angeles FC proved yet again that it can hang with the best team in the league. There is a lot to like about this team right now in the way it is playing under Adrian Heath and on Sunday it will have the potential to secure the second seed in the Western Conference when it visits Seattle.

Michael Boxall gets behind the LAFC defense to pull @MNUFC level. #MINvLAFC pic.twitter.com/JSZm9rPCla

The playoffs is about consistency and having a Plan A, Plan B, and a Plan C. That’s the problem with the Galaxy and Seattle. If Zlatan or Lodeiro is out, who can win games? Minnesota has those options. If the team can secure homefield advantage up through the Western Conference Finals, there chances of getting that far are pretty good. Plus, don’t write LAFC in pen as getting that far.


So how will this mess pan out. First of all this is a three team race. Colorado has a shot, but winning at LAFC is a very tall task.

Regarding the rest, the fact that Portland hosts San Jose means that someone is guaranteed to get at least a point on Decision Day. But Portland is playing better than San Jose. San Jose's stoppage time loss to Seattle must have been deflating. While the team’s recent 10 game homestand was a dud, the Timbers still have an edge in this game just by virtue of the fact nothing suggests San Jose has the ability to win a game like this. Even without the suspended, Brian Fernandez, the rest of the Portland team has played in games like this.

If Portland wins this game, it will be hard for Dallas to not hold onto the seventh and final spot, win, lose, or draw. The safe bet is that Dallas finds at least a way to manage a draw against Sporting Kansas City that will be missing several key players.