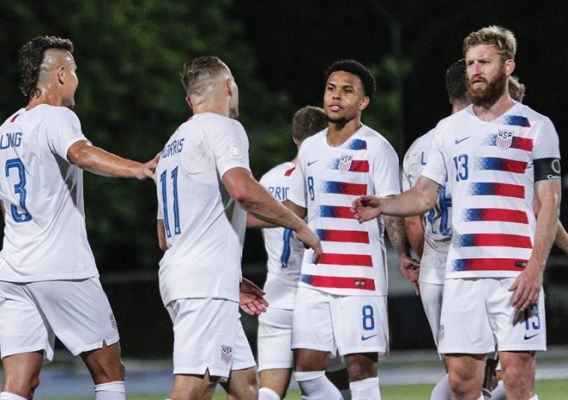 The United States national team concluded its rocky 2019 year with a 4-0 win over a poor Cuban team. That win ensured that the team advanced to the semifinals of the Nations league and perhaps gave it some momentum heading into a massive 2020. ASN's Brian Sciaretta chimes in.
BY Brian Sciaretta Posted
November 19, 2019
10:00 PM
THE UNITED STATES advanced to the semifinals of the inaugural CONCACAF Nation’s League on Tuesday after a pedestrian 4-0 win over a poor Cuban team in the Cayman Islands. The U.S. team needed a win to advance and came away with the necessary three points thanks to two goals each from Josh Sargent and Jordan Morris.

The U.S. team did what any heavily favored national team needs to do when facing a minnow. It scored early to quickly crush the opponent’s dream of an upset. It also avoided injuries while playing on a divot-covered field against a frustrated opponent. This game will be quickly forgotten inside the coming days but the U.S team handled the game and the situation well.

Like the first time the two teams met in the tournament during the October window in Washington, DC, the U.S. team scored inside of the first minute. This time it was Josh Sargent who muddled a low-driving cross from Paul Arriola home.


Here is Josh Sargent’s goal. I believe Paul Arriola will get credit for the assist #USMNT pic.twitter.com/V0AXMpFr9d

The next goal game in the 26th minute when a Jackson Yueill pass was flicked on by Weston McKennie. That eventually sent Morris in alone for an easy finish and a 2-0 lead.


Here is the goal from Jordan Morris to give the #USMNT a 2-0 lead on Cuba. The Seattle native is finishing out a very solid 2019 - rebounding from a lost 2018 due to an ACL pic.twitter.com/lStDk3CFab

Morris struck again the 39th minute when Aaron Long had the ball in a dangerous position in the box. His attempt at a chipped cross deflected and was heading into the net. Just before it crossed the goal line, Morris slammed it home to give the U.S. team a 3-0 margin it would take to the locker room for half.

The final goal of the game came in the 66th minute and it was the nicest one of the night for the U.S. team. Reggie Cannon began the play with a cross across goal. Before it crossed the endline, Tyler Boyd backheeled a ball to Sargent who easily converted his second of the game.


I love backheel assist from Tyler Boyd off the cross from Reggie Cannon. pic.twitter.com/qanA0waZvV

From there the U.S. team was able to see out the game without any difficulties or injuries and finished its group with nine points – tied with Canada but with a superior goal differential to claim a spot in the Nations League in June.

It is misleading to read too much into games where there is such a mismatch in talent, but here are a few quick thoughts.


The best two players in the game, not surprisingly, were the two players who scored two goals: Josh Sargent and Jordan Morris.

For both players, this performance did not come in a vacuum as both players have had great years in 2019.

For Josh Sargent, he has begun to start a lot of games and earn a lot of minutes with Werder Bremen. It’s a season where he is building off of his impressive 2018/19 season where he made his debut. Now he is starting to show more qualities on a weekly basis.

For Jordan Morris, he turned the page on a brutal 2018 season which he missed recovering from ACL surgery. Morris reclaimed his starting spot in Seattle’s lineup and he was key towards the team winning an MLS Cup – the second title for Morris. He has also locked down a starting wing position for the U.S. team and is dangerous every game. Even against good opponents, he is finding ways to make plays (scoring and nearly assisting vs. Uruguay, drawing a penalty vs. Mexico in New Jersey, having a shot vs. Mexico saved off the line in the Gold Cup final in the team’s best offensive chance).

Both players should be part of the team in 2020 as World Cup qualifying approaches.

There were struggles
Not all of the players stood out. Daniel Lovitz had a poor game where he nearly conceded a penalty in a close decision and he gave up a dangerous free kick to Cuba. Overall, he was rusty as he mistimed a defensive header in the second half which gave up a chance, and got turned the wrong way once.

Christian Roldan and Weston McKennie were fairly average in the middle of the field and neither were part of creating many chances.


The success of Jordan Morris and Josh Sargent shouldn’t have been surprising given the positive form from both players.

For players who stood out in a little more surprising fashion were Jackson Yueill and Tyler Boyd. Yueill had a bad turnover midway in the first half but overall was a good ball distributor in a deeper-lying midfield position. He also was willing and eager to get into the scrappy defensive play that position sometimes demands.

It was a bit tougher for Tyler Boyd since the U.S. team took its foot off the gas pedal when he came in to start the second half. It took him awhile to see the ball on a regular basis but once he did, he was regularly involved. His backheel assist served as a reminder that Boyd still has a lot of quality. Minutes haven’t come easy for him at Besiktas but he recently scored in the Europa League in a loss to Braga. With this assist and that goal, perhaps Boyd is setting himself up for a better year for club and country in 2020?


The U.S. national team is now done for 2019. In 2020, it will be a huge year to show progress and the games will become far more important. The entire selection of players won’t be available until the March window. There will be the annual January camp for domestic-based players but some of these players like Yueill and Cannon might focus on the U-23 team ahead of March’s Olympic qualifying tournament in Mexico.

For U.S. Soccer, the U-23 team in 2020 will hopefully expand the player pool as several players such has Paxton Pomykal, Richard Ledezma, and Brenden Aaronsson make strides towards the full national team.