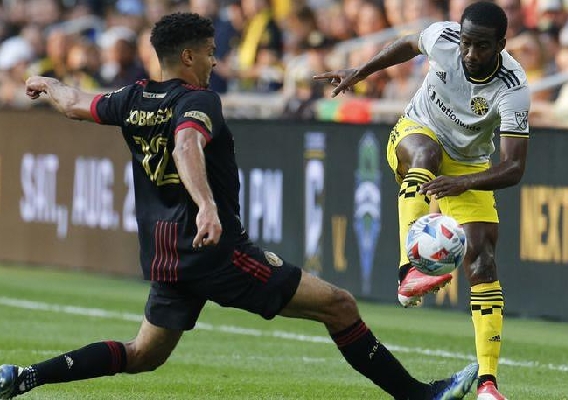 The Play Your Kids movement continues to bear fruit as the league continues to get younger. Meanwhile Dallas and DC United are surging. There is hope for Atlanta while the Red Bulls are crumbling. ASN's Brian Sciaretta offers up his thoughts on the weekend.
BY Brian Sciaretta Posted
August 09, 2021
10:00 AM

THE 26th MLS season is in the summer months and it is a time were some teams simply rise and others melt. When looking at the games from the weekend, we saw Atlanta rebound, FC Dallas continue to surge while the Crew, the Red Bulls, and LAFC are all in deep trouble.

Here were my observations from the weekend.

The “Play Your Kids” movement in MLS has probably had its best year and it’s not like that this year’s group of young players is much better that the last three years, but this past year has made it more clear that the model is sustainable. In other words, MLS club didn’t just sell off a bunch of players recently and were left with nothing. Now they’re showing they can regularly churn out players.

This past weekend really stood out and here were the best of the bunch.

Paxten Aaronson: despite Philadelphia’s 2-1 loss to New England on Sunday, Aaronson was great in his first start for the Union. He scored his team’s only goal and became the only player to beat Matt Turner in 630 minutes. He also won 8/10 duels and was 3/3 in dribble attempts. The younger Aaronson is set to be a key part of the U-20 team this cycle and take a growing role within Philadelphia.

Quinn Sullivan: the 2004-born American attacking midfielder was impressive for Philadelphia in the loss and was 24/25 in passing. He nearly scored an equalizer but was denied with a great save by Turner.

Jack McGlynn: the third young player for Philadelphia to impress despite a loss. The 2003-born central midfielder was 51/56 in passing and was 3/4 in his long balls.

George Bello: the U.S. national team left back starting the Gold Cup final against Mexico and acquitted himself well in his return to Atlanta United. His backheel assist was critical to the 3-2 away win over Columbus. The 2002-born Bello is quietly having a good season, despite Atlanta’s struggles.

Indiana Vassilev: In 2020, Vassilev made his Premier League debut with Aston Villa but last season had a pair of tough loans to Burton Albion and Cheltenham Town. Now on loan to Inter Miami, the 2001-born American midfielder scored the winning goal in a 2-1 victory over Nashville.

Gotta be happy for Indiana Vassilev who made his Premier League debut in 2020 but had a pair of tough loans in England last season. Now he scores the winner for #InterMiamiCF tonight pic.twitter.com/OCXoajYCyM

Ricardo Pepi: One of the jewels of the 2003-born year didn’t score in a 2-0 win over Austin FC but played really well in the attack and he has helped open the attack for FC Dallas lately.

Jesus Ferreira: Since coming back from injury, the 2000-born Ferreira has been excellent for FC Dallas  and he scored a very nice goal – his second straight game with a goal. He’s not always consistent, yet, but when he’s good, he’s very good.

Kevin Paredes: The DC United winger has taken his game to another level. He is very tough to stop when he is on his game, like he was in Saturday’s 2-1 win over Montreal. He was 15/15 in his passing, won 7/10 duels, had three shots, and drew four fouls. He is one of the best young players in the league right now.

Atlanta United dug themselves a hole and are operating under an interim staff. That being said, this team is too talented when firing on all cylinders to count out – and they’re getting close to that.  With the Gold Cup momentum behind him, Miles Robinson could be a “DP level” central defender. George Bello is continuing to have a nice season. Now the key will be Josef Martinez and having him continue his improvement from his ACL tear. He was suspended on Saturday, but scored midweek.

Check out the skill on back-heel assist from #USMNT left back George Bello. Pretty goal from Barco/Bello. pic.twitter.com/NNSTlqGmgv

On Saturday, Atlanta United defeated Columbus 3-2 on the road in a game where things seemed to be trending the right way. Atlanta looked like a team with life and the confidence. When you throw talent into the mix, they’re a tough team to bet against. This was a huge win and they now have four of their next five at home.

Columbus meanwhile has had serious problems. They haven’t been able to generate chances and the midfield has not lived up to expectations. On days when the team scores multiple goals, it still struggles to get results. Neither of the goals were scored from the run of play as well – one off a corner and the other off a penalty.

FC Dallas has won three of four and has accumulated 10 out of 12 points in that span. All of their previous results have come against good competition. Saturday’s 2-0 win over Austin FC wasn’t against a quality opponent but Dallas did what it had to do – convincingly beat a weaker team. That’s easier said than done.

Luchi Gonzalez is rolling with the kids over the typically disappointing foreign imports – and the results have improved. The FC Dallas academy bears fruit – and not just for European teams. That is important to keeping the sustainability of their model going.

I thought Jesus Ferreira was solid tonight - scoring again. His 2nd goal in 3 games. He’s streaky and not always consistent, but he’s playing well right now. Tonight he was dangerous but also steady on the defensive side too pic.twitter.com/tlcxtXkwb2

Jesus Ferreira scored another nice goal. Ricardo Pepi was a handful up front and is one of the league’s breakout players of the season.

It’s a test of depth right now too – and Dallas is passing it. Justin Che is injured and the club remains cautious in their approach with Paxton Pomykal – who was subbed out at halftime against Austin with a tight hamstring.

Dallas is playing well but its upcoming schedule is tough – home games against Sporting KC and Seattle followed by a three-game road trip at Houston, Austin, and Real Salt Lake.

Red Bulls are in trouble

The New York Red Bulls are in trouble and Saturday’s 2-1 loss to Chicago was telling. The once promising forward combination of Patryk Klimala and Fabio are disjointed and, at times, selfish to a fault. The midfield chemistry just isn’t there.

The team is an example of how one problem throw and entire team off. Since Aaron Long’s injury, central defense became the team’s biggest problem. But it didn’t stop there. Now the team can’t create chances and score goals. Chicago scored two early goals in this one (the first was just a great play by Luka Stojanovi?) and the Red Bulls have had no answer. Central defense remains a problem, but it has dragged down everything else.

"One more time, a big lesson for my group, for me, and my coaching staff. We expected a tough game away, but in the end, we crashed our mindset with some mistakes in the first eight minutes."

Two games ago, the Red Bulls had a 2-1 lead on the New England Revolution late. Instead, it was the Revs who won the game thanks to two late goals. Since then, the Red Bulls have played Cincinnati to a 0-0 draw and now a loss to Chicago.

The team is out of gas and its high press is creating nothing.  The players appear frustrated. So what’s next? A trip to a struggling Montreal on Saturday. is probably the last hope. If they can win that, they have momentum heading into a four game homestand.

As for Chicago, they’re playing much better these days but have just one more game at home (against Columbus) before starting a six-game road trip and it’s hard to see them making a climb with that in the way.

At the start of the season in April, new DC United manager Hernan Losada said his team didn’t have the fitness to play his style for more than 65-70 minutes. Losada, however, refused to compromise and fought through the early season struggles. It was questionable, but it has paid off and right now DC United is surging in mid-August, with three wins and two draws in their last five games.

On Saturday, DC United posted a 2-1 win over Montreal in Canada and there is so much going right for Losada and company. Ola Kamara is playing like a Best XI right now, the youth of Paredes and Nyeman are producing. Andy Najar is having a great comeback season and Paul Arriola is returning to form.

Is DC United going to be able to keep this high-pressing system up? Right now, you have to like their chances. The players all look really comfortable under Losada they’re in much better shape than a team like the Red Bulls.