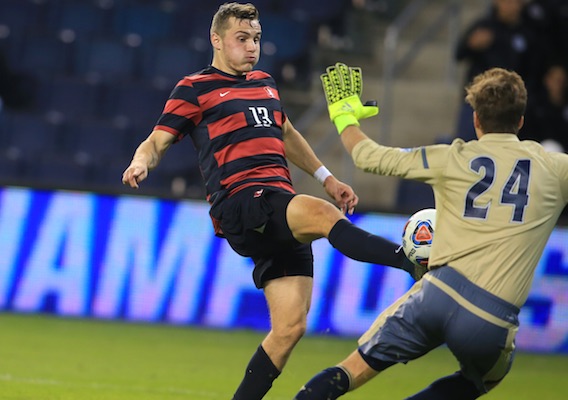 The 10 American Soccer Players to Watch in 2016

As a new year brings new hope to the United States men's national team, ASN's Brian Sciaretta shines a light on the 10 players he will be monitoring closely as the Copa America Centenario approaches.
BY Brian Sciaretta Posted
January 04, 2016
9:00 PM

IT'S WELL DOCUMENTED that 2015 was a rough year for the United States men's national team. Unfortunately for Jurgen Klinsmann and U.S. Soccer, that sad state of affairs has left 2016 with more questions than answers.

For the 2015 Gold Cup and CONCACAF Cup, Klinsmann called on the core from his 2014 World Cup team—and those players came up short. That now has many on the team at a crossroad with questions surrounding them as the new year begins. Here are 10 players that will be well worth watching in 2016.

Without a doubt, the No. 1 player to watch is Jordan Morris. Morris, as you no doubt recall, was the first college player in more than two decades to become a regular player with the national team. But now that he has won a national title with Stanford, all signs are that he is turning professional with the Sounders on a deal that would make him would make him the highest paid player in league history directly out of college.

How will he fit into the system with Obafemi Martins and Clint Dempsey? Will he play 2,000-plus minutes in his rookie season? And how will he handle the expectations of being a full national team player at the start of his MLS career? He is going to be the most interesting rookie to follow in the league's history.

Last year Matt Miazga played in three major international youth tournaments, emerged as one of the best central defenders in MLS, and even made his national team debut in World Cup qualifying—which eliminated any possibility he would play for his parents' native country, Poland.

Entering the final year of his contract with the New York Red Bulls, Miazga wants to move abroad. Given the year he just had, he will have options and appears ready to seize the opportunity. His stock has never been higher given his age and pedigree.

He has to be careful, though.Playing time is crucial and if he makes the jump to one of Europe’s top leagues, playing time will be hard to come by for a 20-year-old central defender. Would he be able to negotiate a sale and a loan-back to the Red Bulls to ensure he is a weekly starter?

Then there is the question as to how this affects his national team status and whether or not he continues his rise within the team. Either way, by this time next year he is likely to be in vastly different position.

In 2015Borussia Monchengladbach midfielder Fabian Johnson enjoyed one of the best-ever club years for an American player.

Transferring that success to the national team on a consistent basis remains a challenge, however, especially since he doesn't have a consistent position under Klinsmann. Johnson had a very good World Cup in 2014 while playing right back but his offensive numbers at Borussia Monchengladbach while playing in the midfield are just too difficult to ignore.

So the real question will be if Johnson can translate his club form over to the international game. Not every player can but as of now he is has the most untapped potential in terms of helping the national team turn things around.

John Brooks has always had superior talent and plenty of potential but he has been called out several times in the past by coaches in Germany for a lack of focus.

This season, however, has been tremendous for the Berlin-born Brooks, who has been invaluable with Hertha as the Bundesliga club contends for a spot in European play. As of now the big issue is whether or not Hertha can lock him up to a long-term contract extension—which further reflects his soaring value at the moment.

Despite his memorable goal against Ghana at the 2014 World Cup, Brooks has failed to lock down his place as a clear starter. Expectations for him will be raised in 2016 and it will be disappointing if he can not force himself into the starting lineup at the Copa America Centenario.

It's no secret that Klinsmann loves Jermaine Jones. The enforcer has almost always been a starter on the national team when healthy and once saw time in central defense in an attempt to prolong his international career.

The problem is that Jones will be 36 at the next World Cup. Last season he fought through injuries and he is out of contract to start the year (and will serve a suspension whenever he finds a new team). Will he still be a key player forthe U.S. at the end of 2016? There's no guarantee that he will.

The year ended on a very strong note for Geoff Cameron, who was finally given an extended run at his preferred central defensive position and has played well for a Stoke City team that has impressed this year.

Cameron, 30, is not young anymore but appears to have a few good years left in him. Internationally, it is hard to know just how highly Klinsmann rates him but the fact remains that the Massachusetts native is the only American outfield player who plays regularly in the Premier League.

Cameron has played three positions for Stoke: defensive midfield, right back, and central defense. All three positions are a bit unsettled at the national team level. It seems like there should be a huge opening for Cameron to be an integral part of the U.S. squad—but where?

Aron Johannsson is a skillful forward who can score in a variety of ways—from long-range or with crafty maneuvers inside the box. He reads the game well and is a very smart player.

The problem is that he is often injured and as a result has not become an important part of the United States team yet. He was not at 100% at the World Cup, he missed the CONCACAF Cup against Mexico, and he missed the start of World Cup qualifying.

Still injured at Werder Bremen, eyes will be on Johannsson to see if he can finally stay healthy. If he can, it would be a huge boost for both Werder Bremen and the United States.

A longtime veteran of the United States national team, Altidore has a history of inconsistent play. It's no coincidence that when he is playing well, the national team tends to get results. If the Americans intend to compete well at the Copa America Centenario, Altidore will have to be healthy and in good form—two things that have been elusive for quite some time.

Injuries limited his involvement at the 2014 World Cup and he was not even close to 100% at the 2015 Gold Cup. Eventually things have to break his way, right?

While 2015 was a bad year for Klinsmann's squad, it was a great year for Bobby Wood, who scored goals against the Netherlands, Germany, Mexico, and St. Vincent and the Grenadines. . Meanwhile, his performances in the 2.Bundesliga with Union Berlin have also been solid despite the team hovering near the bottom of the table.

Wood is certainly a player to monitor. Can he continue his accent at a time when there are so many important questions at the forward position? Questions like: Will Altidore rebound after an uneven 2015? Will Johannsson return to health anytime soon? How much gas does Clint Dempsey have left in the tank? Is Jordan Morris going to play when he turns professional? Is Rubio Rubin going to be ready soon? Will Juan Agudelo ever step up?

Ventura Alvarado ended 2014 in terrific fashion, starting for Club America in the Liga MX final. That showing earned him a shot on the United States team in 2014, and during this time Klinsmann saw much to like—even if soccer analysts were more critical of the Phoenix native.

The problem is that Alvardo struggled for most of the year and he even lost his spot in the starting lineup with Club America. In fact, he only played 478 minutes in the Apertura and has only played 1,795 minutes so far in Liga MX. Despite this, Klinsmann apparently still has faith in Alvarado. But will this continue if he continues to ride the bench at Club America? Only time will tell.