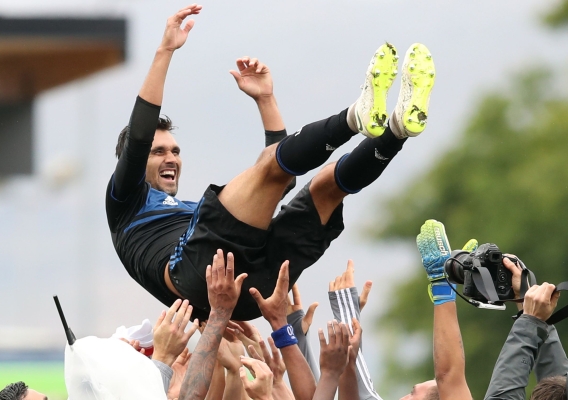 Red Bulls and Atlanta are quickly becoming one of the best matchups in MLS and this weekend was no disappointment. Also, keep an eye on Jackson Yueill and Brendan Aaronson. All that and more as Brian Sciaretta walks around the league during Week 12 and tells you what he sees.
BY Brian Sciaretta Posted
May 20, 2019
9:00 AM
WEEK 12 of the 2019 MLS season brought some interesting results and continued to change many of the narratives from earlier in the season.

The Galaxy’s struggles continued, Atlanta’s recent rise under Frank de Boer was stalled, Alejandro Pozuelo hasn’t been able to keep Toronto afloat, and DC United might not be the best in the East. This is a turnaround from a few weeks ago when DC United looked to be the best in its conference, Pozuelo was too much for any team to handle, de Boer finally had Atlanta under control, and the Galaxy were soaring under Guillermo Barros Schelotto.

But some of the consistent narratives also remained. Cincinnati’s roster is poorly constructed, Matias Almeyda has San Jose trending upward, the Red Bulls win with local talent, and the direction in Columbus is worrisome.

Here is a deeper look at the top stories


Atlanta came into this game in New Jersey with five straight clean sheet wins. The Red Bulls have been up and down – although showing more signs of finally playing up to their level.

Red Bulls and Atlanta is budding into a great rivalry even with the teams in very different situations from last season. The intensity was there at Red Bull Arena even if it wasn’t the most well-played game. Last year, both the Red Bulls and Atlanta were offensive juggernauts but this one was a defensive showdown.

When Tim Parker picked-up a 35th minute red card, Chris Armas faced big questions in how he was approach the situation. There have been some criticisms with how Armas has changed the team from Jesse Marsch but Armas continues to nail his substitutions.


The Red Bulls have the best system in the league in terms of linking its USL team to its first team. Everyone knows their roles and it allows for a seamless transition between the first and second teams. That is how the Red Bulls can get by without top players and why local kids and second-round draft picks can fill the voids.

Remember how last season the Red Bulls got past Atlanta in the regular season game where it essentially won the Supporters Shield? In that game the Red Bulls were without Tyler Adams and Bradley Wright-Phillips. This game was similar.

But Tom Barlow remains an interesting player to track simply because his numbers have been so outstanding for Red Bulls II in the USL (16 goals in 32 games). We don’t exactly know what his floor is yet because he’s been a very good goal scorer at the PDL, college, and USL levels. He scored the winner against Atlanta in just his second game.

For Atlanta, the team is still on the right track but it is still not scoring enough goals. This team has been defensively strong but its margin of error is still razor thin. That shouldn’t be the case with its offensive talent.

But the intensity of the Red Bulls – Atlanta rivalry is very good. The players and coaching staffs do not like each other. You could feel that at Red Bull Arena and that’s a good thing.


The Revolution played to a 0-0 draw with Montreal over the weekend. Bruce Arena is still yet to announce when he will be on the sidelines for New England but it doesn’t seem like a happy place. Expect a lot of turnover in the next 18 months.

At 30’ Castillo is substituted obviously with a big disappointment and talk back from the player; at 59’ Fagundez comming off with the same actitud and refusing to shake hands with the coach, at 61’ Penilla launches a ball to the stands ... #NERevs ????‍?????? #MLS


Philadelphia and Seattle pitted two of the best teams in MLS against each other and the result was a 0-0 draw. Philadelphia was the better team but was unable to crack Seattle’s bunker, despite having many clear chances. But the fact that Seattle bunkered against Philadelphia tells a lot about how good Jim Curtin’s team is right now.

The best chance of the game came from Brenden Aaronson. The talented U.S. teenager otherwise had a great game but he blew the chance. For Aaronson, he understands that to take his game to another level, he needs to be more clinical. It is easy to see the New Jersey-native moving abroad in the years ahead but he has some areas to work on.

In a good piece for Philly.com, Jonathan Tannenwald noted how the Union players all believe in Aaronson and that Aaronson is certainly not denying where he needs to improve.

“He needs to be sharp. He needs to be hard on himself. He needs to know that the balls need to go in,” Haris Medunjanin said. "He’s still an 18-year-old guy, on this level, to play like that, and he’s an amazing player like he showed today. If he could reward himself with a goal, [he’d] win the game for us."

“The first ball that he had, I think if he controlled it very good there, he could shoot the ball. But in these kinds of moments, you need to be more sharp," he added. “I think that’s the only thing that [Aaronson] needs to understand as a No. 10: that he needs to score goals and give assists. That’s what they’re going to judge you after, especially in Europe. If you are a No. 10, you need to score goals.”

Philadelphia is already a very good team and is one of the best surprises in the league. The roster is well put together with young players and key veterans. If Aaronson, however, takes his game to another level this year, the Union might just sit atop the East when all is said and done.

San Jose: glimpses of past and future


The San Jose destroyed a sinking Chicago Fire team 4-1 on Saturday but there were two takeaways that were really cool. First, Chris Wondolowski became the all-time leading scorer in the history of the league after scoring all four goals. A nice guy, a hell of a competitor, and a strong person who had to endure a lot for his World Cup miss in 2014, he clearly deserves the record and the accolades.

For San Jose, it is also seeing the emergence of another young American star in Jackson Yueill who is having a stellar season in the league and certainly could be one like Brenden Aaronson who could find himself in Europe sooner than later. Coincidentally, both Yueill and Aaronson were among the last players cut from the U.S. U-20 team (Aaronson this current year and Yueill in 2017).

“I think he's one of the players with the brightest futures in this league, especially being born in the United States,” San Jose head coach Matias Almeyda said of Jackson Yueill. “In terms of soccer, he is very complete and I see a big European future for him. He's a player that trains very well, and when he plays in games, he plays the same way he trains.”

After a rough start Almeyda has done a great job so far with San Jose, and it is encouraging that he is helping to foster a bright young American talent.


Two of the most prominent teams in the league are mired in slumps. Toronto has one point in its last four games and the LA Galaxy have lost four in a row. Both teams are coming off of poor seasons so a complete turnaround should be unexpected.

But for Toronto, it appeared as if Alejandro Pozuelo was going to change this team’s fortunes singlehandedly. He was off to an unbelievable start but when Jozy Altidore is missing due to injury or playing less than 100%, Pozuelo is containable. The team still leaves way too much space for opponents and this was shown in the 3-0 loss on Saturday to Real Salt Lake. Bofo Saucedo’s goal was well-taken but he had acres of space and watch Michael Bradley lose Saucedo while looking to mark an RSL run (which never happened).


Terrific goal from Bofo Saucedo who I think will factor into the United States U-23 team for Olympic qualifying pic.twitter.com/mvemB9jyMY

Attacking-wise, the team isn’t clinical. It played to a 0-0 draw with DC United midweek despite having 75% possession and creating 35 shots. When it doesn’t have the ball, it is vulnerable because it concedes too much space.

Toronto will still win some games this but it is hard to see the team being a contender at the moment – especially if Altidore is out injured or missing with the national team due to the Gold Cup.

The LA Galaxy should be worried right now. It’s one thing to have a slump, it is another to be shutout at home by the Colorado Rapids – a team that is shockingly bad a defense. Even without Zlatan, this team should win a game like that.

Guillermo Barros Schelotto is doing a good job but this team is not deep and the roster has several holes. Zlatan can only cover up so much. The addition of a little more creativity in the midfield and forward depth will help a lot. But until that help arrives, they need wins in the games ahead. The upcoming schedule is very favorable with games against Orlando City, the slumping Sporting Kansas City, New England, and FC Cincinnati.

Pepi's Goalazo in USL League One


Down in USL League One, U.S. U-17 forward Ricardo Pepi scored this goalazo off a free kick to help spark a North Texas SC comeback in a 2-2 draw vs. Lansing. It was less than 48 hours after Pepi played in the U-17 CONCACAF Final against Mexico - which the U.S. team fell 2-1 to Mexico in extra time.