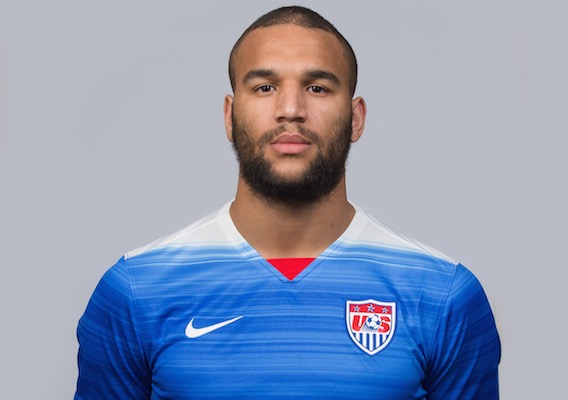 The 25-year-old U.S. international has not played in a competitive match since December 2014, but he is fully healed now and is looking forward to resuming his career with Bundesliga side RB Leipzig.
BY Brian Sciaretta Posted
August 30, 2016
4:45 PM

LONG-TERM INJURIES are brutal for all athletes, but they can be especially troublesome for soccer players. New coaches tend to come and go, replacements are brought in on a regular basis, and those with serious physical maladies face mental and emotional challenges as they try to recover their bodies—and their spot in the lineup.

Terrence Boyd, 25, played his last competitive game on December 7, 2014, when he suffered a knee injury and was subbed off in the 37th minute of RB Leipzig’s 1-0 loss to Ingolstadt. Earlier that summer, he suffered a partial ACL tear but attempted to play through it to start the 2014-15 campaign—his first for the 2.Bundesliga club after joining from Rapid Vienna.

The start to his Leipzig career lasted just seven games and 353 minutes. But in the game against Ingolstadt, the partially torn ACL became a complete tear and surgery was required. It is a rough injury but not rare in the soccer world. Payers with this injury typically miss six-to-nine months.

For Boyd, however, various setbacks accompanied the surgeries. For the German-born Boyd, it led to confusion and frustration.

“It wasn't just the ACL,” Boyd told American Soccer Now from Germany. “There were complications—and you don't know what to do.”

In total, he went through four separate procedures with the final one coming late spring of this year. Looking back at the last 20 months, Boyd shares a remarkably frustrating experience but still carries that optimistic tone that made him such a popular player with supporters and teammates at both the club and international levels.

“Oh no, no, no—I was almost done,” Boyd said when asked if he always knew he would eventually return to the field. “There was a point when it went on for one-and-a-half years, maybe about a half-a-year ago, we were thinking about if I ever come back. We were talking about other stuff like getting a job within the club. The club was helping me a lot but it was crazy because you don't know what to do—if you're going to play again or if it's worth it.

"There were set backs every three months. I had four surgeries. It was crazy. Coming back four times and being disappointed every time is crazy.”

Still, Boyd used the time away from the game to improve his life: He enrolled in school and took marketing classes: “I wanted to challenge myself mentally and not be dumb and watch television shows every day,” as he puts it.

Most importantly, he is the new father to a baby daughter which has given him a mature perspective on life.

In addition to his dealings with the staff at Leipzig, Boyd kept in contact with the U.S. national team and Jurgen Klinsman during his recovery. Boyd says it was uplifting to hear from the national team staff and to know he was not forgotten by a team he loves. But not only was he not forgotten, at one point he says Klinsmann helped to arrange a trip to Munich with other American players Josh Gatt, Joe Gyau, and Aron Johannsson who were all attempting to return from long-term injuries. The group rehabbed together.

Boyd went through a lot in his comeback but the turning point came in the spring when doctors took one final attempt to fix his knee.

“There was a moment toward the end of the season where we just like, 'Fuck it. Let's have a last shot.'" Boyd recalled. “Before that we were always so cautious about the knee where I could only do this or that. Suddenly the knee was all right and it didn't really react that badly. It was a real wonder. It was a miracle.”

Boyd eventually returned to RB Leipzig ahead of its 2016-17 preseason—and in a higher tier. The club had earned promotion to the Bundesliga during his time away. His first practice came on July 11. Boyd performed well in subsequent friendlies, scoring against FC Frankfurt on July 17 and against Wuerzburger Kickers 10 days later.

Boyd's progress did not go unnoticed at U.S. Soccer, and in fact surprised Jurgen Klinsmann's assistant, Andi Herzog. According to Bild, Herzog traveled to Germany to check in on the forward, who had not made an appearance for the Stars and Stripes since coming on as a 90th-minute sub in a 2-0 loss to the Ukraine on March 5, 2014.

"I did not expect him in to be in this type of form. Terrence is a fighter.” Herzog told Bild. "He needs some more match practice. But if he continues like this, he will soon be a candidate again for the national team.”

Boyd was flattered by Herzog's comments but remains cautious about discussing the U.S. national team:  “I have to play these reserve team matches," he said, "but if I make it back to the first team, then we can talk. Right now, it's just a long shot.”

Boyd continues to follow the U.S. national team closely and speaks with some of the players. He enjoyed watching the team make a run to the semifinals of the Copa America and he is also intrigued by Christian Pulisic, a “magnificent" talent according to Boyd.

The upcoming few months will also be a challenging time for the German-American after he regains his fitness and sharpness with Leipzig’s reserve team. RB Leipzig has added an impressive forward contingent that includes Austria's Marcel Sabitzer, Denmark's Yussuf Poulsen, and Sweden's Emil Forsberg—all of whom are full internationals. The club also features Davie Selke, who won the silver medal at the recent Olympic Games with Germany's U-23 team. Boyd, 25, is the oldest of the bunch.

So competition for playing time will be tough at the high-spending club but Boyd is optimistic and determined he will pick his career up where he left off. He enjoys being surrounded by the high level of young talent on Leipzig. He also thinks it is a great fit because the team plays with a high-pressing style which reminds him of his time with Borussia Dortmund.

For now, though, he has a newfound perspective on the game and is not taking anything for granted.

“It's still a long way to go but my knee is heathy and it's fit,” Boyd said. “I can do anything at 100%. It just conditioning and being where I can go 90 minutes. This is not the case at the moment. I'm heathy and that is the biggest thing that matters right now.”