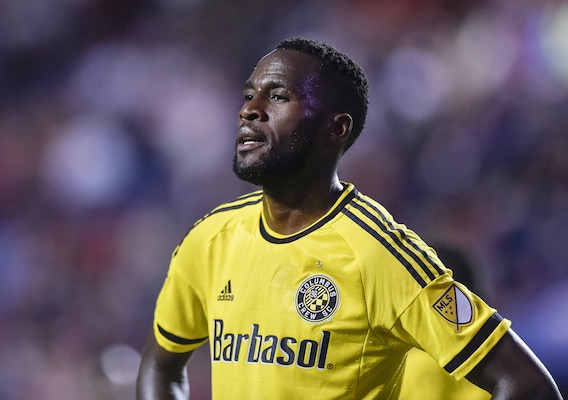 With one eye on the senior squad and the other focused on qualifying for the 2016 Olympics, Jurgen Klinsmann announced a 23-man roster featuring a mix of established veterans and promising up-and-comers.
BY Brian Sciaretta Posted
January 06, 2016
5:00 PM

JURGEN KLINSMANN today announced a 23-player roster for the annual January camp that will conclude with friendlies against Iceland and Canada on January 31 and February 5. The roster also features 11 players who are eligible for the U.S. U-23 team which will attempt to qualify for the Olympics in March.

“As we always do, we start out our year with a January camp where we give the opportunity to the next wave of players to come in and make an impression and see if they are ready to step it up into international level, if they are ready to understand what it takes to become a National Team player,” Klinsmann said. “This camp will be a little bit different because we’re going to mix it with almost half-and-half with senior players that are already national team players or some that are older and maybe get the chance to play their first cap, and a lot of the Under-23 players that hopefully qualify us for Rio de Janeiro.

"So it will be more an identification camp. It will be more a developmental camp. We want to give those players a head start into their very busy year 2016, but we also want to make it clear to them that it’s a huge opportunity that you have here to understand what it takes to step it up and to become an international-level player.”

The purpose of this roster is to evaluate talent more than fielding a winning team but it is alarming that some of the team's persistent weaknesses remain. Looking at the current group of midfielders, all eight play centrally and all but Nguyen are defensive or box-to-box players. Among the defenders listed, only Eric Miller is a natural fullback who plays the position on a regular basis. Of the six forwards, only Ethan Finlay is naturally a wide player who, unlike Jerome Kiesewetter, plays on a regular basis.

In other words, the United States seems to be producing the same types of players. This isn’t Klinsmann’s fault because when you look across MLS or even abroad, producing playmakers or wide players is something that is a pervasive concern. There just aren’t many options for Klinsmann to choose from right now.

That being said, the crop of central midfielders looks very promising. Darlington Nagbe will likely see an increased role within the team this year while Wil Trapp was a big reason why Columbus surged in the second half of the season.

The roster comes in more or less as expected but that doesn’t mean there weren’t some head-scratching snubs.

Matt Hedges: The biggest snub on this roster by far is FC Dallas captain Matt Hedges, who was arguably the best central defender in MLS in 2015 (Laurent Ciman won the defender of the year award but Hedges committed far fewer fouls, captained a better team, and was never shown a red card). Hedges is mature, smart, talented, and also plays a position which the U.S. team still needs options.

Sebastian Lletget: The L.A. Galaxy midfielder has the ability to play out wide and in his first season in MLS he also showed he can create chances.

Dax McCarty: The New York Red Bull captain is a younger version of Kyle Beckerman and is the type of player who will do the dirty work and open up the game for others. He was a big reason why the Red Bulls won the Supporters Shield.

Ethan Horvath: Based abroad in Molde, Norway, Horvath plays in a league where players typically are released to play in January camp. The reports are that FC Dallas goalkeeper Jesse Gonzelez decided to play for Mexico in this camp despite receiving a U.S. call-up. The thing is that Horvath’s resume is even more impressive after playing very well in the Europa League. He seems to be the most deserving of U-23 goalkeepers right now to play for the U.S.

Benny Feilhaber: It’s a bit of a broken record right now regarding Feilhaber so his exclusion is expected. Klinsmann simply does not rate Feilhaber (even though he plays as a No. 10 which is a rarity among American players) and the Brazilian-born World Cup veteran is now over 30.

It was known in advance that the best U-23 players in MLS would be part of this team. It also was hardly a surprise that a player like Ethan Finlay earned his first call-up give his Best XI season in Major League Soccer. Still, there were a few surprises.

Tim Parker: The fact that Parker was not on the U-23 Olympic qualifying roster in October was very puzzling. The talented Long Island native had an outstanding rookie season for Vancouver and was one of the best young central defenders in the league this season. The St. John’s University product will now have a chance to push himself onto the U-23 team for the Olympic qualifying series against Colombia in March.

Tony Tchani: The naturalized U.S. citizen was a strong defensive midfielder for Columbus and attracted interest from Cameroon’s national team last fall where he only missed out due to injury. Is he set on playing for the United States fulltime now or is this another case like Tesho Akindele who accepted a January call-up from Klinsmann last winter but elected to play for Canada instead? Regardless, few expected Tchani to get the call for this camp.

Players with the most at stake

Not much will change for most of the players at this camp. Michael Bradley and Jermaine Jones will still be important players for the national team in 2016 and guys like Fatai Alashe, Matt Polster, and Jerome Kiesewetter will be priorities on the U-23 side.

But who on this roster has the most to win or lose? Every January camp at least one player emerges to become part of the team moving forward or some (like Feilhaber) see their stock sink. Here are some who have the most on the line in Carson.

Ethan Finlay: Although he is not the perfect player he is superb when he plays to his strengths—like getting into the open field and taking advantage of space. The bottom line is that the U.S. team needs wingers and Finlay could potentially give the team an option it currently lacks. He has a golden opportunity to prove himself and offer something moving forward.

Klinsmann even hinted at this regarding Finlay.

“The January camp has always been the camp of opportunities for players that badly, badly want to knock at the door of the senior national team and want to become a player of international status,” Klinsmann said. “Here we are giving that opportunity now to kind of already mature players like a Tony Tchani, like Ethan Finlay, or Luis Robles. You want these players really to come in and make a point and take that opportunity to try to come back into that group by the end of March and maybe play World Cup Qualifying.”

Darlington Nagbe: After his strong final few months of the 2015 season, it would be hard to see Nagbe fail to earn a lot of playing time in these two upcoming friendlies. If he does well, he could easily become a regular as the U.S. team move through qualifying and into the Copa America Centenario.

Lee Nguyen: The New England Revolution playmaker is the only true attacking midfielder on the roster and one of the very few in the pool. He has been part of the system for a while now but has never broken into the team. Is this his chance to take a step up? At 29, there won’t be many more opportunities if he has a poor camp.

Bill Hamid and Luis Robles: Right now Tim Howard and Brad Guzan are the top two American goalkeepers. Long-time third stringer Nick Rimando is not on this roster and there is an opening. Also, it isn’t really obvious how much longer Howard will continue to play and Guzan is struggling at Aston Villa. So there could be fresh openings on the U.S. team—but who will step up?

Kellyn Acosta: The U.S. U-23 team had many curious snubs last October. Parker was one, Paul Arriola was another, but Acosta’s absence was particularly hard to understand as he had a terrific season in the defensive midfield for FC Dallas. A strong camp from him could see him be part of the U-23 team which takes on Colombia.

What do you think of this roster? Who was snubbed? Which included player surprised you? Share your take below.