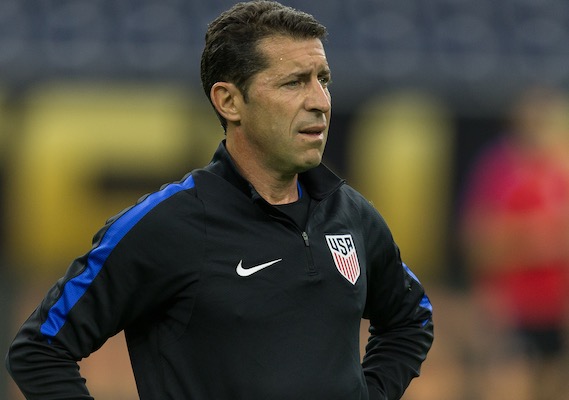 Tab Ramos to ASN: "You Have to Believe in the Team"

Reflecting on his team's successful World Cup qualifying run and CONCACAF Championship, the U-20 coach conveyed confidence in his team's offensive capabilities and laid out big goals for South Korea.
BY Brian Sciaretta Posted
March 10, 2017
7:20 AM

THE UNITED STATES U-20 men's national team qualified for the 2017 World Cup last week and then put an exclamation point on that achievement by winning the CONCACAF Championship for the first time in the team’s history. For head coach and U.S. Soccer youth technical director Tab Ramos, it will be his third time taking a team to the biggest stage of the under-20 age group.

In 2013, the U-20 team looked great in qualifying but was drawn into a brutal group with Ghana, France, and Spain—and failed to advance. The 2015 squad was one of the best U.S. U-20 teams ever, and it advanced to the quarterfinal before losing to Serbia in a shootout.

Every cycle produces different strengths and weaknesses and the 2017 team is no exception. Defensively it was rock solid in the CONCACAF Championship but goal scoring was down. Still, the team found a way to win while not always at its best.

Team captain Erik Palmer-Brown played out of position in defensive midfield and was named the Golden Ball winner for the qualifying tournament in Costa Rica. Marlon Fossey stood out at right back as did the central defense tandem of Justen Glad and Tommy Redding. Tyler Adams, 18, is also eligible for the 2019 U-20 team but is playing a big role with the 2017 squad.

American Soccer Now interviewed Tab Ramos on Wednesday, focusing on his observations on the tournament and how he sees the team evolving ahead of the U-20 World Cup in South Korea which is set to begin May 20.

AMERICAN SOCCER NOW: How meaningful was this elusive U-20 championship for you and how difficult of a feat was it to accomplish?

TAB RAMOS: It was important for our youth national team program, especially on the heels of all of our teams having had a great 2016. Unfortunately, most people outside of U.S. Soccer only judge our program by results. On the personal side, I am very happy to have been to two finals in the three cycles. We lost in extra time in 2013.

ASN: In the opening game against Panama, what went wrong and how did you get the team back on track?

RAMOS: We did not have a complete team until six days before that game, it takes a little time to build the team. Teams like Panama and Costa Rica can meet weekly for months at their training center to prepare. They were further ahead. We were still the better team in the game and should have won, although we were not at our best. We missed easy opportunities in front of the goal and the team gave it a good shot. So, for me, nothing went wrong against Panama except for the final score.

ASN: The best performers seemed to be in the deeper, central areas of the field (Redding, Glad, Palmer-Brown, and Adams) where Mexico and Honduras could get little going offensively. Do you see this as the core and the strength of the team in South Korea?

RAMOS: This group is very strong on the defensive side. We have to be even better to be successful at the U-20 World Cup. I am sure all of these players will be ready to step it up.

ASN: The decision to play Erik Palmer-Brown in defensive midfield worked out. Were you surprised by his performance? Do you think that is where you see him on this team moving forward?

RAMOS: It is an extremely difficult position to play. I already tried [Erik] in that position during the last cycle against some international teams at Dallas Cup. He can always be a center back because that is easier and depending on who we have available we may do that at some point but I think he is really talented so I want to continue to push him. I was not surprised by his performance.

ASN: Scoring from the run of play seemed to be a struggle for this team and center forwards Emmanuel Sabbi and Jeremy Ebobisse ombined for just one goal. Is that a concern for you and the team? Do you see a way to improve the offensive production heading toward South Korea?

RAMOS: On the attacking side, we led the tournament by a wide margin with 80 shots—next closest was Costa Rica with 61. So we did create the chances but it is concerning that we did not score more goals. Now that more of the players are in a pro environment for the next two months, hopefully there will be some improvement going into the World Cup.

RAMOS: There will not be a whole lot of turnover since our final 35-man list has to be in this month. I don’t expect too many players that we have not already had popping up to be on this list in the next two weeks.

ASN: You have frequently said that getting players released from European clubs is challenging. Is Christian Pulisic still unlikely as you said early in the cycle? Do you think there is a possibility we will see Gedion Zelalem and Cameron Carter-Vickers return to the team?

RAMOS: I am highly hopeful that Cam, Gedion, Weston McKennie, and Derrick Jones will be with us—as well as possibly Josh Perez. As far as Christian is concerned I think it is really difficult. He is a senior team player and we have very important qualifiers coming up.

ASN: Before qualifying, you mentioned Nick Taitague was not released. How did he do in the December camp and do you believe he can and is ready to help this team in South Korea?

RAMOS: Nick did really well and there is a possibility of having him in but the World Cup roster is much more competitive and will be more difficult. Haji Wright is in consideration as well. He is starting to play better.

ASN: Finally, how confident and optimistic are you for the World Cup? Do you believe this team is capable of making a deep run like in 2015?

RAMOS: I am confident every time I coach. We went to qualifying with the goal of being champions, although no one had done it, and we will go to the U-20 World Cup with the same goal. You always have to believe in the team—from the coaches to the administrators to the equipment people. Everyone has to believe. Then we work as hard as we can to do our best one game at a time.