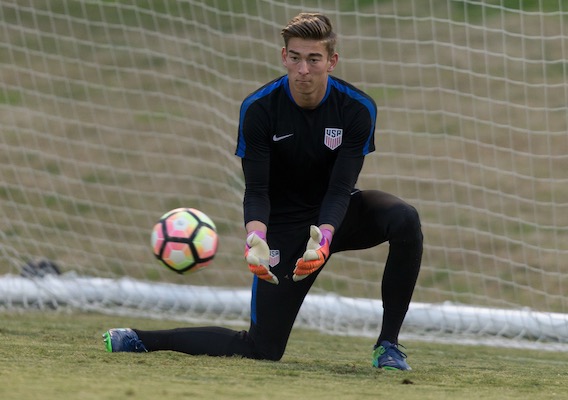 The U.S. under-20 men's national team coach selected 24 players to a February training camp that will culminate with the announcement of the World Cup qualification rosters. Brian Sciaretta offers his take.
BY Brian Sciaretta Posted
February 02, 2017
5:00 PM

ON TUESDAY Tab Ramos announced the roster for his final U.S. under-20 camp before the start of World Cup qualifying. All told, 24 players will assemble in Orlando, Fla., and the camp will conclude with Ramos naming his team for qualifying.

Competition for roster spaces should be intense and this camp will be the final opportunity for some players to make their case. The World Cup qualifying roster will consist of only 20 players (including two goalkeepers) and players from outside this roster, mostly those based in Europe, will still be considered.

While MLS has always been extremely cooperative in terms of releasing players for the U-20 World Cup qualifying tournament, European teams are typically reluctant to release first-team players. Unlike senior national team games, club teams are never required to release players for youth national team involvement.

To get players released from European teams for U-20 World Cup qualifying, typically it requires a bit of diplomacy from Ramos. Christian Pulisic will not be there, but no other American U-20 player is consistently seeing first-team minutes in Europe—although Tottenham’s Cameron Carter-Vickers and Fiorentina’s Joshua Perez are occasionally making the first-team bench for their respective clubs. Here is the full roster.

The above roster is similar to January's U-20 camp squad, with a few important differences.

First, Miles Robinson was dropped. The second overall pick in the 2017 MLS Draft was part of a very competitive log-jam in central defense that was six deep (Robinson, Trusty, Glad, Redding, Palmer-Brown, Carter-Vickers). All have impressive resumes but Ramos needed to start thinning the herd and Robinson has the least professional experience of the bunch.

Second, Marcello Borges has been a regular at left back for the U-20 team but the University of Michigan product is not on this roster. Instead, former U-17 standout John Nelson is in his place. That could be a strong indication as to how this position is shaping up in qualifying. Unsurprisingly, the left back position is once again a weakness on a U.S. youth national team.

This roster also delivers tough news for Cameron Lindley (eligible as a Chicago Fire homegrown) and Jackson Yueill (taken by San Jose Earthquakes with the sixth overall pick in the 2017 MLS Superdraft). Both players were part of the team early in the cycle but after being overpassed the past two camps, it looks like Ramos has moved on.

Not much has changed regarding the European-based players in the pool. Marlon Fossey is not involved in this camp although his regular involvement thus far in the cycle likely means he will be there for World Cup qualifying.

Gedion Zelalem’s loan to VVV-Venlo potentially changes his availability although the second-tier Dutch club is cruising toward promotion with its existing players and coaches are typically reluctant to mess with a winning equation. Would they release him? Does Zelalem even want to participate with the U-20 team again or he would prefer to focus on getting his club career off the ground?

Nicholas Taitague is perhaps the best bet. He is set to join Schalke this month after turning 18 but his release could be granted as the U-20 team would offer more meaningful games.

Last U-20 cycle was good for goalkeepers as Ethan Horvath and Zach Steffen were both top-notch for this level. This year, it is less clear how good the depth is at the position and who exactly is the No. 1 option for qualifying.

J.T. Marchinkowski and Jonathan Klinsmann are the top two options with Justin Vom Steeg in Germany also potentially in the mix. For the first half of the cycle Klinsmann looked to be in contention but Marchinkowski began to see more minutes. To his credit, even with U.S. Soccer’s firing of his father, the younger Klinsmann has continued to fight hard for his spot.

After speaking with numerous people surrounding the team, here is an updated projected World Cup qualifying roster as things are always changing.