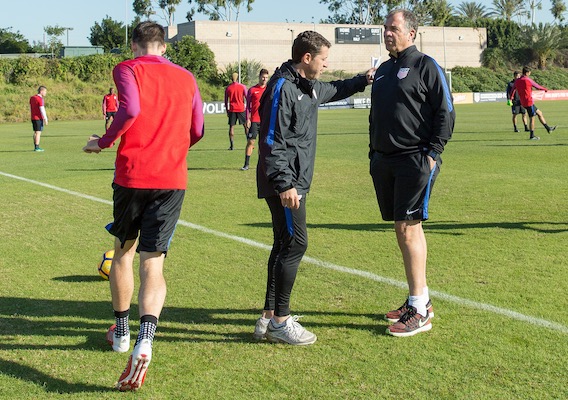 Ramos Faces Big Decisions Ahead of U-20 World Cup

With as many as 50 players still in consideration for his under-20 World Cup roster, Tab Ramos assembled 25 players for a training camp in London—and he has lots of choices to make in the weeks ahead.

TAB RAMOS NAMED a 25-player roster for his first U-20 camp following a successful CONCACAF Championship tournament in which the team not only qualified for the World Cup but also won the regional title for the first time in its history.

The under-20 World Cup begins on May 20 in South Korea and there is little time remaining for Ramos to decide upon his final team. The upcoming camp will take place in London and Ramos will use the opportunity to scout some European-based players.

“All players coming in to this camp have the potential to make our U-20 World Cup final squad, Ramos said. “I am sure that there will be a few players who will be selected for the U-20 World Cup based on their performance at this camp.”

Here is the camp roster.

While the U-20s won the CONCACAF championship, it was far from a smooth tournament. Goal scoring was a serious issue as the forwards, Emmanuel Sabbi and Jeremy Ebobisse, failed to impress.

The team’s passing in the final third was also lacking. The backline and the defensive midfielders, however, were first-rate and carried the U.S. to victory.

It is hard to believe Ramos when he says any of these players called in for the London camp could play their way onto the World Cup team. There are simply too many good players not on this roster. In total, 14 players from the qualifying team are not involved in this camp.

But clearly the players to watch from this team are the forwards. Many of them seem to be long shots— although based on how the forwards struggled in qualifying, Ramos needs to consider all options. Sebastien Des Pres plays for the youth program at Blackpool, a League Two club, and Stephen Payne is similarly far down the youth levels at Estoril in Portugal. Lagos Kunga from Atlanta United is a player worth monitoring in London but this is his first call-up to the team.

Should the forwards at this camp fall short, Ramos will have to roll the dice with the qualifying forwards or go with players who have not spent much, or any, time with the team this cycle. In March Ramos told American Soccer Now that Schalke’s Haji Wright is playing better and is back into consideration but other options could include Isaiah Young at Werder Bremen, McKinze Gaines from Wolfsburg, and Vitesse’s Kai Koreniuk, who was called up to this camp but was not released by his club.

Mukwelle Akale also joins the team after an up-and-down cycle. His club, Villarreal, has frequently denied his release to participate in U.S. U-20 camps, making it hard for him to gain traction with Ramos’ team. In the beginning of the cycle, Ramos listed Akale as one of the team’s top players. While he has played well at times, it now appears that he has fallen behind others.

Keaton Parks is another player to keep an eye on in this camp. While he is listed as a defender, he is a central midfielder. Parks played regular professional minutes earlier in the season with Varzim in Portugal’s second tier but a messy transfer attempt to Benfica B was never finalized and it caused an ugly contractual dispute with Varzim. As a result Parks has not played in the past few months. He is talented but there is a question as to his fitness and sharpness heading into camp.

Finally, Marcello Borges has been the team’s left back throughout most of this cycle but an injury forced the University of Michigan product off the team for qualifying. His injury created opportunities for Danny Acosta, who played the position in his absence, and Marco Farfan, who is now starting for the Portland Timbers and earning favorable reviews. The pressure is on as Borges attempts to reclaim his spot.

The player pool as it stands

If he has not done so already, Ramos will have to trim his player pool down to 35 soon per U-20 World Cup rules. Then, in May, he will have to name his final 21-player team.

Ramos has five players based in Europe who were not part of either team and are likely still in the mix: Nick Taitague, Haji Wright, Weston McKennie, Gedion Zelalem, and Cameron Carter-Vickers. It is highly unlikely that Christian Pulisic, 18, will play in the U-20 World Cup.

On top of that, there are two players in MLS who should still be in the player pool: Derrick Jones and Marco Farfan.

Other possible names to consider based on multiple call-ups this cycle are Manchester United Matthew Olusunde, Seattle’s Victor Mansaray, and Atlanta’s Brandon Vasquez.

All told, roughly 50 players are in the mix for those 21 spots. So Ramos has a lot of trimming to do just to get his squad down to 35—assuming the player pool is as open as he says it is.