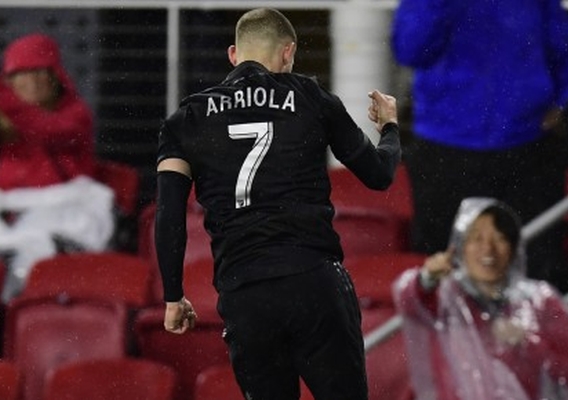 The 11th Week of MLS is complete and it was very different. The East was better than the West this week, good teams were bad, bad teams were good. ASN's Brian Sciaretta is here to discuss the nonsensical.
BY Brian Sciaretta Posted
May 13, 2019
7:00 PM
WEEK 11 of the MLS season is now complete and it was certainly one that tested old assumptions of who is good, who is bad, which is the stronger conference, and which players are for real.

Towards the end of April, the Galaxy were surging, the Red Bulls were struggling, the Revolution were taking, Atlanta looked like a mismatch with Frank de Boer, Pity Martinez was off to a poor start, the Eastern Conference could not compete with the Western Conference, and Philadelphia looked decent but not great.

Right now, it’s a different story. There were are lot of things happening that tested assumptions


It rarely happens, but the best two goals of the weekend were scored by United States internationals – and both were game winners in 1-0 results.

Paul Arriola’s strike against Sporting Kansas City was simply gorgeous – both with his control and his finish.


First-rate strike from #USMNT winger Paul Arriola to give DCU a 1-0 lead on SKC. https://t.co/tMaGtW3NZc

For the second straight week in a row, Cristian Roldan was a difference maker for Seattle via a stunning goal. This one from distance off a volley.


Second game in a row where Cristian Roldan has hit a first-rate goalazzo. This one was better than last week, IMO. pic.twitter.com/R2pYKf8f2X

Figuring out the Red Bulls


After a very ugly 2-1 loss midweek to Montreal, Red Bulls manager Chris Armas started almost an entirely different starting lineup against FC Dallas. The result was an impressive 3-1 win on the road against a Western Conference opponent.

The players played like they had a chip on the shoulder. Cristian Casseras scored the opening goal and reminded many why he was expected to help fill the void left by Tyler Adams leaving. Brian White scored and Sean Nealis got the credit of another goal after barely deflecting a Michael Murillo shot.

Andres Ivan, in particular, was outstanding throughout the game in his best outing for the Red Bulls.


MATCH RECAP, pres. by @providentbank: Red Bulls Round Up Three Points in Texas

The Red Bulls have actually won three out of four but remain a team that this still very difficult to figure out. What is good is that when a team of backups can win on the road against a good opponent, the “starters” need to feel the pressure to perform.

There is a good team to be had among this group of players but Armas doesn’t have much wiggle room to figure it out.


Over the weekend it became apparent that the Philadelphia Union are not just a team that is off to a strong start. It is a well-balanced team that has the potential to be the best team in the Eastern Conference.

On Saturday, the team traveled north to Canada to take on Toronto and came away with all three point after a 2-1 win. With the three points it is first place – ahead of DC United by goal differential. It came into Toronto with a solid game plan to limit Andres Pozuelo’s opportunities (which it did, from the run of play at least) and make the most of its opportunities.

With Marco Fabian back and Jamiro Monteiro continuing to improve, the Union’s midfield is pretty organized. In the weeks ahead, Jim Curtain will need to juggle how to continue to integrate Brenden Aaronson into the rotation (Aaronson returned to the field as a second half substitute after missing a week due to a hip injury). After the U-20 World Cup, Mark McKenzie should boost the backline and the eventual return of Andre Blake will help the goalkeeping situation. So there is plenty of room to grow.


Two things became clear in the LA Galaxy’s 2-0 loss at home to New York City. The first is that Galaxy boss Guillermo Barros Schelotto has work to do. The second is that New York City FC is improving steadily in the early parts of the season.

First, it was great to see Julian Araujo back in the Galaxy starting lineup. I know that many U.S. youth national team fans were upset to see him not on the U-20 World Cup roster but if he can start for the Galaxy, he will have plenty of more opportunities to grow as he would unlikely be a starter for the U.S. team as Sergino Dest is the unquestioned starting right back.

But the 3-5-2 was not a good formation for the Galaxy and Schelotto needs to bag it. The Galaxy fell behind 2-0 and only began to play like themselves in a 4-4-2.

But Dome Torrent has a good thing going right now and NYCFC has four wins and a draw in its last five. Things in this league can change quickly but this is easily the best the team has looked under Torrent.

Brazilian forward Herber just makes the team’s attack flow so much better there is no question City can push the teams at the top of the Eastern Conference table if it plays like this.

Also, James Sands made another statement after getting cut from the U.S. U-20 team.

After six weeks of looking lost, Atlanta is back on track and Frank de Boer has found an approach that is clearly working. Pity Martinez is finally looking happy and ready to lead this team in the manner of Miguel Almiron. He has that level of talent, but finding his rhythm has taken time.

His goal in the 14th minute was all Atlanta needed or would get to send Orlando City packing. The 1-0 result was fair but Atlanta could still do much better than win by the slimmest of margins against what is still one of the worst teams in the league. But despite the narrow result, Atlanta’s players looked happy and the buzz was back in Mercedes Benz Stadium.

Last year Orlando had the worst defense in the history of MLS. This year, when its defense holds together, its offense lets it down. Dom Dwyer, meanwhile, has struggled with just three goals in 678 minutes. A rate he will need to improve upon in Orland wants to push towards midtable.

A new era for the Revs?


The New England Revolution responded to the sacking of manager Brad Friedel with a inspiring 3-1 win over a surprisingly decent San Jose Earthquakes team on Saturday. That isn’t terribly surprising, despite the lopsided recent defeats the Revs have suffered. Sometimes teams respond positively to a big shakeup but will quickly return to normal if the talent or vision aren’t there.

On Monday, the team continued its shakeup when long-time General Manager Mike Burns was also fired. This shouldn’t have been too surprising as the press release for Friedel’s firing was unusual in that it did not contain any quotes from Burns or any other front office official.

ESPN broadcaster and former Revolution forward Taylor Twellman said on Monday that the expects Bruce Arena to take either the GM job, head coaching job or both for the Revolution.

That would certainly get people’s attention. Despite a poor stint as the U.S. national team manager to replace Jurgen Klinsmann during qualifying, Arena has actually been effective when taking over troubled teams – when given enough time to implement his vision. He did so his first time with the national team and he took over the struggling Galaxy a decade ago.

MLS is changing every year and it will be interesting to see how Arena handles the current environment.

One thing is for sure, the Revs are in a dark place. No plans for a new stadium, a roster that lacks talent, and a fanbase that is depressed and tuned out. The Revs are relic of the MLS v. 1. The problem is that he won’t have anything close to the talent (relative to the league) that DC United had and there will be no David Beckham and Landon Donovan there to help him out in the way they did for the Galaxy. He also won’t have a golden generation of talent like Donovan, John O’Brien, DaMarcus Beasley, and Eddie Pope like he did on the national team.

It’s tough to turn around a bad MLS team these days. The draft isn’t want it used to be and teams that are successful need to spend wisely on players and have a strong academy to sign homegrown talent. It’ll be a very different challenge and who knows what the budget will be under Bob Kraft.