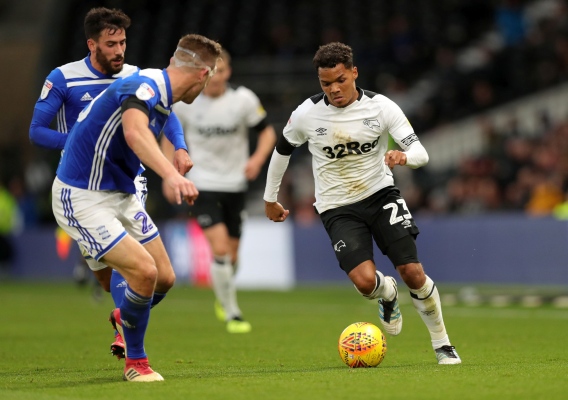 Americans abroad have struggles a lot recently but a different group of players is seeking to change that. Duane Holmes, Romain Gall, and Jann George have been showing positive signs recently and all three turned heads this weekend.
BY Brian Sciaretta Posted
November 05, 2018
4:00 AM
AFTER TWO POOR weekends for Americans abroad, the past three days were actually much better for Americans abroad. To make things interesting, the success didn’t come from the usual faces. Instead, it came from those still trying to make a statement on the professional level.

Typically, a good weekend for Americans abroad involves impressive outings from Christian Pulisic, Weston McKennie, along with some sort of combination of Jonathan Amon or Matt Miazga. Instead, none of those players stood out.

Pulisic only played the final 12 minutes for Dortmund in a 1-0 win over John Brooks and Wolfsburg. McKennie came on for just the final few minutes of Schalke’s 3-1 win over Hannover. Miazga still finds himself in a tough situation at Nantes – not even making the 18 while his club keeps winning. Amon started for Nordsjaelland but came off at halftime with FCN trailing Aab 1-0. It would finish as a draw.

Don’t be mistaken, there are still a lot of big concerns for Americans abroad, in addition to what is listed above.

Emmanuel Sabbi hasn’t scored for Hobro in nearly a two months. Alfredo Morales and Fortuna Dusseldorf are getting smoke nearly every week in the Bundesliga. Bobby Wood finds him in yet another relegation fight, this time with Hannover. Kenny Saief did not get off the bench for Anderlecht this weekend.

Ethan Horvath earned another start for Club Brugge but shared blame for the goal in a 1-1 draw with Genk. Andrija Novakovich remains hurt and missed Fortuna Sittard’s 3-0 win over PEC Zwolle.

Antonee Robinson started again for Wigan Athletic in the Championship but after its 2-1 loss to Leeds United on Sunday, it has now lost four out of its list five (and won just once in seven games).

Despite all of that, there were some positive stories to report from Europe and it mostly came from players outside of the U.S. national team picture. 4


Georgia-born attacking midfielder Duane Holmes very much wants to play for the United States national team. Back in 2013, he had already made his first team debut for Huddersfield but traveled at his own cost up to Scotland to watch the U.S. team play at Hampden. Growing up in England put him outside of the spotlight for many American fans but a breakthrough with Derby County could change all of that.

Two days before his 24th birthday, Holmes earned his first league start for Derby County. He joined the club in August from League One’s Scunthorpe after the season had already begun. Over the past few months Holmes has been playing most for the reserves and off the bench for the first team.

On Saturday, Derby manager Frank Lampard gave Holmes his first Championship start for the club against Birmingham City. Holmes more than delivered with a commanding performance in the midfield where he was subbed out in the second minute of stoppage time to a standing ovation from Pride Park crowd. He was also named Man of the Match in a 3-1 win which sent Derby into third place.


For players aiming for a breakthrough, seizing opportunities like this is huge and Holmes certainly made the most of his opportunity. If he keeps it up, perhaps a U.S. national team call-up awaits in 2019.


Jann George was born in Germany and Romain Gall was born in Paris but became a U.S. citizen during his teenage years. George received one call-up to a U.S. U-23 camp in 2011 but never made the Olympic qualifying team. Gall played for the U.S. U-20 team in World Cup qualifying in 2015 but was cut from the U-20 World Cup team that year.

Both players, however, are scoring very impressive goals this year – George for Jahn Regensburg in the 2.Bundesliga and Gall for Malmo in the Swedish Allsvenskan.

Here is George’s fourth goal of the year on Sunday in a 1-1 draw with Union Berlin.


In the 2.Bundesliga today, German-American Jann George (1 U.S U-23 callup in 2011) with an absolutely ridiculous goalazzo today for Jahn Regensburg. His 4th goal of the year. Watch this pic.twitter.com/4Tk0mkqBd1

Here is Romain Gall’s 14th goal of 2018 across all competitions in Sweden. Gall remains tough to figure out. He doesn’t always start for Malmo since joining over the summer but whenever he does, he makes a big impact.


If ever there was a player who needed a strong performance it was Erik Palmer-Brown who has been an unused substitute for most of the past month at NAC Breda – where he plays on loan from Manchester City.

Due to an injury, Palmer-Brown, 21, got the start for NAC Breda on Saturday against Heracles. The Kanas-born central defender went a full 90 in an important 2-1 win and was not at fault for the Heracles goal. With the win, NAC Breda moved out of last place in the Eredivisie.

This was a performance Palmer-Brown needed to have.


Newcastle United has been off to a poor start this season in the Premier League but DeAndre Yedlin has not been among the team’s many problems. Still, the club desperately needed a win this weekend at home against Watford.

Yedlin got the start and went a full 90 in a 1-0 win. The clean sheet victory not only pulled Newcastle out of last place, but also the relegation zone altogether.

Yedlin completed over 78% of his passes but was very good defensively on the right side – winning tackles, interceptions, and forcing turnovers.

It remains to be seen what happens with Jesse Marsch after this season at RB Leipzig but he is an assistant coach this year with a lot of power. Either way, he is tasting success and Leipzig’s 3-0 win over Hertha moved the club into fourth place.


Soto pushing up at Hannover?


In the youth levels, it seems like only a matter of time before Josh Sargent gets a chance with the first team at Werder Bremen. The winter break seems like the most likely scenario.

But what will happen with Sebastian Soto? The Real Salt Lake product is a goal scoring machine for Hannover’s U-19 team. He now has nine goals in his last 10 games, to go along with three assists. If you don’t consider penalties, Soto is the leading scorer of the northern U-19 league in Germany.

It will be interesting to see if Soto joins the U-20 team at all during qualifying if the U.S. team advances out of the first stage.

Joel Sonora, 22, is quietly trying to push forward with Talleres in Argentina’s top flight. Growing up in Argentina, Sonora tried to make the move to Stuttgart but returned back to Argentina after his stint in Germany did not work out.

This year, he has begun to make regular appearances for Talleres – mostly off the bench. On Saturday, he came on in the 68th minute to help preserve a 1-0 road win over San Lorenzo. At his age, he needs regular minutes. This year he made his professional debut.