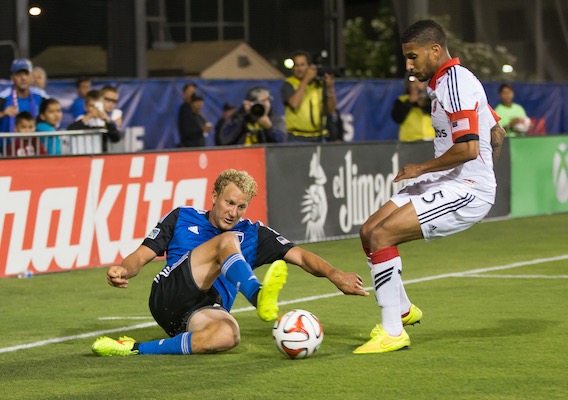 The former San Jose Earthquakes striker has been away from the game for two years due to injuries but recently resurfaced in Japan, where he has signed on with a team in that country's fourth tier.
BY Brian Sciaretta Posted
February 07, 2017
5:00 PM

ASK ANY GROUP OF American soccer fan what they think of Steven Lenhart and you arebound to get a huge range of responses. Some love him for his intensity while others hate him for his chippy style of play. Only a scant minority are neutral on Lenhart even after he's been away from the game for nearly two years due to injuries.

To supporters of the San Jose Earthquakes, he was a part of “Goonies” team in 2012 that won the Supporters Shield—a squad that typically played better than the sum its parts and made a habit of thrilling comebacks and late winners. On May 23 that year, that Earthquakes scored three times in the final 18 minutes to defeat the Los Angeles Galaxy 3-2. Lenhart said afterward that “Goonies never die," which became a rallying cry for the team.

To many others, Lenhart was seen as maybe the biggest villain in the history of the league. There have been numerous articles labeling him a dirty player, a bad boy, or someone who just gets under the skin of opponents.

In person, he is the embodiment of a free spirit. And now that free spirit has taken Lenhart across the Pacific Ocean to Japan where he will attempt to revive his career with FC Imabari of the fourth tier in Japan.

The news of his signing came as a surprise to nearly everyone—many who were closest to Lenhart didn’t even realize he had left for Japan in mid-January.

“It was a surprise to myself,” Lenhart told American Soccer Now. “I just packed my bags, found a home for my dog, and brought a couple pairs of cleats, and came to Japan. I didn't really have a plan—no plan at all actually.

"I didn't have a team. I had two friends who are Japanese and they are kind of connected in the soccer world, but not really. They sent a video of me out to a couple of teams and this was the only team that said, 'He could come in and train with us.' I trained one day and it's just kind of been unfolding from there.

“My dog was the only thing that was holding me back for a bit."

The decision to head to Japan on a whim originated in December 2015 when Lenhart made his first trip to the country. At the time his knee was still a mess and he was contemplating retirement. His friend Alan Gordon had recently put him in touch with a Japanese doctor who has practices in both Japan and Los Angeles.

Lenhart, 30, made a trip to Japan as part of his rehab and according to Lenhart he “completely revitalized my body.” After a second trip to Japan in 2016, Lenhart is now training on turf.

“I've had to find my own care to get healthy,” Lenhart recalled. “I had a bunch of surgeries and nothing was working. Now I am healthy. I am training every day on turf. I have to build a bit of my foundation back because it's been two years since I've played but I am really, really strong now.”

After only a brief trial at FC Imabari, Lenhart signed a contract; his press conference was televised. The team is based on the southern island Shikoku and the concept of having an American player is a stunning thought to locals. English is a rarity in this area of Japan—even on the team. The only way for Lenhart to communicate with officials and teammates is to use an interpreter who can translate Japanese into his second language of Spanish.

Since his arrival, Lenhart is frequently stopped on the street by people who are eager to say hello. Virtually no one knows about his controversial history in Major League Soccer. Sometimes when he is in a café, people buy him dinner because they “just want to hang out.”

FC Imabari is in the fourth tier but it is an ambitious club. The team’s president, Takeshi Okada, is a nationally known figure who served as Japan’s national team coach for the 1998 and 2010 World Cups. His long-term goal is to lift Imabari to the top-tier J-League.

The short-term goal for Imabari, which is now in preseason ahead of its March 5 opener, is to earn promotion to the third tier. Signs are encouraging after a relatively easy defeat of a second tier team in a friendly.

And so far Lenhart is impressed.

“When you say the fourth tier of Japan, what pops into your mind?” Lenhart asks rhetorically. “What pops into my mind is the level is super-low, probably not getting paid much, people are amateurs with another job. The field is shit. So then if I go out there onto the field with that mindset, I am not going to be good enough. I can't just go out there thinking I've done it.

“This team is very exciting,” he continued. “Takeshi Okada, the president, is the guy who took Japan to the World Cup twice. In Japan, everybody knows him. He has this vision for the team and the city. He is pouring all this energy into the team. He cares about his players. He cares about playing good soccer. The people he has working for him, everybody is so kind. They want to build something but in the right way.

"They're intending to win the league this year but it is not just about moving up and being the best, it's doing it the right way. There is just a ton of care. It's really refreshing.”

But can Japanese soccer fans expect the same Steve Lenhart was both beloved and hated in MLS from 2008-2014?

When informed that his official bio on the MLS website refers to him as an “anti-hero”, Lenhart chuckles.

“Go back, go back. Official bio?” Lenhart says in amusement. “Who is official? I am officially the anti-hero in somebody's perspective, huh?”

After a brief pause to collect his thoughts, he addresses that well-known side of him.

“It's certainly a side of me that I have to embrace,” he said. “If I say no to it or I act like it's not there, then I think I am doing a disservice to myself. I have to embrace it. It's a part of me. But do I want to exist in being seen as fully that?

"No—because that is not fully who I am. But I think it's easy to see me as fully that and to have that as my identity. It's just a part of me, man.”

So will that part of him come out in Japan? Lenhart is also coy.

But the move to Japan was abour more than just soccer for Lenhart. Ever since his first visit to the nation, he was completely drawn to culture and now admits he would not mind settling down permanently in Japan.

Lenhart lives on a picturesque bayfront with mountains and hot springs nearby. He insists that he is “diving fully into it” in trying to immerse himself into the community and spending a lot of time trying to learn the language. Last week he met a kindergarten teacher and already has plans to work with the kids in the school—something that has always been of interest to him. He also plans on buying a paddleboard and maybe even a boat to go explore the nature around him.

As he finishes eating his Sunday lunch that consists of rice balls, nigiri sushi, and a banana, he answers a final question about his current state of mind

“I am loving it, man,” Lenhart said smiling. “Japan is absolutely amazing. Everything is interesting and exciting. There is so much to learn here, dude. Everything is new and different. I have just been interacting with a ton of Japanese people and exploring. Japan, for me, holds a beautiful part in life that I am just connected to. Generally speaking the way Japanese people go about their trade and what they pour their energy into, is something I am very drawn to.”

“I had a few opportunities in MLS but this is more interesting to me.”