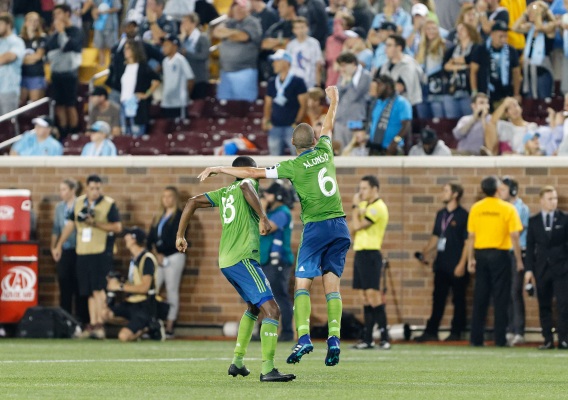 Kellyn Acosta is playing like he did when he was a top rising American player in 2016 while Gianluca Busio has been sharp since getting promoted to Kansas City's first team. The Red Bulls took advantage of Atlanta's slip while the Sounders are in another late season push
BY Brian Sciaretta Posted
August 07, 2018
3:00 AM
This past weekend was a fun one in Major League Soccer. Games went to the wire and young American players performed well. Meanwhile, the standings remain close in both conferences making it all tough to predict, as always.
Here is a breadown

5 games go to the wire


Saturday was probably the most entertaining day of the season, so far. Of the 10 games that were played, five games were decided by goals after the 87th minute.

2) Scott Sutter hit a 90th minute equalizer for Orlando in a 3-3 draw against New England.

3) Seattle Sounders equalized and found a winner both in second half stoppage time of a 2-1 victory over Minnesota. Will Bruin won it in the seventh minute of stoppage time.

5) Sam Nicholson hit a 90th minute winner to give Colorado a 2-1 victory over the LA Galaxy.

In addition to those five late goals, Sporting Kansas City found their winning goal in the 74th minute in a 1-0 win over Houston and Real Salt Lake downed Chicago 2-1 with the winner coming in the 75th.

The late outcomes made for fun viewing but it also shook up the standings. The biggest beneficiary was the New York Red Bulls which defeated LAFC 2-1 on Sunday. Both Atlanta and NYCFC dropped two points at the very end of their respective games. That allowed the Red Bulls to leapfrog NYCFC and move to within four points of Atlanta. The Red Bulls also have two games in hand on Atlanta and one game in hand on NYCFC.

The Red Bulls and new head coach Chris Armas, however, are set for a grueling test. While Atlanta has two games in hand, by the end of the month the Red Bulls will have played one more game than Atlanta. Much of this has to do with the rescheduling of games due to the Concacaf Champions League. The Red Bulls have been known for its depth due to a terrific USL pipeline but even this will be taxed heavily – and the club has lost two players for the year (Kyle Duncan and Florian Valot) due to ACL surgeries.

Similarly, the Seattle Sounders somehow are closing in on being within the playoffs positions after its fourth straight win. It is still five points behind sixth place Real Salt Lake but the Western Conference remains poor and anything is possible.

But the Sounders, once left for dead, are alive in large part because of its defense which has conceded just three goals in its last four games. The next four games will be much harder with Dallas, the Galaxy, Portland, and Sporting Kansas City standing in its way.


A change of scenery can do a lot for a player. One can recall U.S. international Fabian Johnson who was a standout with Germany’s U-21 national team and with 1860 Munich. He used that success to move to Wolfsburg which was an absolute disaster (where he played just 15 times, mostly as a substitute, over two seasons). He then moved to Hoffenheim and resumed his impressive career while also switching to the United States.

Sometimes a player just needs to move. Kellyn Acosta looks like a clean break from FC Dallas was absolutely needed. Just a year ago, Acosta was surging but he faded as Dallas struggled and then he needed a hernia surgery.

But with his move to Colorado, Acosta looks like he did when he was having his breakout season two years ago. On Saturday, he scored another for Colorado to make it two goals in two games.

What is great about Acosta is that he is playing so positively and his body language looks good. He is moving well and is taking the game to his opponents. Both his goals have come after nice runs.


Talk about a player that just needed a change of scenery. Kellyn Acosta looks like he’s having fun again. He’s playing well, body language is positive, and has 2 goals in his first 2 games. This one was nice against the Galaxy tonight #USMNT https://t.co/DHcU1PaRZC

If he continues this, it is easy to see him back in the fold with the new-look United States national team.


Gianluca Busio is one of the best players on the U.S. U-17 national team and he is part of a Sporting Kansas City team that is getting younger as the season goes along. First, Jaylin Lindsey, 18, was brought into the mix at left back – although he will probably shift to right back for both the U-20 team and Sporting Kansas City in the future.

Now Gianluca Busio, 16, is making headway into the team and on Saturday he not only played his second game for SKC but he also had this assist on the game’s only goal. The assist itself was very clever and difficult to execute.

Sporting Kansas City is investing in youth and is now giving minutes to key U.S. youth internationals. It is nice to see that rewarded with a win.


North Carolina’s Gianluca Busio, who turned 16 at the end of May, with the assist for Sporting Kansas City to go up 1-0 on Houston. Exciting moment for the U.S U-17 national team attacker #HOUvSKC https://t.co/MoGdkBPdXj