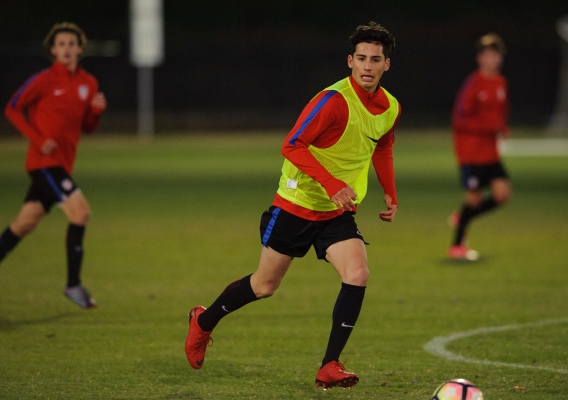 Sebastian Soto has had an tremendous season with the DA and recently had a big performance with the United States U-19s. Now he has set the stage for potentially big opportunities in the months ahead. Brian Sciaretta spoke with the Real Salt Lake prospect.
BY Brian Sciaretta Posted
May 23, 2018
11:00 AM
FOR UNITED STATES U-19 forward Sebastian Soto, there is a lot to think about these days. A year ago he was buried on the depth chart for the U-17 team and missed out on the World Cup team while playing for the academy team at Real Salt Lake.

But fortunes change quickly for teenage players and Soto’s stock has risen sharply over the past 12 months and there is no better indication than his scoring numbers.

This past year while playing for Real Salt Lake’s academy, Soto has been the leading scorer in U.S. Soccer’s Development Academy with 42 goals through 25 games – which is 13 goals better than the next best scorer.

Then last week, he won the Golden Boot at the 2018 Slovakia Cup while playing for the United States U-19 national team. His tournament-best five goals in four games helped the U.S. team win third place at the same tournament where Schalke discovered U.S. U-19 midfielder Weston McKennie in 2016.

Soto, 17, admits he was disappointed with having to accept a third place finish after a loss to the Czech Republic, but still believe it was an “amazing experience.”

“We learned more about the next level, the U-19 age group, in Europe,” Soto said. “You can tell the difference between the U-17 group and the U-19 group. Especially in Europe it is size. The guys are massive. When you look at the Czech Republic, they beat us because they're giants. But truthfully we knew we were the better players. If we learn how to play that game, we would have won.”


Big ups to @Sebastian9Soto for taking home the Golden Boot at the Slovakia Cup with five goals. pic.twitter.com/Fp8KAlzVID

For Soto, soccer runs in the family. The son of a Mexican mother and a Chilean father, his father played at the college level for Cal State Fullerton and his uncle, Eddie Soto, played for U.S. youth national teams and coached at many levels including as an assistant for UCLA and within the LA Galaxy academy.

For both club and country, it will be an interesting period for Soto. Internationally, his goal scoring output could mean a quick promotion to the U-20 team as World Cup qualifying approaches.

On the club level, it is also a very critical time as he is completing his senior year of high school. Now both college and professional options exist (As Soto points out: “It’s not overwhelming, but there is a lot on my plate”). For college, the choice would be the University of California which is coached by former U.S. national team defender Kevin Grimes.

“It’s an option,” Soto said. “One of the things that really impressed me with Berkley and Kevin Grimes is when I first met him, he immediately told me: ‘Sebastian, I know you want to go pro, and we would like you to go pro as well.’ And that was great to hear. Plus they have a scholarship for life when you can go for a year and then go off and play pro. He respects my ambition and that’s great.”

Then of course, there is Real Salt Lake where he has been the standout of the Development Academy. He is still not signed to a homegrown deal and there is a chance that as he continues to rise internationally at the youth levels, European or Mexican teams could swoop in.

About his future professional starting point, Soto is coy.

“It’s tough to say,” Soto explained. “RSL has given so much to me these past three years with everything they’ve done. I’ll always have my heart with RSL but in the end of the day it’s whatever makes the most sense for me and my career.”

There is no question that Real Salt Lake and Soto have developed quite a bond and at the core of that bond is academy director and former U.S. national team assistant Martin Vazquez.

Soto recalls that he made a big jump when he was on his U-12 team that he wanted to play for the best team in the San Diego area. He made the team in Chula Vista – which required an hour commute each way to practice. But when they played Real Salt Lake’s youth team, everything came together.

“The thing that changed my life is when we played RSL,” Soto recalled. “They scouted me and told me they wanted me to play right away. I was 15. It was tough and my parents sat me down and asked if this is what I really wanted to do. I said, yes.”

“When I first moved to the academy in Arizona, I was a little shrimp,” he added. “But Martin told me he wanted me to play the No. 9. I had always been a winger and sometimes as a striker. He was like, I can see it. From there, it took months – lifting every day and trying to prepare for that role with finishing drills. It was not easy. Then last season when I was with the U-16 team, I made a break through at a showcase in Florida where I had seven goals in three games. It all started there. I was a like, alright I got it down. From there I was scoring every game.”

Vazquez agrees that Soto has turned the corner and is impressing through his ability to score goals in a variety of ways to be dangerous.

“Ever since he came to us, he was already showing an ability to get in and round the goal and score,” Vazquez said. “One thing that he has is the desire and the hunger a striker must have. His technical ability he has with his back to the goal and the runs he makes, obviously over the past two and a half years, he keeps developing into a consistent striker. Right now in the DA, a lot of the goal he is scoring is from team play, a lot of goals are from him being opportunistic and a good finisher, and a lot of goals are from him being determined and having that composure…it’s good to see his growth up to now. Right now, Sebastian is doing very well for us. He’s in top form.”

It is still too early to say where his trajectory will take him but his success has come at typical age when good players tend to separate themselves from the pack. Of course, the parallels are similar with fellow Southern California native Jonathan Gonzalez who broke into the U-20 team late last cycle for qualifying but who ended up playing for Mexico in a high-profile black eye for U.S. Soccer. Soto is familiar with the situation and was quick to point out that “everyone’s path is different” and doesn’t expect a similar result should Mexico’s youth teams come calling.

“Ever since I was younger it was always a dream to wear the crest,” Soto said. “I've been told that maybe after this tournament or if I get to the U-20s that Mexico might be calling me but I've been talking to my grandparents from my mom's side that are fully Mexican and they even tell me: 'you're American. This is who you are.' The U.S. has given me everything.”