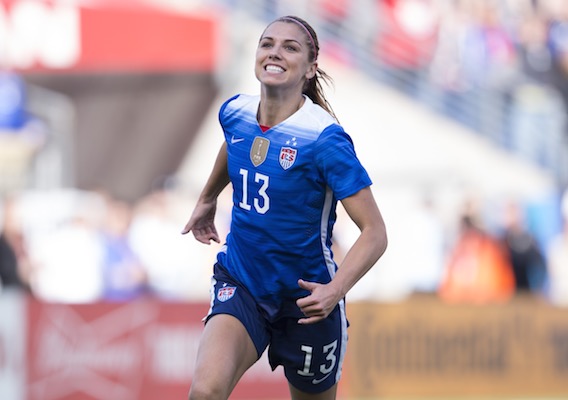 Smash and Grab: Yanks Steal a Win from France

ON SUNDAY AFTERNOON in Nashville, Tenn., the United States women’s national team stole a 1-0 victory over France in its second match of the SheBelieves Cup.

After struggling through a scoreless first half in which the French clearly dominated, the Americans made their best chance of the game count as Alex Morgan fired home in the 91st minute of play. Here are three thoughts from the contest.

Despite the final scoreline, France clearly had the better of the chances on Sunday—especially early in the game.

In the 11th minute Becky Sauerbrunn uncharacteristically gave the ball away as the U.S. pushed out of its own end. With Sauerbrunn unable to recover in time, center back partner Julie Johnston found herself trying to defend two French attackers in the ensuing counterattack. Winger Elodie Thomis drew Johnston out and centered the ball to teammate Eugenie Le Sommer in front of goal, but somehow Le Sommer—all alone—whiffed on the chance and the U.S. escaped.

Minutes later, the French would nearly score again with a flurry of chances.

Kelley O’Hara played a soft pass out of the back to begin the barrage. The U.S. lost possession and Morgan Brian fouled to stop the counter. On the ensuing free kick, Hope Solo managed to keep the ball out of the U.S. net with a fingertip save, but in a series of subsequent corners kicks, the French continued to put the Americans under even more pressure.

While Julie Johnston battled away the initial service on France’s second corner, the French put the ball back into the area and Carli Lloyd nearly scored an own goal as she lunged to clear the ball. Instead of going into the net, the ball ricocheted off the post and back into danger. Solo, who had dove on Lloyd’s misplayed clearance, quickly popped up and saved the second chance only to play it back out front of her goal again.

Le Sommer, only four minutes removed from her earlier miss, had a chance at redemption, but Sauerbrunn managed to pressure the shot as Le Sommer missed again, this time firing her close range shot over the crossbar.

For the remainer of the contest, the two sides battled back-and-forth with the French dictating play for most of the first 45 minutes and the Americans gaining ascendancy in the second half. The two sides remained in a scoreless draw until Morgan’s breakaway goal in stoppage-time secured the win for the U.S.

PLAYER OF THE GAME: MALLORY PUGH

Considering the fact that the Americans are only eight months removed from winning the World Cup, it seems hard to believe that a 17-year-old kid could be their best player right now. However, starting for the fifth game in a row, the young phenom created nearly every good chance the U.S. had against No. 3-ranked France.

Pugh’s blazing speed enabled her to latch onto through balls that her teammates played too far ahead for any other player, and her willingness to run at defenders helped her earn multiple corner kicks. In the 55th minute she put two successive passes into the box, but neither Lindsey Horan nor Tobin Heath could find a finish.

With 30 minutes to go, Pugh nearly broke the deadlock on two more occasions, almost finding Morgan in behind the defense and then breaking France’s defense down with a tremendous solo run.

It took the full length of the contest, but Pugh finally made the difference in the contest, assisting Morgan’s goal with a perfectly weighted through ball in stoppage time for the game-winning goal.

Despite the win, and the quality of the opponent, the U.S. offense struggled to create chances throughout the contest. Following similar matches—also against quality opponents in Canada and England—fans can't helpbut wonder if the dynamic between Carli Lloyd and Morgan in the U.S.’s 4-2-3-1 is putting the team’s talent to proper use.

In Jill Ellis’ defense, her 4-2-3-1 formation with Lloyd attacking finally unlocked the U.S. attack at last summer’s World Cup and led the Americans to victory. At the same time, that lineup seemed to provide more interchange between Lloyd and Morgan Brian (with now-retired Lauren Holiday holding), and allowed Lloyd to roam from box-to-box connecting the American attack.

Since the World Cup, Ellis has deployed Lloyd higher up the pitch, forcing to her play with her back to pressure and limiting her touches. Perhaps dropping Lloyd back into a No. 8 role would help the U.S. generate more offense.

If Ellis made that decision, it could be done in a number of different ways. The simplest change would be for Ellis to drop Lloyd deeper in the midfield and move Brian, Horan, or another player (Pugh and Christen Press would make interesting candidates) into the No. 10 role. Or the coach could play Brian and Lloyd side-by-side in a 4-1-4-1 with a designated holding midfielder behind them in a 4-1-4-1.

As it currently stands, Lloyd is not involved in the run of play enough and when Morgan gets the ball, she is stranded on an island. This is most evident when Morgan runs in behind, only to look up and see her nearest teammate 30 yards away and with no viable options to attack.

While the U.S. did come out with the win on Sunday, Ellis can’t be happy with the lack of chances her offense is creating right now.

The U.S. plays against Germany on Wednesday in the final game of the tournament (7:30pm ET, ESPN3).