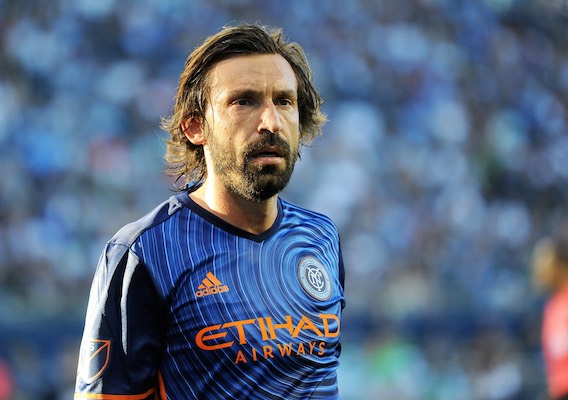 From the opening whistle Sporting had energy and enthusiasm while New York looked tired and lethargic, and maybe too content, after s successful four-game run through a condensed portion of its schedule.

While much of the attention in the Western Conference is focused around the talent of FC Dallas and the L.A. Galaxy and also the surprising push of Colorado, Sporting Kansas City is an old-guard team that is still a force in the league.

There's a lot to like about Sporting Kansas City too. The team can play attractive football like it showed against New York. Unlike New York City, however, it can also deliver on infrastructure promises. Already boasting one of the best stadiums in the league, it recently broke ground on a $62 million soccer training complex.

One thing both teams do have in common, however, is that both managers are willing to bench a U.S. international. Mix Diskerud is MIA for New York City while Matt Besler is not starting for Kansas City despite still being in the national team picture.

NYCFC had a bad game. But all good things come to an end and a slip-up isn’t unforgiveable. One concern is that after the old designated player trio decided to show up and play well over the past month, how will they hold up heading into the playoffs? Is the team so reliant on older players that it will fade in the playoffs due to the wear and tear of the long regular season?

The Philadelphia Union are among the most surprising teams in the first half of the season. On Saturday the club received some nice accolades as rookie right back Keegan Rosenberry and goalkeeper Andre Blake were named by the fans as starters in the All-Star game.

The Union snapped a two-game losing streak with a very impressive 3-0 win over D.C. United on Saturday. The first two goals came off penalties but both were deserved and the Union clearly controlled the game.

Dutch attacker Roland Alberg has been a huge part of the team’s success and is on an outstanding run of form. In his 645 minutes this season he has six goals and one assist. He is consistently dangerous and was a key pickup for Union Sporting Director Earnie Stewart.

How bad are things for the Columbus Crew? Very bad.

Of course teams like Chicago and Houston are worse, but Columbus is incredibly disappointing. Gregg Berhalter’s team is playing so far below the sum of its parts that it is going to take a remarkable turnaround to sneak into the playoffs. If Saturday’s 3-1 loss to New England is any indication, that turnaround is not happening anytime soon.

But we have a great coach and great players. Just not clicking. Shows the close margin for error in mls. Not far removed from playing 4 Cup.

I only see one way to handle tough times, and that's to remain optimistic. Calling this the low point of season. #CrewSC

Gyasi Zardes is one of the most enigmatic American players of his generation.

His critics are correct: He lacks some key technical skills that often hurt the Los Angeles Galaxy and the U.S. men's national team. His first touch has let him down on multiple occasions.

But his supporters are also correct: He makes game-changing plays on a regular basis. Unlike Chris Wondolowski, he can score and/or deliver an assist in important games against quality opposition. Often these big plays demonstrate tremendous skill. This was reemphasized during Copa America Centenaruo in the wins over Ecuador and Paraguay.

Zardes is such a rare mixture of both good and bad that all can be seen multiple times within the same game. Consider his assist to Robbie Keane in Saturday’s 1-0 win over Seattle—a great run and tremendous assist on a game-changing moment

Zardes is what he is: frustratingly valuable.

If you missed the scoreless draw between Orlando and Houston on Friday, congrats. It was probably the worst game in MLS this year and it wouldn’t be surprising if it was the worst game in the league in several seasons.

It featured two teams with interim coaches, there was no direction, no cohesion, and nothing appealing on the field. It was painful to watch. The game could have been 400 minutes long and neither side would have come close to scoring—and not because of great defense or goalkeeping either.

What an absolute mess.