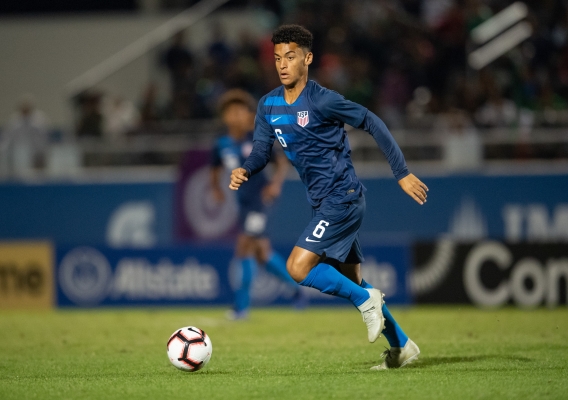 Servania striving for playoffs and Olympics following U-20 World Cup

FC Dallas is home or has been the home to some of the best young American players in the game right now. on the heels of a solid U-20 World Cup, Brandon Servania is now an anchor in the Dallas midfield and is building his case to be part of the U.S. U-23 Olympic qualifying team. ASN's Brian Sciaretta spoke with Servania about his big year and ambitious plans.
BY Brian Sciaretta Posted
July 11, 2019
10:00 AM
THE LAST 12 months have been an extremely busy and productive time for Brandon Servania and if everything goes according to plan, the next year could see the midfielder take his game to new heights with plenty of significant and meaningful opportunities on the horizon.

Last year, Servania, 20, was dealing on the roster for the USL’s Tulsa Roughnecks on loan from FC Dallas where he signed a homegrown deal at the start of 2018 after playing one season at Wake Forest. That fall, he trained with Bayern Munich for two weeks and returned to join the U.S. U-20 team for World Cup qualifying where he was named to the All-Tournament Team en-route to the team winning the U-20 CONCACAF title.

The beginning of the 2019 MLS season wasn’t great for Servania who wasn’t starting for FC Dallas – who had recently hired academy director, Luchi Gonzalez, as its head coach. Instead he was starting for the club’s USL League One club, North Texas SC. Despite that, U-20 head coach Tab Ramos named Servania to the World Cup team and it was there in Poland where Servania’s game began to take off.

“It was huge for me to get the opportunity to go to the U-20 World Cup,” Servania told ASN. “It helped with the confidence a little bit and being able to bring that same energy back to Dallas has been great. And then being able to get my first starts with the first team. Is it amazing and I’m just looking to keep it going and continue this.”

In the very first game of the World Cup, Servania scored the U.S. team’s only goal in a 2-1 loss to eventual champions Ukraine. In the third game against Qatar, Servania drew a penalty which teammate Alex Mendez failed to convert. Then in the round of 16, Servania went the distance in defensive midfield in a stunning 3-2 win over France – the pretournament favorites. It was in that game where Servania's defensive play sprung the break for the team's opening goal scored by Sebastian Soto.

Brandon Servania picks up his first goal of the FIFA U-20 World Cup and levels the score. pic.twitter.com/rdQicMCvvb

The U-20 World Cup, however, was not just a career highlight for Servania but rather a turning point. After the team’s 2-1 loss to Ecuador in the quarterfinals, Servania returned to Dallas and has been a starter following the sale of Carlos Gruezo. But Servania has not merely held his own, he has been among the team team’s best players – including in a 3-0 win over Toronto in his first league game back and most recently a 2-0 win over DC United.

“Now that he's getting more opportunities as Dallas, I think hopefully he'll prove to everybody the type of player he is because I really believe in him,” U.S. U-20 head coach Tab Ramos said. “I think Brandon has really everything. The technical ability, the physical abilities to be able to play the No. 8 or the No. 6 positions. He started in the No. 6 position against France and did really well. That is where I had him during qualifying and was on the all-tournament team. Brandon is just a great player all around. His distribution is excellent, he can win balls.”

“That is one of the things I had to convince him about and where he needs to improve on a little bit more - winning the ball back,” Ramos added. “At Wake Forest he played more of an advanced position where he was almost like a secondary striker or a No. 10-type position. When he came to the U-20s, I told him I was probably going to use him in a different role and when I put him at the No. 6, it wasn't a role he was familiar with. I felt the because he has such great technical ability, the ability to play a higher position, I think it normally becomes easier for those guys to become a No. 6 as long as they're willing to make that hard effort a couple of times a game where they have to track a guy down. He agreed that he could do it and I think he did a great job.”

Now looking forward, Servania has a lot on his plate. For one FC Dallas is in the thick of the Western Conference playoff race and sits in fifth place at the halfway point. Internationally, Servania could be one of the 2019 U-20 players who makes a quick transition to the U-23 team which will attempt to qualify for the 2020 Olympics next year.

For that U-23 team for qualifying, FC Dallas could provide a huge piece of the core due to it being the league’s most youth-oriented team. Along with Bayern Munich's Chris Richard and Schalke's Weston McKennie having played for the Dallas academy, three of the team’s current starting midfielders were on the U-20 World Cup team and are U-23 eligible in Servania, Edwin Cerrillo, and leading prospect Paxton Pomykal.

The youngster put @FCDallas into the lead over @NewMexicoUTD five minutes from the interval with a stunner from long range.

In addition, right back Reggie Cannon also had a strong Gold Cup with the full national team and is U-23 eligible. Then starting forward Jesus Ferreira, 18, is in the final stages of becoming eligible to play for the United States (of whom Servania adds: “if he would have had his citizenship in time for the U-20 World Cup, it would have been huge but unfortunately that wasn't the case. But I think whenever he gets that and he's able to play with the U.S., that would be huge for all of us.”)

FC Dallas is having a massive imprint right now on U.S. youth national team at every level right now and just about all of these players are able to contribute to the first team that not only plays its youth, but wins with them.

Servania points out that this youth project has been able to achieve results through the relationship that many of the players have with Gonzalez dating back to the academy. That relationship is strong both on and off the field and Servania is quick to note that Gonzalez helped him make the transition moving from his native Alabama to Dallas to join the academy at the U-15 age group.

But for all the players, Gonzalez’s approach has allowed the players to both develop chemistry with each other and have a firm understanding of what is expected of every role on the field in his system.

“All three of us in the midfield, we all actually went to Poland,” Servania said. “Having the chemistry with those guys has been great. We all came from the academy and went up to the first team. Hou can see the progression and I think that is just being comfortable and confident in each other has shown on the field.”

“I know what [Gonzalez] expects from me in terms of my performances and what I should bring to the game,” Servania continued. “A lot of us guys from the academy have the same relationship with him. We just try to implement our concepts every game and it has been working. I think obviously the playoff push is important to all of us. I think that we can accomplish it.”


Brandon Servania’s opening for for the U-20s was very nice. Important goal in World Cup qualifying to give the US a 1-0 lead over T&T. Now 2-0 pic.twitter.com/aWDo5raskv

On the international stage, it is very easy to see Servania making a case to be on the Olympic team where he could join several Dallas teammates. Of the U-23 eligible players, Servania is arguably the best domestic-based No. 6 and the second best overall behind Tyler Adams.

The pain of a quarterfinal exit at the U-20 World Cup was tough on him but for many, it only left them hungry to make a quick return to representing United States on an important stage.

“It definitely hurt,” Servania said. “We thought that we had a really good chance to bring the trophy home. We played every game and we could have won every game. We just weren't able to get the win [vs. Ukraine] but we had a lot of opportunities and they ended up being the champions. We beat France, which was one of the favorites. I think we proved that we were one of the best in the world. But we all have to move forward in the next step for us - just continuing to stay hungry and stay focused and the Olympics are coming up so I feel like a lot of us guys will get a chance with that team, if not the full national team. That is definitely all of our goals and I think the World Cup definitely helped all of us.”