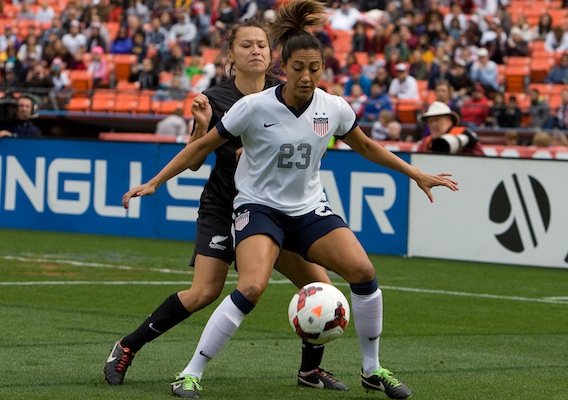 At first glance, many U.S. fans might be wondering why Rachel Buehler isn’t listed above. But fans of the player affectionately known as the “Buehldozer” shouldn’t worry—she is now going by her married name, Van Hollebeke, something she announced on Twitter earlier this week. Injuries influenced this squad: Goalkeeper Ashlyn Harris, who is expected to compete with Jill Loyden for the third goalkeeper spot on the U.S.’s World Cup roster, is still recovering from minor knee surgery. Alex Morgan is also still recovering from an ankle injury and Tobin Heath from a foot injury. Several healthy players—including some who are expected to compete for a World Cup roster spot—were left off the team without explanation. Meghan Klingenberg, who recently became an allocated player in the National Women’s Soccer League (meaning that the U.S. Soccer Federation is paying her league salary), did not make the cut. The same applies to midfielder Yael Averbuch. The U.S. federation only sponsors 26 American players in the NWSL and this represents a major commitment by the federation to the league. Both Klingenberg and Averbuch were brought home from European teams for the 2014 season, and their exclusion from the U.S. roster is a surprise. Averbuch’s omission amplifies Sermanni’s decision not to include Amber Brooks, who is also returning to the NWSL this year from Europe. Without Averbuch or Brooks on the team, the U.S. does not have a true No. 6 on the squad. That means either Sermanni is comfortable fielding two attacking central midfielders in Lloyd and Holiday, or that the upcoming friendlies will be used for some experimentation in the center of the U.S. midfield. Amy LePeilbet also failed to make the squad and is apparently still not fully recovered from her ACL surgery last January. Forwards Lindsey Horan and Sarah Hagen were not included, although neither is really a surprise. Horan, recently with the U-20 squad in CONCACAF World Cup qualifying, returned to Paris Saint-Germain before the qualifying tournament finished. Hagen, who was in the U.S.’s January camp, returned to Germany almost immediately after the camp ended. Kealia Ohai has still not been called into a senior U.S. camp, despite being a major part of the U.S.’s U-20 World Cup championship team and leading the University of North Carolina to a national championship in 2012. She was the No. 2 selection in the NWSL draft earlier this month.

A few names included on the roster qualify as surprises, led by UCLA product Sam Mewis. Mewis was part of the U.S. U-20 team that won the World Cup in 2012 and helped lead UCLA to the 2013 NCAA championship this past fall. This is Mewis’s first senior team call-up. She is the 45th different player Sermanni has called into the national side during his tenure. Julie Johnston received another call-up from Sermanni, but was listed on this roster as a midfielder. On previous rosters, Johnston was listed as a defender, the position she played when she captained the U.S. U-20 side to the World Cup championship in 2012 (she often played as a midfielder in college at Santa Clara). The listing of Johnston as a midfielder may help explain why Averbuch and Brooks were left off the roster, but it would be a shock if she has leapfrogged either on the U.S.’s depth chart. Stephanie Cox also received another call-up after only recently returning to the national team. Cox missed the 2012 Olympic roster, then most of the 2013 NWSL season after giving birth to her first child. Being chosen over both Klingenberg and LePeilbet (who was a regular starter in both the 2011 World Cup and 2012 Olympics) will raise a few eyebrows.

Back in the Saddle

Megan Rapinoe is back with the team after returning from France. Last week, in a move that caught many off guard, Rapinoe left Lyon midseason to return to the U.S. saying that it was better for her “overall happiness and wellness.” (Has she been consulting with Landon Donovan?) Kelley O’Hara appears to have finally recovered from the ankle injury that kept her out most of 2013. Her last start for the team was in April. Erika Tymrak and Morgan Brian both received call-ups. Neither were shocking, but both selections indicate that Sermanni is happy with the progress of these two attacking midfielders. With Rapinoe, Tobin Heath, and Heather O’Reilly in the mix, neither Tymrak nor Brian are likely to become feature players, but both are in the mix for a World Cup roster spot. Finally, Alex Morgan's lingering injury likely created an opportunity for Amy Rodriguez, who was a regular in 2011 but saw her playing time virtually eliminated with the emergence of Morgan and Sydney Leroux. What do you think of this roster? We'd love to hear your thoughts in the comments section below. John D. Halloran covers the U.S. women's national team for American Soccer Now. Follow him on Twitter.