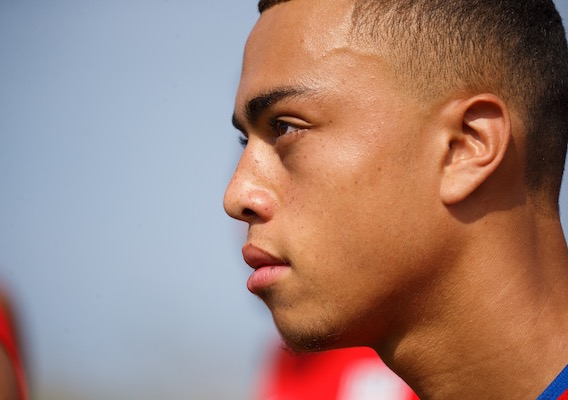 A dual-citizen who plays for Ajax's U-19 team, Dest has helped stabilize John Hackworth's backline at the U-17 World Cup in India—and he has made himself an integral part of this promising team.
BY Brian Sciaretta Posted
October 19, 2017
12:00 PM

IN A MASSIVELY DISAPPOINTING YEAR for American soccer, fans are finding promise in the impressive results from youth national teams. In 2017, the United States U-20 men's national team advanced to the quarterfinals of its World Cup and the U-17 men will face England on Saturday for a spot in the semifinals.

Expectations were high for the U-17 team before it arrived in India and so far the team has lived up to its billing. Star players like Josh Sargent, Andrew Carleton, Tim Weah, and Chris Durkin have lead the way. More importantly, new players have stepped into the spotlight and look like promising players who can help the program in the years ahead.

One such player is right back Sergino Dest, 16, who currently plays for Ajax’s U-19 team and is a product of the Dutch club’s famed academy. Just over a year ago Dest made his American debut with the U-17 team when John Hackworth gave the teen a shot.

Born in the Netherlands, Dest has a background similar to many dual-nationals in the U.S. program. His father, a New York City native, served in the U.S. military and met his mother while stationed in Holland. Dest grew up in Europe but U.S. Soccer noticed him as he progressed at Ajax.

Since his 2016 debut with the Stars and Stripes, Dest has impressed Hackworth and has emerged as a key starter for the U.S. U-17 team. The youngster has set his sights on the World Cup.

“Personally, I am feeling really good,” Dest told American Soccer Now from India. “This is the biggest tournament I have ever played in my entire life. You can't expect to do anything better at this age. We've done very well until now. We have to keep going.

"England is a tough opponent—they're very good physically. They have a lot of very good individual players. But I think if we play well collectively as a team and work hard, I think we can beat anyone."

Ahead of the tournament, many expected the U.S. would feature one of the best offenses in India. While that still remains the team’s strength, the American defense that has quietly exceeded expectations, posting three clean sheets in the team’s four games. Dest has played a big role in that impressive statistic.

Central defender James Sands has been a part of the team’s core since the beginning of the cycle and has come away impressed both by Dest’s ability to stabilize the backline and to quickly integrate into a squad full of strangers.

“That's probably one of the most difficult things—coming into a team where everyone is so close,” Sands said. “But he's done such a good job with it and it's showing in the games. He brings so much into the game. He can move forward and he can defend really well. Everyone feels he is part of the group now and that's all you can ask for.”

The Dutch federation has shown little interest in Dest despite him playing for the country’s most storied club. But Dest has definitely noticed the U.S. U-17 team, and believes that this generation of American players is of very high quality.

“This team is good,” Dest said emphatically. “When I was growing up in Holland, you would think the USA isn't that good. This team is just different. I think this team is similar to a European team.

“But to be honest, I expected it,” he added after pausing to collect his thoughts. “I watched the Nike Friendlies from 2015. I thought they were on the level of a great team. In Holland, we had some very good individual players but collectively, the U.S. was much better. We do it together. It is such a pleasure to be a part of this team in a World Cup.”

“My first time to America was in 2014 and I went to New York,” Dest recalled. “When I went to New York, my eyes went wide open. I've never seen anything so big. I visited my uncle. In Holland, things are pretty small. I loved it.

"I think New York is the best city.”

Dest acknowledged that while it is odd to hold dual citizenship from two countries that shockingly failed to reach the 2018 World Cup in Russia, he believes the success of the United States' U-17 and U-20 teams suggest better days ahead.

His experiences at the U-17 World Cup have not only strengthened his bond with the United States, they have also given him a new set of professional goals: “For me personally, after this World Cup I want to prepare myself in a year-and-a-half to be on the U-20 World Cup team,” Dest said. “I will do everything I can to be part of that.”