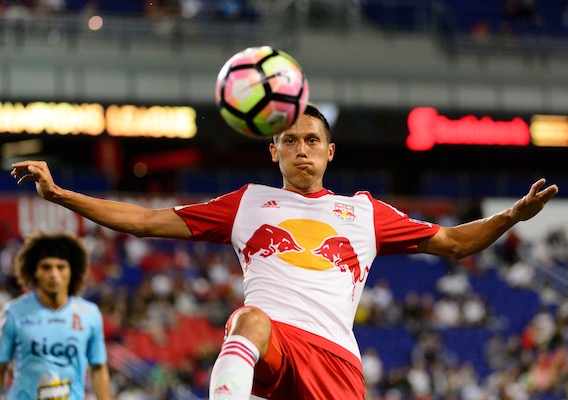 The New York Red Bulls infuriated its supporters by selling Dax McCarty to Chicago, but the transaction paves the way for 24-year-old Sean Davis, a promising midfielder who was buried on the bench.
BY Brian Sciaretta Posted
February 10, 2017
1:50 PM

THE NEW YORK RED BULLS' DECISION to sell captain Dax McCarty to the Chicago Fire was shocking to the team’s loyal group of supporters who have seen more disappointment than success over the club's two-decade lifespan.

The man set to fill the void left by McCarty understands this all too well. Sean Davis, a native of Long Branch, N.J., has been attending Red Bulls games since before he can even remember and his childhood memories include meeting Tab Ramos after one game and seeing Freddy Adu score his first goal in person. Davis' youth team once won a contest to play at Giants Stadium during halftime of a Metrostars game.

Now Davis, an understudy for the past two years, is in line to become the team’s starting central midfielder. Many outstanding players have played this position for the franchise, including Claudio Reyna, Tab Ramos, Michael Bradley, and even Roberto Donadoni.

In recent years, however, that position revolved around McCarty who helped carry the team to two Supporters Shields—the club's only trophies—and the No. 1 seed in the Eastern Conference each of the past two seasons.

Selling McCarty has brought the franchise plenty of grief—just ask Jesse Marsch—but one of the factors that opened the door is that Davis appears ready to claim the spot for his own.

“It does give me a lot of confidence trading away a guy like Dax knowing how much he meant to this team, this club, and the fan base,” Davis told American Soccer Now. “But at the same time I don’t feel nervous and I am not putting too much pressure on myself because I know the work I have put in during the offseason. Not only this offseason but over the past two years.

"I feel like I’ve done everything I can to prepare for this. I just want to play the style of play I want to play and be the player I’ve been working hard to become. If I pay too much attention to what the media is saying, it is only going to take away from this moment.”

Highly touted out of Duke University, Davis has looked sharp whenever given the opportunity to play. He joined the Red Bulls after signing a homegrown deal in December 2014 but was forced to play behind a midfield trio of Felipe Martins, Sacha Kljestan, and McCarty.

As a result, playing time was hard to find for Davis who likely would have started for just about any other MLS team. Last year McCarty suffered an injury that forced him out for more thana month and Davis got a long stretch of games and showed well—likely signalling to the front office he was ready to replace the captain. The unspoken reality might have set in that the club got the best years of McCarty and it did not want to waste the best years of Davis.

“He doesn’t have to carry that [leadership] burden,” Marsch said recently. “That will be more on the shoulders of guys like Sacha [Kljestan] and Luis [Robles] and Brad [Wright-Phillips]. What Sean has to do is continue to establish himself as a great player like he’s already done in his own way and on his own path. He doesn’t have to be Dax. He has to be true to himself."

Another Red Bull player who will be looking for increased playing time is United States U-20 midfielder Tyler Adams. He agreed that the opportunity is there and was impressed by what he saw from Davis last year
"For myself and Sean, it does open a big window for us," Adams said. "Sean got a lot of minutes last year and he played a big part when Dax was out. He's kind of proved himself that he can play a big role."

Davis, who just turned 24, is no longer considered a young player in the world of soccer but his situation reflects the reality that American players often get a late start to their professional careers. Davis admits it was tough, at times, waiting this long for his opportunity but he now feels fully prepared.

“If you’re happy with being on the bench, you’re in the wrong profession," Davis said. "I tried to be optimistic and I think that went a long way to helping me with my patience. It definitely was tough at times but at the same time I look back at the past two years and when you talk about the American soccer system, it was a pretty typical journey. I graduated from college which is something I agreed to do with my parents. By the end of it I was eager to get on the field. It was tough but the coaching staff did a good job talking with me and showing faith in me—telling me their vision.

“I also learned from those three midfielders in front of me—Kljestan, Felipe, and McCarty,” he added. “They really helped me. They’re arguably the three best midfielders in the league in their positions the past two seasons. I did get a string last year. At that moment I felt it came at the right time. Nothing felt rushed and nothing was too soon. I was ready and prepared. If I had to look back on everything, I am not sure how much I would have changed.

"I am happy with how things fell into place.”

The 2017 season should prove telling. Expectations are still very high for the Red Bulls organization which desperately wants to win its first MLS Cup. In addition, the team will be playing in the CONCACAF Champions League knockouts starting this month and will play in the group stages in the 2017-18 edition this fall. Combined with the U.S. Open Cup, it is a crowded schedule with a lot of important games to be played.

Over the winter, Davis worked hard with Kljestan and heading into this preseason he acknowledges that he feels more like a veteran than a younger player. The coaching staff has been impressed.

"He’s come in flying," Red Bulls assistant coach Chris Armas said. "He plays the way we want to play. With the ball, can join into the attack ... He just has good energy, high energy and the optimism that I think is important."

On February 22nd the Red Bulls will take on Vancouver in its first-ever knockout stage series in the Champions League and Davis is expected to be in central midfield for the contest. It will be quite a moment for a player who grew up idolizing this team.

“Now that I've been with the group for a few years and have experience under my belt, I feel a lot more comfortable as an emerging leader within this group,” Davis said. “I am not putting pressure on myself. I just want to get better each day in all areas. I am really happy with how things are going, not just on the field but with the support I am getting from the staff and the team.

"We are putting a really strong XI on the field every time we play.”