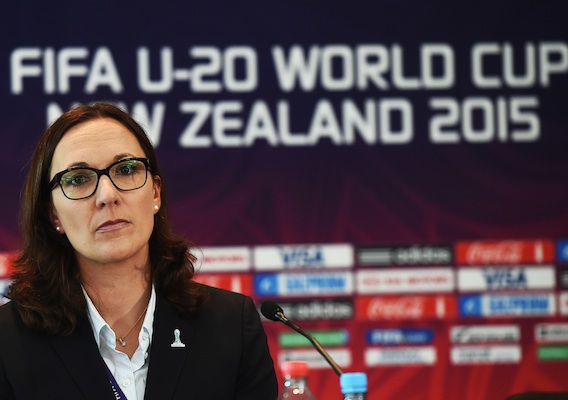 Tab Ramos' U.S. under-20 World Cup team will kick off against Myanmar late Friday night, and ASN's Josh Deaver did some digging to find out what the young Yanks will face in their group stage opener.
BY Josh Deaver Posted
May 28, 2015
4:50 PM

HAILING FROM the Asian Football Confederation (AFC), a mysterious footballing dimension seldom broadcast in this hemisphere, Myanmar is perhaps the most unlikely participant in the FIFA under-20 World Cup, which kicks off Friday in New Zealand.

Despite a competent recent history competing in the AFF (the AFC’s Southeast Asian sub-federation) including a 2005 Youth Championship, Myanmar has never competed at any level of World Cup competition. The “White Angels” haven’t even come particularly close.

Under the flags of both Burma and Myanmar—the nation changed its name in 1989—the team did not participate in World Cup qualifying from 1977-1998 and failed to qualify from 2000-2012. It's a far cry from the golden era of Burmese football, which saw youth teams capture seven AFC U-19 Championships during a decade-long run of dominance in the 1960s and 1970s.

Chosen to host the AFC U-19 tournament last fall, a first, and under the tutelage of newly appointed, German coach Gerd Zeise, Myanmar stumbled early but managed to sneak into the knockout phase on a razor-thin goal differential. There, against an unbeaten United Arab Emirates, the squad pulled off a shocking home upset to earn a trip to the under-20 World Cup.

Sure, the team lost to eventual champions Qatar in extra time, but the big prize, a trip to New Zealand had already been secured.

WHAT TO EXPECT FROM MYANMAR

As we’ve seen countless times in CONCACAF, scouting this type of squad can prove problematic. Small nations with teams that feature athletes who play domestically are almost by definition anonymous entities. Thanks to some intrepid YouTubers, however, there is ample video evidence of the team’s recent exploits.

The score lines vary wildly—a 3-0 win vs. Malaysia; a 6-0 loss vs. Serbia; a 4-3 win vs. Vietnam—but Myanmar shouldn’t be underestimated.

Zeise, a former scout for Hertha Berlin with coaching experience in Japan, Korea, and China, transformed the squad and has enjoyed a torrent of support. The journey began last August when the team took home the Hassanal Bolkiah youth championship. Showing a dominant streak, the squad easily ran through its regional competitors on a six-match winning streak. Three months later, home matches during the U-19 Championship knockout rounds saw raucous crowds of nearly 30,000 cheering on their countrymen.

In a recent interview with FIFA.com, Zeise spoke frankly about his team’s strengths and weaknesses, including what he considers its secret weapon: fraternity.

“I’ve now been with this team for the past 18 months,” the 62-year-old said. “We’re together every day and train like a club side … we’re a collective unit, with every member of our squad working extremely hard to achieve their goals.”

In the same interview Zeise discussed some of the drawbacks with leading this fledgling team into the top level of international competition—revealing some weaknesses that may not be readily apparent outside of the AFC cocoon. Emphasizing physicality and mental strength as the make-or-break characteristics for the upcoming tournament, Zeise has suggested that the White Angels must play a little devilish if they hope to contend with a physically superior American side.

At first blush Myanmar looks a tactically disciplined group. Growing up playing the national sport, an ancient game called Chinlone, Burmese players are used to having the ball at their feet and working in a collective effort. More feather than sledgehammer—finesse over force of will—the team doesn't have the personnel for physical, direct play. Its players are not overly flashy but still display a technical quality that can cause issues.

In several instances the team has demonstrated extremely high lines of swarming confrontation utilizing two dedicated strikers, a strategy that produced two simple counterattack goals in a 3-0 win over Thailand during the U-19 championships.

Watch the free kicks, too. They got routines.

Even with hours of game tape, it remains difficult to make a relative evaluation due to sub-standard competition. For a psychologically apt comparison, I think of Haiti during the 2013 under-20 CONCACAF qualifying cycle. A relative unknown to even those steeped in all things CONCACAF, Haiti kept the U.S. on its back foot for the bulk of a very nervy 2-1 win for the Americans.

A similar air of mystery provides Myanmar with certified underdog status—a psychological boost that can prove troublesome for big countries hoping to avoid embarrassment. The team’s tightknit mentality could embolden it. The team isn’t even supposed to be here and will likely display a nothing-to-lose mindset.

Ziese had this to say about his team's chances: “We can’t demand too much. Above all we want to gain experience. But I can promise that my team will give everything for their country and then some.”

Speedy midfielder Nyein Chan Aung and the strike force combination of Maung Maung Soe and Aung Thu possess a majority of the team’s offensive invention and output, combining for 12 goals during the year-long run up to the World Cup.

Chan Aung is extremely crafty on the ball and loves taking 1v1 opportunities on either wing. Thu, who has a penchant for long-range strikes, is a Ziese favorite.

“Every move he makes is an intelligent one,” the coach said of Aung. “Before he even receives the ball, he already knows what he’ll do next and again after that, but he does it all for the team, not for himself.”

It’s also worth mentioning that the team would not even be here if it wasn’t for two outstanding performances by goalkeeper Myo Min Latt early in qualifying.

What to Expect from the U.S.

The Americans, of course, will be favorites in this match. Physicality, speed, professionalism, and pedigree all tip the scales in its favor. Trouble is, in the youth ranks especially, these games are not played on paper. Anyone even slightly familiar with CONCACAF knows the trouble that minnows can cause.

I’d like to see the first match before I make any grand, sweeping statements about Tab Ramos' men and their prospects in New Zealand. Instead, I will just leave you with my sure-to-be-wrong projected Starting XI.

The U.S. under-20s will kick off against Myanmar at midnight late Friday/early Saturday Eastern time on Fox Sports 1. Get the coffee ready and enjoy!