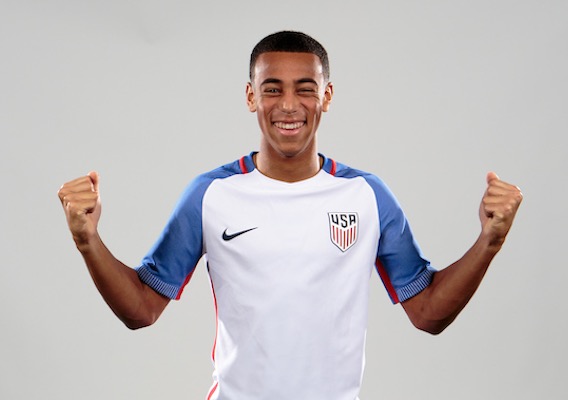 The United States men's national team has its first roster post-World Cup qualfiying failure, and there are some new faces (and one key missing one). Brian Sciaretta breaks it all down.
BY Brian Sciaretta Posted
November 07, 2017
10:20 AM

The United States national team staff led by Dave Sarachan today unveiled a youthful 21 player roster that will take on number three ranked Portugal next week on November 14. After failing to qualify for the 2018 World Cup, this is the first of many steps in introducing a new generation of American players.

The holdovers from October’s roster are minimal with just Tim Ream, Jorge Villafana, Kellyn Acosta, and Jorge Villafana taking part. But there were some other factors in the decision making in that players still involved in the MLS playoffs were not removed from their teams. Christian Pulisic was given a break and Bobby Wood needed to deal with a lingering knee injury.

Sargent hits U-17, U-20, and full team in one year
It has been a remarkable year for Josh Sargent who was stellar for two youth World Cup teams and now has the chance to earn his first national team camp. Next year he will join Werder Bemen but this is a testament to how highly U.S. Soccer rates the talented St. Louis native.

McKennie and Adams are the big new midfield arrivals.
Schalke’s Weston McKennie and the New York Red Bulls’ Tyler Adams are the most anticipated new arrivals., Adams and McKennie have had breakthough seasons in 2017. Developed at the FC Dallas academy before joining Schalke in 2016, McKennie has been starting in the Bundesliga for a very strong team. He was asked to join the U-20 World Cup team only to have Schalke deny his release.

Meanwhile, Adams has been a consistent starter with the Red Bulls this year and was exciting to watch on the field where he played but central midfield and right wingback. He was also a leader on the 2017 U-20 team despite being eligible for the 2019 U-20 World Cup team as well.

Jonathan Gonzalez is the surprising omission
Despite being one of the best American teenagers this year as a consistent starter for Liga Mx-leading Monterrey, Jonathan Gonzalez was not on the roster for this game. The California native is a dual national but has been part of U.S. youth national teams since the U-14 level. In February, he participated in U-20 World Cup qualifying. Despite interest from Mexico, Gonzalez has been adamant about his desire to play for the U.S. team and he reiterated that sentiment to ASN in July and to various media through last week.

It is not clear if he was not selected or wants to stay with his club but if he continues his progression, 2018 would seem like a likely time for him to get his debut.

Carter-Vickers and Mizaga reunited
Followers of the U.S. youth national teams will fondly recall how well Matt Mizaga and Cameron Carter-Vickers performed together at the 2015 U-20 World Cup where they were among the best defenders at the tournament.

Now, both appear ready to take big roles with the team along with mainstay John Brooks.

Carter-Vickers always had the talent but now he finally has the playing time where he is starting for a promotional-contending Sheffield United. Still 19, he has finally shaken off the rust from sitting on Tottenham’s bench and is blossoming into the player many expected him to be.

Miazga, meanwhile, is a mainstay with Vitesse and won the Dutch Cup earlier this year. The New Jersey native is still only 22, but struggled to break into the national team under Jurgen Klinsmann and Bruce Arena. As many of the older generation move on, Miazga could be poised to take a big role.

Overlooked veteran leadership present
Having an entire team of youth was always unlikely as there needed to be a veteran presence. Alejandro Bedoya makes sense as his effort was always top notch and he has a long history with the team.

But some of the other names are interesting, Eric Lichaj and Danny Williams are both pushing 30 an neither ever were a consistent presence on the team. Dom Dwyer and Kelyn Rowe make a return after being cut from the Gold Cup team after the group stages.

DeAndre Yedlin, meanwhile, is one of the players who should be expected to step up as he is still only 23 and has World Cup, Premier League, Championship, MLS, and youth World Cup experience. Will he emerge as captain material?

There is no Altidore, Dempsey, Bradley, Cameron, Howard, or any other consistent figure with the team. It will be interesting to see who steps into the leadership role. It could be one of the defining questions from this camp.