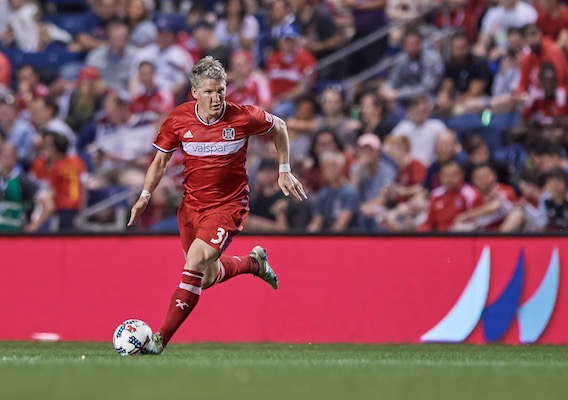 The Fire's dynamic duo will roll into RFK this weekend to face a beleaguered D.C. United squad. Also, watch for the Michael Bradley-Sacha Kljestan clash as Toronto FC takes on the New York Red Bulls.
BY Franco Panizo Posted
May 19, 2017
6:55 AM

BASTIAN SCHWEINSTEIGER has provided a major boost in the Chicago Fire’s transition from irrelevancy to potential power. Dax McCarty has done his part, too.

No Fire newcomer may have done more for the turnaround, however, than forward Nemanja Nikolic.

Nikolic has taken MLS by storm during the opening 11 or so weeks, scoring a league-best 10 goals to help the Fire sit somewhat comfortably in fourth place in the Eastern Conference. His production and confidence in front of the net were highlighted with his midweek brace in a 3-0 beat down of the Colorado Rapids, and that spells nothing but trouble for his next opponent.

Leading the league in goals? Been there before ???? https://t.co/EiZYMyAOuN #cf97 pic.twitter.com/urHS4SU67t

Struggling D.C. United will be tasked with trying to slow down the 29-year-old striker on Saturday afternoon when Chicago visits RFK Stadium. The good news for D.C. is that the Fire has yet to win on the road this year, going 0-3-2 even with Nikolic’s goal-scoring prowess. Still, the challenge will be made all the more difficult by the loss of the suspended Luciano Acosta.

Without Acosta, D.C. United will be missing its most creative attacking weapon. Not having the Argentine on the field might welcome Chicago to be more aggressive from the onset, which could lead to trouble given that D.C.’s defense has been less than convincing as of late.

D.C. United need to find a way regardless, be it through Patrick Mullins’ nose for goal, Lloyd Sam’s play on the wing, set pieces, or something else. The club has won just once in its last five outings to free-fall to 10th place in the East, and another defeat at home could drop D.C. into the cellar that Chicago used to reside in regularly.

Two Eastern Conference teams that have been very convincing in recent weeks are Toronto FC and, yes, the Philadelphia Union. Both have pieced together respectable unbeaten streaks, and will put them on the line against opponents on the decline.

First, Toronto FC will try to extend its club record six-game winning run when visiting Red Bull Arena to square off with the New York Red Bulls in Friday’s lone affair. Toronto will be without Sebastian Giovinco because of a quad injury, but have shown this year that they can make do without him thanks to strong contributions from the likes of Raheem Edwards, Tosaint Ricketts, and Jozy Altidore.

One day later, the suddenly in-form Union will attempt to add to its undefeated spell of five matches (including four straight shutouts) when the dismal Colorado Rapids come to town. Philadelphia will be playing on short rest after blanking the Houston Dynamo on Wednesday, but has the luxury of not having to travel for the Saturday showdown since it will also take place at Talen Energy Stadium.

The Union should feel good about its chances of picking up three more points in this one, especially since its Oguchi Onyewu-led defense is colliding with Colorado’s feeble attack. Philadelphia as a whole has done a better job of team defending as of late, and that has been a key ingredient to the club outscoring opponents, 9-0, in the past four games.

Of course, the Union will have to score against the Rapids to collect another win, but that should prove no problem so long as Ilsinho continues to pull the strings from the No. 10 spot as effectively as he did against Houston.

The European leagues may be winding to a close and some of the unfinished storylines may be a foregone conclusion, but that does not necessarily mean you need to turn your attention to all MLS matches this weekend.

Look no further than Saturday’s fixture between the Seattle Sounders and Real Salt Lake as an example of one you could afford to miss.

The two Western Conference clubs are in a bad way right now. Yes, RSL won on Wednesday, but it narrowly defeated a New York City FC side that rested several regulars. Seattle, meanwhile, has lost three in a row and is winless in four after falling 3-0 to Sporting Kansas City during the midweek slate.

There will certainly be talented players on display at CenturyLink Field, including Jordan Morris and Albert Rusnak, but there is a season why Real Salt Lake is in ninth place and the Sounders in the 10th in the West.

If there is an individual match-up to watch during this round of action, the battle between U.S. national team central midfielders in the New York-Toronto tilt is it.

Michael Bradley and Sacha Kljestan will meet on Friday night and the winner of their duel could end up being the deciding factor in the Eastern Conference clash.

Bradley had a tough time last week defending Minnesota United’s attack, and getting beaten so easily again against Kljestan and a Red Bulls side that loves to high press to force turnovers is something Bradley needs to avoid in order for Toronto to have a chance at prevailing.

Kljestan, meanwhile, needs to get back to doing what he does best. He admittedly has had issues this season getting the ball in dangerous positions, and that has affected both his and New York’s performances. Another subpar outing against Bradley would likely spell more trouble for the Red Bulls.