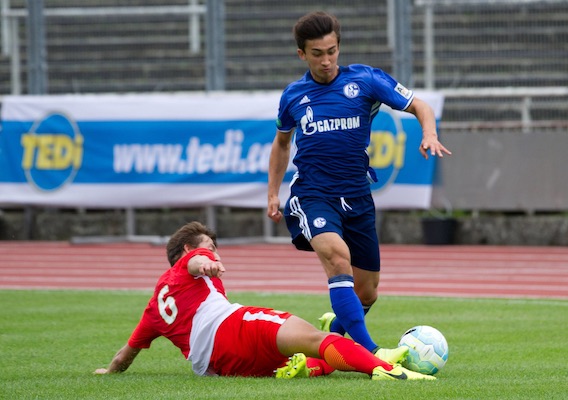 Schalke's Nick Taitague: "I Am Up for the Challenge"

The 18-year-old winger is part of a young generation of promising Yanks who are making noise in the Bundesliga. ASN's Brian Sciaretta spoke with the Virginia native about playing soccer overseas.
BY Brian Sciaretta Posted
October 02, 2017
10:00 AM

TEENAGERS ARE THRIVING in American soccer circles. Christian Pulisic, of course, is a household name and just received the star treatment on 60 Minutes. Weston McKennie is starting for Schalke in the Bundesliga. Tyler Adams is excelling on the Red Bulls and Jonathan Gonzalez is a rock in central midfield for Liga MX runaway leaders Monterrey.

And then you have Nick Taitague, 18, who could be next to breakthrough. The Richmond, Va., native, is the youngest member of Schalke’s American trio, which includes McKennie and Haji Wright. An explosive winger playing for Schalke’s U-19 team, he is considered a top prospect for both club and country.

“I think Nick Taitague is as exciting of a young player that we've had come through to the U-20s,” Tab Ramos said recently. “So we're very excited about him.”

With the U.S. U-18 team now in Spain for a pair of friendlies during this international break, Taitague is part of a group that will likely become the core of the U-20 national team for the 2019 cycle. It will be his first international involvement of 2017 and he is happy to be back.

“I’m very excited,” Taitague told American Soccer Now. “I haven’t been with a national team since December when I played with the U-20s. It will be a nice change of scenery and I am happy to be back with the national team over the break. I know there are a lot of good players so I know it won’t be easy.”

It has been hard for Taitague to find time to play for the U.S. Ramos tried hard to get McKennie and Taitague released for the 2017 U-20 World Cup but Schalke wouldn't allow it. McKennie was an established player for that team, a squad that advanced to the U-19 Bundesliga semifinal.

But Taitague only joined the club in February shortly after his 18th birthday. Despite his late arrival, however, Schalke did not want to let him go until after the U-19 Bundesliga season which would cause him to miss the U-20 World Cup. It was a tough setback for Taitague but he knows that at this stage of his career, his club comes first. Now he hopes the scheduling could work out that would allow him to play with the 2019 U.S. U-20 team.

“It was tough—for Weston as well,” Taitague said of missing the U-20 World Cup. “We talked every day about it. Knowing you could play in a tournament that big and you could get that chance was huge. But at the same time, I just signed a contract with Schalke. Here, and as it should be, your club comes first. For the coaches and everyone, it was a highly anticipated time for me to start my Schalke career.

"In the end it was important for me to stay.”

Taitague's paternal grandfather is from Guam and his father played the sport up to the NCAA level at Hampden–Sydney College—until a knee injury derailed his career. He grew up a Manchester United fan and would watch the Red Devils play during their preseason tours of the United States. Like many young attacking players of his generation, Taitague's favorite player was Cristiano Ronaldo.

Now Taitague wants to begin making his first footprints in the game at the professional level.

“As I grew older and into myself, the move abroad was the most important to me because I wanted to play at the highest level I could possibly play,” Taitague explained. “For me that was making the move abroad and when I was offered the deal at Schalke, I really wanted to take advantage of it. It was the only thing on my mind.”

But that move has taken time for Taitague to adjust both on and off the field. Taitauge is still studying German and having good friends in Wright and McKennie, as well as Pulisic at nearby Dortmund, has helped immensely. Unlike the others, Taitague did not have to attend school in Germany because he was able to finish high school in the United States. That limited his social integration abroad at first but his friendship with the American players helped.

On the field, he has also had to learn a lot. When he arrived at Schalke, Taitague's plan was to play as a traditional No. 10, a playmaker's role he has known his whole life. But the coaches at Schalke realized his elite skillset actually made him a better winger.

It took time to get used to but Taitague is happy with the positional switch and his adjustment overall into the high levels of German soccer.

“As I got here, I realized my strengths were out wide, where I could get isolated in 1v1 situations,” Taitague said. “I think that is where I was the most dangerous on this team. I think that is what my coach thought was best. I stuck with it and I demanded a lot of myself to improve my speed and 1v1s. I am now happy to play out wide and I think I’ve turned that into my best position at the moment.

“Playing in the 1999 and 1998 age group in Europe, you see how smart and intelligent the players are here,” he added. “That gave me a good platform to base this season off of in getting used to the feel of the game. Right off the bat I could tell it was faster and more aggressive. I worked a lot this summer on getting bigger and more physical. I think this year I expect to perform well. Last year I had a willingness to learn and a lot to learn. This year is very important to me and I think I've gotten off to a decent start—our team as well.”

The success of young Americans in Germany has been a huge development for American soccer that might pay huge dividends to the U.S. national team in the future. Taitague says that the success of Pulisic and McKennie serves as “great motivation” for him and notes that the players all push each other to raise their levels.

"Nick, Haji, along with Christian, they are all really good friends of mine in Germany," McKennie said. "I really like playing with Nick. He is quick and very dynamic in and around the box. I think he is going to be a special player for us in the future."

But will Taitague follow in McKennie’s footsteps as another American teenager into Schalke’s first team in the Bundesliga? He still has several big hurdles to cross but all signs point to him being on a very good path.

“I feel like I am getting closer,” Taitague said. “I had an appearance in a friendly and I think I did really well. The coach told me I had a great game and said to keep doing the same thing with the U-19s and when I am ready, I can get pulled up. It's possible but I feel like I still have some things to work on. I am willing to put in the work necessary. My coach wants to see me take over games as a bridge to the first team.

"I feel like I am up for the challenge.”