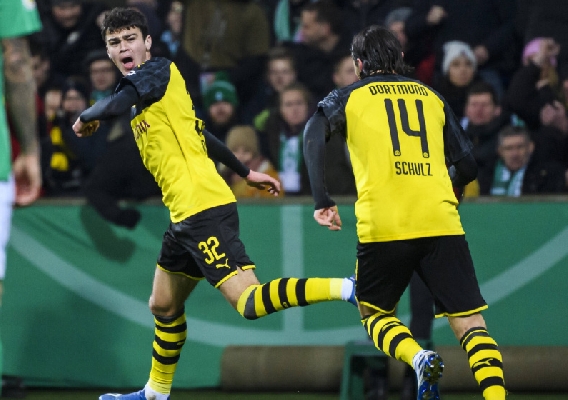 There is no denying that the wave of injuries to American players will take a lot of the excitement out of this weekend's games. But ASN's Brian Sciaretta still found enough to look foward with his weekend preview.
BY Brian Sciaretta Posted
February 21, 2020
2:00 PM

TYPICALLY, THIS weekly column highlights and previews the 10 best games to follow from an American perspective in a given weekend. This weekend, however, is far more difficult because in addition to MLS being out of season, the number of injuries among Americans in Europe is staggering.

Then in addition to this, you have your players who are in bad situations at their clubs which have glued them to the bench – Bobby Wood, Matt Polster, Fabian Johnson, and Ethan Horvath are the best examples of this.

Then you had a few Americans abroad who played on Saturday – Tim Ream and Andrija Novakovich. That was actually a mixed bag. Tim Ream’s handball gifted Derby County a penalty which led to a Wayne Rooney goal in a 1-1 draw vs. Derby. But Andrija Novakovich had one of the best games of his young career when his goal and assist lifted Froninone to a 2-0 away win over Cosenza. Fronsinone, meanwhile, is now in the automatic promotion places for the first time in the Serie B season.

But due to injuries, benchings, and Friday games, just coming up with 10 games to follow this weekend from an American perspective is hard.

But it still can be done, and here they are

Werder Bremen is in second to last place and is staring the prospect of relegation in the face. A loss here will only likely dig the hole deeper. Josh Sargent has shown very little for Werder since the Bundesliga resumed from winter break. He is not the team’s problem but he has not been a solution either.

Meanwhile, Giovanni Reyna has been exceptional for Borussia Dortmund in recent weeks and has been given more and more responsibilities. Midweek, Reyna came into a Champions League game vs. Paris St. Germain with Dortmund trailing 1-0. The 17-year-old eventually assisted on the winner. The combination of Reyna and global sensation Earling Haaland has made Dortmund one of the most exciting teams to watch.

These two teams met two weeks ago in the German Cup and Reyna ended up scoring a sensational goal in what was actually a loss 3-2 loss for Dortmund. Asking Werder to win this game – and two consecutive games against Dortmund, will be hard. But Dortmund has plenty of motivation in this game to qualify for the Champions League next year and the club sits in third place (but is only two points clear of the fifth-place Bayer Leverkusen.

Pellegrino Matarazzo is one of the best stories in the world of Americans abroad. Born and raised in New Jersey, Matarazzo was hired as Stuttgart’s head coach in the winter break to help guide it to promotion. Since taking over, the club has acquired 10 out of a possible 12 points in the 2.Bundesliga and it still holds its grip on third place. If Hamburg stumbles, a Stuttgart win could send it into second place.

Matarazzo’s rise to being Stuttgart’s manager was rapid and surprising but he is off to a fantastic start.

At first, it looked as if Jesse Marsch and his Red Bull Salzburg team were going to coast to the Austrian Bundesliga title this year. But the club dropped points in draws in the fall due to the fact the Champions League forced squad rotation. Then over the winter break, Salzburg sold three of its best players – including Earling Haaland. The club lacks much of its firepower and last weekend it lost its first league game of the season to LASK. That result saw LASK leapfrog Salzburg for first place.

Salzburg will attempt to climb back into first place but standing in his way is Austria Vienna who start American central defender Erik Palmer-Brown in the backline. Palmer-Brown is trying to boost his stock and get back into the picture for the national team or U-23 team. A win over Salzburg would highlight his season.

It has been a weird season for U.S. national team defender John Brooks who was a regular starter and a solid contributor in the first half of the season. He was benched for awhile starting the second half of the season but has since taken advantage of a red card suspension to Marin Pongracic to get back onto the field. Brooks was mediocre last weekend in a win over Hoffenheim but was solid in a midweek win over Malmo in the Europa League.

Brooks remains a talented player but one also with a short leash with manager Oliver Glasner. If he wants to continue to start for ninth place Wolfsburg, he will need a strong outing vs. Mainz to continue to build trust with Glasner. That would also have the added benefit of giving Brooks momentum heading into the November international window.

Once left for dead in the relegation zone of the Championship, Luton Town is now coming off two consecutive wins and is just four points from safety. Saturday’s game against 19th place Charleton Athletic is winnable for Luton Town and that would put the club within striking distance of emerging in the survival places.

United States U-20 central defender Cameron Carter-Vickers, who joined Luton Town on loan from Tottenham after his previous loan to Stoke City was prematurely terminated, had his best game of season last weekend in a 1-0 away win over Middlesbrough. Right now, every game is critical for both him and Luton Town. If Carter-Vickers can play well then perhaps he can finally find a club who will purchase him outright from Tottenham.

Sergino Dest has had a breakout season. It hasn’t always been smooth but for a teenager to start most of Ajax’s games in the Champions League, Dutch Cup, Europa League, and Eredivisie is a major accomplishment.

In recent weeks he’s played well although the 2-0 midweek loss to Getafe in the Europa League was one which everyone on Ajax would like to forget. Ajax has a six point cushion atop the Eredivisie standings and would like to keep it that way with a win over 10th-place Heracles.

Chris Durkin has been a regular starter for St. Truiden for more than two months and has generally performed well enough to where you would expect the club to pick up the option to buy on his loan from DC United.

But Gent is one of the best teams in Belgium and currently sits second. St. Truiden is one of the smaller clubs in the league and sits in 12th place and this will be a big test for Durkin and St. Truiden. While St. Truiden is unlikely to compete for a European spot or get relegated, the opportunity for its players is likely on an individual basis. For Durkin to build up his value, solid performances against clubs like Gent help. It also might put him back into the U-23 picture.

Surprisingly, Pumas has emerged as the early leader in Liga MX. U.S. U-23 attacking midfielder Sebastian “Bofo” Saucedo is one of the team’s starters. Morelia, meanwhile, is off to a terrible start in the Clausura where it has just five points from six games

It could be a big year for Saucedo who is chasing silverware in Mexico and could head to Tokyo this summer in the Olympics if he can help the U.S. team qualify next month. Saucedo has performed well since moving to Pumas from Real Salt Lake in December. But he is one of the least talked-about players in the U-23 pool but he’s turning into an exciting prospect.

Kansas City-born forward Nicholas “Niko” Gioacchini, 19, has earned a lot of playing time in France’s second tier with SM Caen this year. Thus far has been a great learning experience for him and he has scored two goals in 13 appearances.

But SM Caen has been drifting towards the relegation zone in recent weeks and the upcoming schedule will be tough. An away visit to third-place Lens on Saturday will be especially tricky. For Gioacchini, he has never represented the United States before at any level and is probably behind a number of players at the moment. But he has made a lot of progress this year and the combination of youth and playing time will keep him in the mix.

Fortuna Dusseldorf will have an uphill climb if it wants to avoid relegation but Saturday is a big opportunity. It is currently in the relegation playoff position but is ahead of Werder Bremen only on goal differential and is ahead of last-place Paderborn by just a point. But Werder Bremen has a very difficult game vs. Borussia Dortmund and Paderborn visits Bayern Munich.

Fortuna Dusseldorf has the easiest of paths for points this weekend among the bottom three. But seventh place Freiburg on the road is still very difficult.

Zack Steffen has been out for Fortuna Dusseldorf in recent weeks due to a bad knee. But U.S. national team midfielder Alfredo Morales should get the start and Fortuna needs to play with desperation if it wants to avoid the drop.