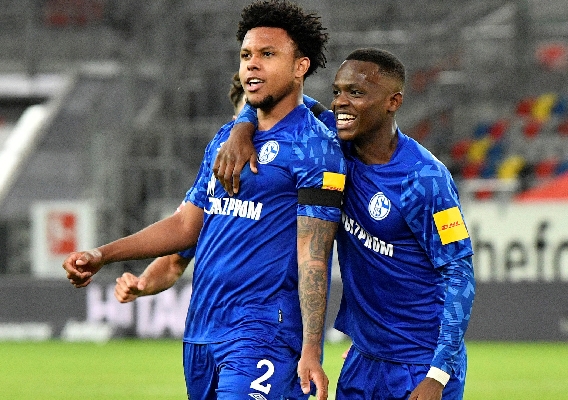 The Bundesliga continues to roll on and dominate the soccer world. ASN's Brian Sciaretta is here with his weekend preview with a focus on American players and coaches in the league.
BY Brian Sciaretta Posted
May 29, 2020
9:55 AM

THE GERMAN SEASON continues to roll on this weekend and there will be several Americans with a lot to prove in a bunch of important games.

As the season draws to a close, the games become more important. Bayern is almost certain to win the Bundesliga again, but throughout the slate of games Americans are involved in games that involve promotion, relegation, and European placements. Individually, several players are trying to stake claims in the starting lineups, prove their value in big games, and even make their debut.

This weekend will hopefully answer some questions, but here are the first ones I think about

This weekend will offer some valuable clues. Here are the previews of the games that might offer some clues.

This is a big game for two American players and one American manager. Schalke central midfielder Weston McKennie and Werder Bremen forward Josh Sargent have both started the past few games.

For Werder Bremen, this is a huge game. It is trying to make up a five point deficit on Fortuna Dusseldorf for the promotional playoff position, instead of automatic relegation. Werder has a game in hand on Fortuna and this weekend, Fortuna has to face a Bayern Munich team that is heavily favored. Schalke is a poor team at the moment and this is Werder Bremen’s chance to make a serious push.

Josh Sargent has started Werder Bremen’s last two games and has certainly had some positive moments. He still needs to see more of the ball to be involved with dangerous scoring chances. But the team has responded well with him in the lineup and it has four points from two games.

For Schalke, it won’t face the threat of relegation and its chances from Europe are essentially over. What it needs now is to simply play better. Can it gain confidence under former U.S. international David Wagner as its manager? Can it create chances and play attractive soccer? How will Wagner respond?

McKennie has played well recently although his turnovers could be a sign that he’s trying to do too much. Can he find a way to limit them while also being very effective defensively?

Consistency, not talent, has always been the issue for John Brooks but since he regained a spot in Wolfsburg’s starting lineup in mid-February the U.S. national team central defender has been in terrific form. In his last game, a 4-1 win over Bayer Leverkusen, Brooks had his best game of the season. Now he will look to continue Wolfsburg’s push for a Europa League spot. It currently sits in sixth place which would give Wolfsburg the league’s final Europa League spot.

In Wolfsburg’s way will be another in-form German-American in Timothy Chandler. Chandler, 30, scored his fifth goal of the season in a 3-3 draw against Freiburg. In the game, Freiburg trailed 3-1 but rallied for the draw. Chandler scored in the 83rd minute, one minute after entering the game, to help Freiburg earn the point.

Chandler has scored all of his goals since January and is proving to be an effective super-sub. But Eintracht Frankfurt has had a tough run lately. Prior to its midweek draw, it had lost four games in a row and now sits in 14th place, just two points from the relegation playoff line.

But also in this match is a potential Ulysses Llanez debut for Wolfsburg. Llanez was an unused sub midweek but is apparently set to make the matchday roster again against Eintracht Frankfurt.

Fortuna Dusseldorf will need a miracle in this one to earn a result against one of the world’s best teams in Bayern Munich. It will take Bayern Munich having an exceptionally off-game for that to happen.

But Fortuna Dusseldorf is playing very hard at the moment and it came from a 1-0 deficit midweek to earn a 2-1 win over Schalke. It was an inspired performance of a team desperate to avoid relegation.

Alfredo Morales has started most games but came off the bench vs. Schalke to preserve the win.

It will take something special from Fortuna in this one – and its players will certainly be watching the scoreboard hoping Schalke can prevent Werder from winning.

Borussia Dortmund probably won’t be able to catch Bayern Munich anymore but it will be looking to secure its spot in the Champions League next season. Right now Dortmund sits in second and has a four point cushion on a Champions League place and Paderborn sits in dead last.

This might big an occasion where Gio Reyna gets his first Bundesliga start. That has been building and the factors might lineup on Sunday for that to happen.

On Monday, RB Leipzig will try to get back on track after a disappointing 2-2 draw against Hertha midweek. Tyler Adams only started after Kevin Kampl suffered an injury in warm up but he went the distance at right back.

The big question for many American fans is when Adams will get the start in central midfield. In the game last weekend, Adams completed all off his passes coming off the bench in a 5-0 rout over Mainz. Koln has not been very good and this might be an opportunity for Julian Nagelsmann to mix things up.

These are big games for RB Leipzig and the club sits in fourth place with just a two point cushion on Borussia Monchengladbach for the last Champions League place so Leipzig will have bring intensity with a lot on the line.

In a game that means a lot for both teams on different ends of the 2.Bundesliga table, second place Stuttgart hosts last-placed Dynamo Dresden on Sunday.

On Thursday, Stuttgart awarded American manager Pellegrino Matarazzo with a contract extension. That night, the club defeated Hamburg SV 3-2 after trailing 0-2 at halftime. With that win, Stuttgart moved from third-place and into second place – which is automatic promotion.

But Dynamo Dresden will present a desperate opponent for Stuttgart but one that is also on a roll. Despite its last-place standing, the club has won two in a row – both against top 10 opponents.