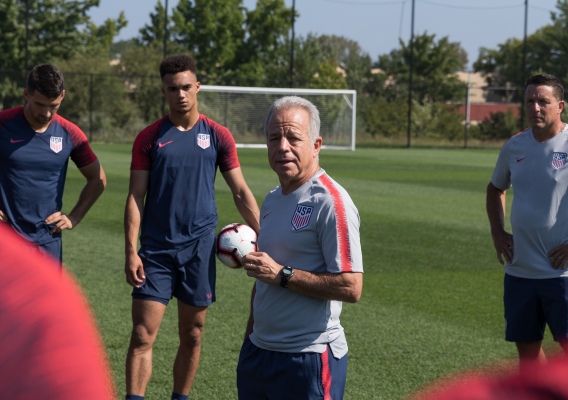 In likely his final games at the helm of leading the U.S. team, Dave Sarchan will finally get a look at Tyler Adams, Christian Pulisic, and Weston McKennie together who are all named to the strongest U.S. roster of the year.
BY Brian Sciaretta Posted
November 06, 2018
1:55 AM
United States national team interim head coach Dave Sarachan unveiled likely his final roster as head of the team on Tuesday for a pair of upcoming friendlies against England and Italy. The roster is large at 28 players and once again includes many of the top young players in the country.

Of note is that for the first time, the U.S. team might include a midfield of Tyler Adams, Weston McKennie, and Christian Pulisic who are all included on the roster. Injuries and fatigue have prevented Pulisic and McKennie at various times in 2018.

Below is the roster as well as a few key thoughts.


There should be a great deal of excitement over the options in the midfield. Christian Pulisic has played just once with the team over the past year and that came against a poor Bolivian team. The Borussia Dortmund attacker will now get a chance to play against high-quality opposition.

In addition, Weston McKennie and Tyler Adams will also join the fold. All three players have extensive history with U.S. youth national teams but could play together for the first time on the full national team. Sarachan will finally get a chance to roll out a starting XI that resembles the best options that have emerged over the past year.

After those three, there is still a lot of options for Sarachan and it should make for a competitive group.

Among those joining the fold this time is debutant Romain Gall and Sebastian Lletget who has not played with the team in over 18 months. Those two play more of an attacking role as opposed to the numerous No. 6/No. 8 hybrid-type midfielders.

The French-born Gall has worked hard to earn his debut and clearly deserves it after emerging as a top scoring threat in Sweden’s Allsvenskan with defending champion Malmo. As for Lletget, he was promising in 2017 to start his international career but suffered a serious injury after scoring in a World Cup qualifier against Honduras – which kept him out most of the remainder of the year.


There are a lot of question marks and opportunities along the backline. Matt Miazga and Cameron Carter-Vickers are mainstays but neither play regularly for their clubs. Will rust and confidence be an issue for either? Does that open the door to Walker Zimmerman or Aaron Long who made his national team debut in October and is likely to win the MLS Defender of the Year award this week?

Fullback also presents its own questions.

At right back, DeAndre Yedlin is a mainstay as a Premier League starter with Newcastle United. Behind him is not clear. Reggie Cannon, 20, is an Olympic candidate and impressed in his U.S. debut last month against Peru. But Shaq Moore is also on the team and he was Yedlin’s backup for most of the year. Who will emerge in a competition between Moore and Cannon for the backup right back spot?

At left back, there is total confusion. That position has always been an Achilles Heel for the team for generations. Antonee Robinson has been up and down in 2018 with the team but none of the other options (Ben Sweat, Eric Lichaj) looked up to the task on that side. Jorge Villafana returns to the team but is he a better option that Robinson?


There are two forwards on this roster, which is telling of how few options exist there. Andrija Novakovich is injured and an injury to Jozy Alitdore probably is the reason he is not making his return. It’s not a good situation right now.

Yes, there are some other ways the team can play. Tim Weah can shift to forward if needed but the position is just remarkable thin. It puts a lot of pressure on players like Josh Sargent, who hasn’t even started his professional career, and Bobby Wood, who is in another tough relegation battle at the moment with Hannover.

In the years ahead, U.S. Soccer, Earnie Stewart, and the next head coach really have to hope more options emerge up top.

Sarachan said that in his roster there is really a need to continue to look at younger players. That specifically was part of the answer as to why Michael Bradley is not back with the team.

“With Michael Bradley, there are a couple reasons,” Sarachan said. “The first is that after having earned 142 caps, his need for these games is far less important than it would be for players with less experience. Secondly, Michael’s schedule the past two years with Toronto FC has been virtually non-stop and he has largely played without a break.”

Are there any surprising omissions among players hoping to make their debut on this roster along with Romain Gall?

The absence of Russell Canouse stands out as the DC United No. 6 impressed greatly this year to help his team reach the playoffs. 2017 U.S. U-20 World Cup forward Emmanuel Sabbi had a strong start to the season in Denmark with Hobro but has cooled off quite a bit and is without a goal or an assist in nearly two months

Among those players who have seen time with the U.S. team in 2018, the absence of Paul Arriola and Tim Parker standout although Sarachan probably did not want to force the Red Bulls into missing both central defenders and Arriola has also been through a lot this year both on and off the field. January camp under the next manager remains an option. Jonathan Amon also made his debut for the team in October but will probably be added to the U.S. U-20 team for the second stage of World Cup qualifying - which takes place in the international window.