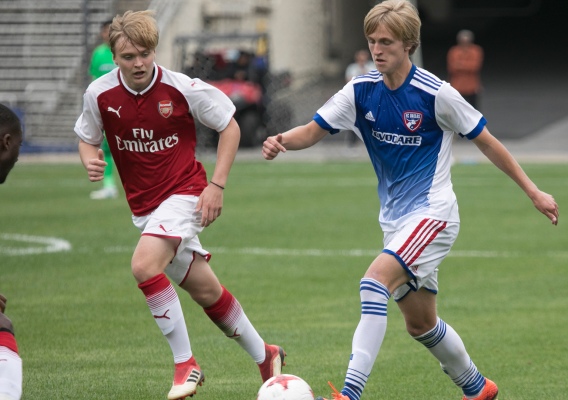 Roberts holds ambitious goals in 2019 for both club and country

Thomas Roberts is one of the top American players of his age group and 2019 could offer him plenty of opportunities with United States youth teams, FC Dallas, and possibly Bayern Munich.
BY Brian Sciaretta Posted
November 27, 2018
2:00 PM
WHEN FC DALLAS entered into a partnership with German giants Bayern Munich, there was a lot of opportunity for both clubs. For Dallas, it offered a great selling point for its talent-rich academy players that a formal pathway has been created to one of the best clubs in the world. For Bayern, it was a chance to tap into the American market.

So far, both clubs have benefited from the agreement. Earlier in the year, Bayern Munich acquired United States U-20 defender Chris Richards on loan and the Alabama native is performing well for Bayern’s U-19 team – where there are growing rumors the deal might be made permanent.

The potential next link in the deal in the partnership is Thomas Roberts, 17, who is one of the top American players of the 2001-birth year class. The midfielder from Arkansas, who played as a No. 10 at the academy level but will likely play the No. 8 as a professional, has been affiliated with FC Dallas since he was 12 and moved to Texas with his family just to join its academy.

But like many top young American players, there are options as to where to begin their professional career. The partnership with Bayern Munich was a major factor why he decided to remain with Dallas and sign a homegrown contract over the summer.

“My dream has always been to play overseas,” Roberts told ASN. “When Dallas signed the partnership with Bayern, it opened the doors. It did for me and Chris [Richards] to go over there and show that we could play there.”

Last month, Roberts went to Germany for a 10-day training stint with Bayern along with fellow FC Dallas and U.S. U-20 central midfielder Brandon Servania. It was there he trained with both Bayern’s U-23 team and the U-19s. But the entire experience was eye opening on many levels.

Roberts trained on a field next to the first team and was taken back by how many supporters turned up for just an open practice (“I’ve never seen anything like that,” he said.) He also got to spend time with Richards who is a roommate of his in Dallas and a close friend.

Overall, he believes he performed well in Germany, which could pave the way to a return to the club in 2019.

“It was a really good experience,” Roberts said. “I was only there for 10 days and I wish I could have stayed longer. It was a successful trip.”

“He did really well. He was great,” Servania said. “Thomas is a really skillful player who is great on the dribble. I think they really liked him. Hopefully he can get back over there and start playing with their U-19s. I think he definitely proved himself that he deserves to be there and that he can play with those guys. Hopefully one day he'll be back over there.”

Perhaps one of the more interesting observations Roberts took from the stint was an appreciation to how hard FC Dallas works when compared with European counterparts. Roberts has trained with the first team at FC Dallas under former manager Oscar Pareja and now Bayern Munich’s U-23 team.

“It was a big adjustment for me when I first started, from the academy to the first team at Dallas,” Roberts said. “As the months went on, I think I’ve acclimated well to the level and I feel like I’ve become part of the team. When I was training with the U-23s [at Bayern], FC Dallas was just as good. Honestly, the training sessions at Dallas were harder than the training sessions in Munich. I don’t think anyone in the country works as hard as FC Dallas does in training.”

As for what next year holds, it is still an open question. He does not turn 18 until May 11, so even if Bayern and Dallas were to agree to a loan, he could not play abroad until then.

FC Dallas is also in a transitional state right now as head coach Oscar Pareja left the club earlier this month and his successor is yet to be named. But the club has a lot of talent in its academy and the next head coach is going to be tasked in bringing that next generation of players into the first team. Being part of that rebuild is a priority for Thomas, as well as possibly a loan to Bayern later in the season – but that could depend on his first team success early in the year.

“I want to make my debut for Dallas, which would be a dream since I’ve been playing for them since I was 12. I want to make my debut before I turn 18,” Roberts said. “Once I turn, 18, if I do well, I could go on a loan there. That would be good for me because if I am not going to play here, I could get quality games with the U-19s there.. that’s really good exposure for me too.”

In addition to the club level, Roberts is also ambitious on the international front. In August, he was a key player for the U.S. U-18 team that won the Vaclav Jezek Tournament in the Czech Republic. It was in the final against Japan where Roberts scored the deciding penalty of the shootout to seal the victory.

But next year he also eyes the lofty goal of making the U.S. U-20 World Cup team – where he would be playing up a cycle. It’s a goal he believes is attainable and U-20 head coach Tab Ramos is familiar with Roberts as he also served as the U-18 coach for the Vaclav Jezek Tournament.

“We did really well in the Czech Republic,” Roberts said. “It was my biggest accomplishment so far because I scored the game winning penalty to beat Japan. That was a big step for me, confidence-wise. The U-20 team [next year] is a big goal for me, but I still have work to do to make that roster. I can play in the next one in 2021, but I want to play in this one in 2019.”

There is no question that 2018 was a transitional year for Roberts with signing his first pro contract with Dallas, gaining attention at Bayern, and winning with the U-18s. But next year with the new MLS season, a potential loan to Bayern, and the U-20 World Cup, he will have the opportunity to take things even further.