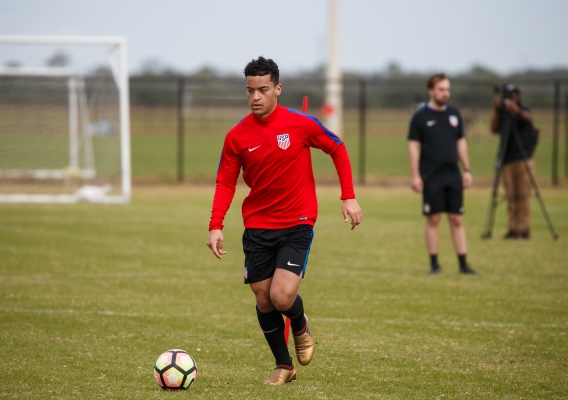 Rennicks & Servania impress post U-20s, plus lots of Americans on the move

It's a fun time right now for American soccer fans as the transfer season is already red hot and both national teams are playing important games. ASN's Brian Sciaretta looks at the transfer rumors as well as some nice performances from young players after the U-20 World Cup
BY Brian Sciaretta Posted
June 20, 2019
9:00 AM
IT'S A BUSY time right now in American soccer as the men’s and women’s national teams are involved in tournament, MLS is set to resume this weekend from a break, the U.S. Open Cup is in full swing, and the European preseasons just starting in some places.

After ASN was on vacation for the past few weeks, here is some news on recent events

Servania and Rennicks step up after U-20 World Cup


After the dust has settled from the U-20 World Cup and the takes become cooler and more measured, it seems that Brandon Servania had a good tournament. His problem is that he is a bit of a tweener in his position: is he a pure No. 6 or is he a No. 8? Far too often in American soccer midfielders seem to be murky in their positions/roles. Then when they have to move to another team or up to the national team, it becomes tough to place them.

Gedion Zelalem, Danny Williams, Keaton Parks, Emerson Hyndman, Jose Francisco Torres – heck even Michael Bradley and Jermain Jones have all been examples of players where finding them a position is tough. Weston McKennie could be in danger of it too. It’s tough to explain their position.

Brandon Servania has some impressive qualities and it will be interesting to see if Dallas can find a set role for him to grow. He still make some mistakes at the U-20 World Cup with some passing, but he read the game well and should improve with better playing time with Dallas as opposed to the USL – which he is beyond.

This goal from Servania last night in the US Open Cup was terrific (which Dallas lost 2-1 in extra-time to New Mexico United).


I thought a little about the U-20 World Cup on my long trip home from Italy yesterday. I think Brandon Servania, overall, did well. I could see his game take off with a nice upside if he can start for Dallas. This was an outstanding goal last night pic.twitter.com/xshBeNZ0Le

In addition to Servania, also from the U.S. U-20 team is Justin Rennicks who scored the game winning goal in the round of 16 against France. Rennicks is another player who it is easy to envision doing well from the tournament. He didn’t play much but a big reason for that is because he pulled his hamstring during the March international window and lacked minutes heading into the World Cup. But looking at his performances over the course of the entire cycle, Rennicks did well.


Justin Rennicks opens up his @NERevolution account with a back-post header. Can #NERevs get another one? #USOC2019 pic.twitter.com/eZkH0kX8gd


United States U-23 forward Emmanuel Sabbi is likely on the move this summer after a strong end to the season with Hobro – which he helped avoid relegation out of the Danish Superliga.

There are a lot of team’s making inquiries for Sabbi but two teams ASN has heard are interested are the usual Danish contenders Brondby and Belgium’s Anderlecht. Of course it is entirely possible he lands somewhere else but right now, those are two that we’ve heard are interested.


Everton's U.S. U-23 left back Antonee Robinson has impressed on two staight loans in the Championship - first to Bolton and then to Wigan Athletic. In both loans, Robinson was a huge asset as the clubs narrowly avoided relegation.

Right now it appears as if Wigan are going to attempt to purchase Robinson - which would be nice for him as it would give him stability. Plus Wigan appears strong enough to avoid another relegation fight next year. Everton might want to keep Robinson for the future as left backs are hard to come by but it would hardly be surprising if this move materializes.


???? Wigan Athletic have apparently made a £1.9M bid for left back Antonee Robinson. Robinson spent last season on loan at Wigan. Everton are said to be considering the offer (Source - Football Insider) pic.twitter.com/5XMtR1Vs5P


Tyler Boyd isn’t just seeing his stock soar right now with the U.S. national team after a two-goal performance in the Gold Cup opener against Guyana. But Boyd is also a hot commodity for clubs who want to buy him from Vitoria Guimaraes. Boyd went to Ankaragucu on loan from Vitoria back in January and was one of the best wingers in the second half of the Turkish season. It is not surprising that many of the clubs that want to take him on loan are among the more powerful teams in Turkey.

Fenerbache, Istanbul Basaksehir, Beskitas are just a few of the clubs with reported interest and it wouldn’t be surprising if Galatasaray jump in at some point.

If Boyd wants to stay in Turkey, he will have no problem so long as Vitoria’s asking price is reasonable. It will also be interesting if teams from outside of Turkey enter the mix as well.


Desevio Payne was one of the best U.S. players at the 2015 U-20 World Cup where he was flawless at right back. His performance against a strong Colombian team in the round of 16 was a big reason why the U.S. team made it to the quarters.

But injuries have hit Payne hard with numerous surgeries over the past few years. Those injuries forced him to leave FC Groningen and eventually sign with Excelsior – where also was kept off the field.

This week the South Carolina-born Payne signed a one-year deal with FC Emmen of the Eredivisie. The one-year deal seems as if the club wants to take a look at Payne but isn’t willing to give him a long-term deal until he proves the injuries are now behind him.

Emmen is coached by Dick Lukkien who is very familiar with Payne and who worked with Payne extensively. Lukkien was the head coach of Jong Groningen when Payne was developing at the club. He was also a first team assistant when Payne began to break through with its first team.

If Payne can stay healthy, it will be a good fit for him.


After an unsuccessful loan to Hannover, American forward Bobby Wood has returned to Hamburg. After two straight seasons of being relegated out of the Bundesliga, Wood will at least begin preseason with HSV in the 2.Bundesliga – a league where he once enjoyed a ton of success with Union Berlin back in 2015/16.


Time to ball. Alongside our new signings, Christoph #Moritz and Bobby #Wood are also training after returning from loan. ?@DavidBates_ and Stephan #Ambrosius are working individually on their comebacks ????#nurderHSV pic.twitter.com/4cWttduR0x

The problem still remains his salary. Wood is being paid a fortune by Hamburg and the 2.Bundesliga doesn’t justify his wages. It is entirely likely that HSV try to dump Wood sooner than later but the question is how? And what clubs will be willing to take him? Or how much will HSV have to contribute?


2017 U.S. U-20 World Cup starting goalkeeper Jonathan Klinsmann is on the move from Hertha Berlin to St. Gallen of the Swiss Superliga.

Moving out of Germany is probably a nice thing for Klinsmann as his father’s spotlight still shines strong in that country. But Klinsmann will be behind established number one Dejan Stojanovi? at the club. That bodes slightly better for his playing time as he wasn’t very deep on the charts at Hertha. The key for Klinsmann will be whenever he gets a chance, he will immediately have to do well.