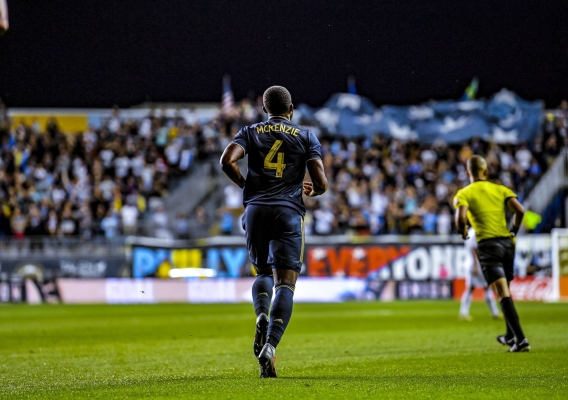 Week 29 separated the pack quite a bit in terms of the playoff race and we now know the difference between the conteders and the pretender. Also, in a new segment, we have the 5 best American players from the weekend. ASN's Brian Sciaretta breaks it down.

BY Brian Sciaretta Posted
September 16, 2019
12:00 PM
THE 2019 MLS season is in the stretch run and this weekend did its best to bring clarity into the playoff races. There are now distinctly teams that have clinched, are safe, are in a dogfight, or have no chance. It is pretty easy to tell which teams are in which categories.

There were also players stepped up and delivered big performances and there were others that didn’t live up to the opportunity. From an American perspective, this was good to see as it involved U.S. national team players as well as players from the youth national teams.

Here were some things which I took away from Week 28.


The biggest game of the weekend saw the Philadelphia Union play to a 1-1 draw against Los Angeles FC in Pennsylvania. The game was the best matchup heading into the weekend as Philadelphia was in second in the East while LAFC was running away with the West and the Supporters Shield.

In the end, the game turned out to be good, not great. Both teams failed to convert good chances which could have won it. LAFC, however, still controlled most of the game and possession. Special recognition has to go to Philadelphia’s defense and goalkeeper, Andre Blake, who came up big. Mark McKenzie had trouble starting in the beginning of the season but had the best performance of his career.

Jonathan Tannenwald said it best in this piece.


Some reading for @BrianSciaretta, @pkedit, @herculezg... and maybe Jason Kreis and Gregg Berhalter?

Mark McKenzie played his best game yet as a professional last night, in one of the biggest regular season games in Union history: https://t.co/Rw575fiLnU via @PhillyInquirer pic.twitter.com/25M6VHqsHV

For Philadelphia, Brendan Aaronson also had several big moments and nearly hit the go-ahead goal. For Aaronson, however, he was taken out shortly after the hour mark. While just 18, the next step for him will be being a dangerous player latter into the game.

What was also noteworthy of this game is that Philadelphia boss Jim Curtin suspended Marco Fabian from this game for missing a team meeting. Suspending your designated player for such a big game at home certainly takes guts but it’s the right call for Curtin.

Philadelphia has never won a playoff game in its history but it is in a good position right now. While three of its last four games are away from home, it will face the fading Red Bulls and San Jose before heading to the below average Columbus Crew.

As for LAFC, the team will win the Supporters Shield but it is winless in four. But with three of its last four at home, Carlos Vela back, and an easy schedule down the stretch, it should have plenty of time to get its momentum back.

Where does Toronto stand?


Toronto posted a 3-2 win over Colorado and it was a back and forth game that could have gone either way in Canada. Toronto had an early 2-0 lead but it was 2-2 by the 62nd minute and Colorado missed a penalty in the first half.

Watching this game, Toronto can certainly be dangerous and it can score goals. But defensively, it’s hard to see this team winning on the road in the playoffs. Right now, a lot is being made of the team’s seven game unbeaten run but that could be fools gold. Only three of the seven were wins and only one of the seven was against a team currently in the playoff positions. Toronto is bottom feeding at the moment and is only doing a decent job at it.

Of their three remaining league games, only one is against a playoff team (sandwiched between the midweek Canadian Championship against Montreal). That one real test before the playoffs comes next week away against LAFC. If they win or draw that, they will be more believable. As of now, it’s hard to say they’re a contender.

Toronto has a very consistent forward in Jozy Altidore and some great passer in the midfield in Michael Bradley and Alejandro Pozuelo. But its 49 goals conceded shows that the real hurdle right now is not scoring but keeping opponents off the scoreboard.


Things aren’t great in Red Bull land and the team fell apart yet again late in the game in a 4-2 loss to the Seattle Sounders on Sunday. Seattle got a bit lucky on a the first goal which appeared to come off Jordan Morris’ hand.

But after rallying for an equalizer at 2-2 after trailing 2-0 the Red Bulls were done in by an own goal and a very late goal from Lodeiro at the end.

Red Bulls fans are calling for Chris Armas to be fired but it’s hard to see the logic in that right now. In an era where good teams are willing to find a combination of spending on good players and developing from within, the Red Bulls have nothing. After the sale of Tyler Adams, the team failed to buy adequate replacements. The Red Bulls Academy has run dry and the big acquisition is Josh Sims, a very seldomly used player for Southampton. Meanwhile, Bradley Wright-Philips and Luis Robles are older and the rest of the core looks as if they’ve hit their limit.

More than Armas, the club’s front office needs to answer questions about the tools they are giving Armas to work with. In this league, teams need to be dynamic and always forward thinking. The Red Bulls, like Sporting Kansas City, are trying to keep a core together beyond its expiration date.


The most disappointing team of the weekend was FC Dallas which inexplicably and inexcusably lost to Chicago by a lopsided 4-0 score. On the edge of the playoffs and in a game it needed to have, Dallas was blown out. Dallas has a harder schedule the rest of the way, and Chicago should have been a winnable game.

To make the playoffs, Dallas needs some unexpected results out of a difficult final four games (@Seattle, NYCFC, @Colorado, Sporting Kansas City). It’s best out right now is San Jose which isn’t playing well and has a tough remaining schedule. But that is for nothing unless it can take care of its own problems.

As for Chicago, the team might not make the playoffs, but there is at least hope for the future. It’s tenure at Bridgeview comes to an end and new ownership will hopefully be more willing to compete with the modern era of the league.

Minnesota is cruising into the playoffs and its 3-1 win over Real Salt Lake was very lopsided. Darwin Quintero was one of the best players of the weekend with his two goals.

One of the best things about the new MLS playoff format is that the regular season matters more. Home field advantage is so critical for the best teams – Atlanta, LAFC, NYCFC, Seattle, and Minnesota. There is a very good chance that Minnesota finishes in second place right now in the West and that would allow it to play at home right through to the Western Conference final (should it face LAFC).

But Minnesota is a good spot because no one is asked to carry team every game. When it’s not Darwin Quintero, it’s Mason Toye. When it’s not Jan Gregus, Kevin Molino, or Ozzie Alonso, it’s Ethan Finlay and Hassani Dotson.

It’s not a huge gap separating Real Salt Lake and Minnnesota United but it is two teams that are much better at home. Real Salt Lake has several different offensive threats as well and has several young American players that also contribute heavily.

But Real Salt Lake has a tricky away game against New England followed by two home games against the Galaxy and Houston. The season finale is away against the awful Vancouver Whitecaps. Nine points is entirely possible out of that run, which would allow RSL to host a playoff game or two.


It’s boring and redundant to say that the Galaxy can only go as far as Zlatan takes it. That’s far from the ideal situation when a team’s hopes rest on a 38-year-old forward who treats some game more importantly than others. So deep is his hatred for the playoffs that it seems like he’s intent on missing out on them for the second straight year.

The Galaxy will certainly make the playoffs after Sunday’s laughable 7-2 win over a Sporting Kansas City team that knows a major overhaul is heading this winter. But it’s problems are eerily similar to Toronto FC in that it just doesn’t have the defense needed to win a playoff game – especially on the road. A home playoff game is far from assured for the Galaxy.


5 Americans on rise this Weekend


Jordan Morris: Jordan Morris was terrific in Seattle’s win over the Red Bulls and Morris was also sharp with the U.S. team over the window and with Seattle before the window. People forget he missed all of last season with an injury and only now is starting to hit his stride again. His one goal was fortunate but his assist on the header was terrific against Red Bulls.

Sean Johnson: The NYCFC goalkeeper is making a great case that he should be the U.S. national team backup. After an incredible save on a penalty from Pozuelo against Toronto midweek, Johnson was on his game yet again in a 2-1 win over San Jose. He’s clearly been the difference for the Eastern leaders.

Mark McKenzie: The Philadelphia Union centerback and 2019 U.S. U-20 World Cup captain had the best performance of his career in the 1-1 draw against LAFC. He blocked two big shots late and was generally a force inside the box to help contain a very good LAFC team.

Sebastian Lletget: The U.S. international was in fine form on Sunday with two goals for the Galaxy in a 7-2 win. While Zlatan will suck all the oxygen out of the room, Lletget’s performance shouldn’t go unnoticed. This was perhaps his best game of the season.

Sebastian Lletget gets in on the action with his first goal since March. #LAvSKC pic.twitter.com/xP0FagXblZ


Keaton Parks: The NYCFC midfielder was a difference maker in the 2-1 win over San Jose on Saturday and his goal was one of the better ones scored this weekend. He is steadily improving throughout the season and its peaking at the right time as the playoffs approach. Defense is always the issue for him but he is showing better in that area of the field as well.