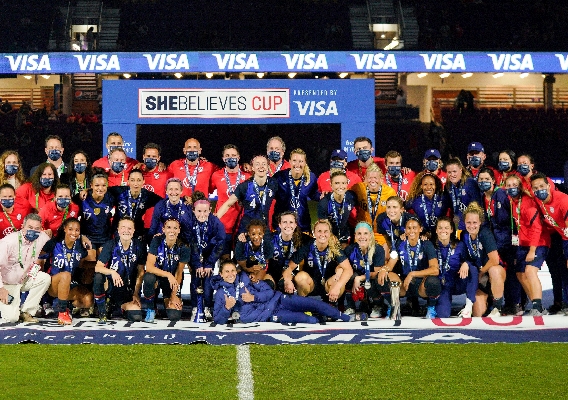 With the Olympics hopefully fast approaching, the USWNT routed Argentina in impressive fashion to win their fourth SheBelieves Cup Wednesday night in Orlando. ASN's John Halloran looks at the game and breaks down the performance.
BY John Halloran Posted
February 24, 2021
11:05 PM

THE UNITED STATES women’s national team won their fourth SheBelieves Cup on Wednesday night, defeating Argentina 6-0 in the final match of the tournament in Orlando.

Early in the contest, the Americans raced out to a lead, putting up four goals by halftime on the back of two tallies from Megan Rapinoe and strikes from Carli Lloyd and Kristie Mewis. In the second stanza, Alex Morgan and Christen Press added their own to produce the final scoreline.

Another game, another goal for Megan Rapinoe ????

With this goal against Argentina, Rapinoe has now scored against 27 different opponents for the USWNT ????????pic.twitter.com/Hl5E9TWbXB

With wins over Canada and Brazil already secured in the first two matches of the SheBelieves Cup, Andonovski took time to look a little deeper at his roster against Argentina and much of the talk once the U.S. had secured the result was about who might be in—or out—of the coach’s 18-player Olympic roster.

Despite her heroic performance two years ago at the World Cup in France, many have speculated that Rapinoe might be a potential cut for the Tokyo Games, as crazy as that might sound. Rapinoe spent the fall of 2019 mostly injured, then elected not to participate in any of her club’s matches in 2020 due to the COVID-19 pandemic.

At 35 years old, discussions of her age have also begun as some have wondered whether or not Rapinoe can still provide the Americans with enough attacking punch to justify a place on the Olympic roster. And while her service and flair still remain nearly incomparable, the Olympic tournament is a notorious grind with matches coming every three days over a tight two-week schedule. It remains unknown whether the winger’s fitness is up to the challenge, especially considering Andonovski’s desire to play a high-press most of the game. 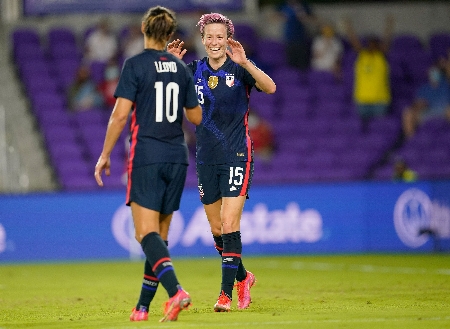 In 2016, then-head coach Jill Ellis gambled and brought a half-healthy Rapinoe to the games in Brazil—a decision that backfired when the team ended up using two substitutes in their quarterfinal loss to Sweden, subbing her in and then out of a game that became a 120-minute extra-time marathon.

Through much of her career, Rapinoe hasn’t been known for a vigorous pursuit of her defensive tracking responsibilities, a quality that often leaves left back Crystal Dunn on an island defending many situations 1 v. 2 in the U.S.' current set-up. However, Ellis' transition to a 4-3-3 back in 2017 was, in part, meant to do just that, emphasizing what the attacker could add to the scoreline and largely absolving her of playing in the defensive half of the field for the Americans.

Now, as the team moves on from the SheBelieves Cup, it’s fair to say that speculation of a Rapinoe cut will fade for the time being as she finished the tournament with three goals, and even provided the “hockey assist” with a deft flick on the sequence that set-up Mewis’ tally on Wednesday evening. 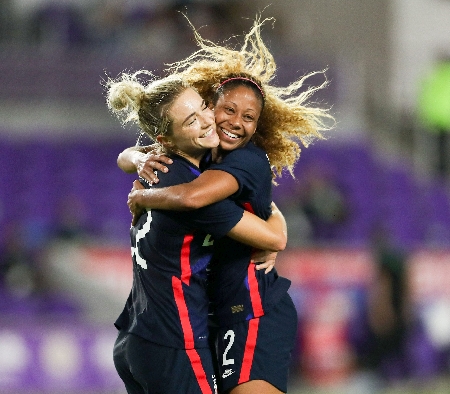 The other big insight into Andonovski’s thinking during this tournament was at outside back. With O’Hara missing most of the tournament through injury, the coach elected to use Emily Sonnett as his primary backup, starting her against Brazil and bringing her on for O’Hara only 30 minutes into the match against Argentina (a planned substitution).

And while Krueger started the match on Wednesday, her call-up to this camp at all was a surprise. She hadn’t been part of the squad for nearly a year and only came in for the SheBelieves Cup after Paris Saint-Germain refused to release Alana Cook.

However, Krueger played well in her half against La Albiceleste, getting forward well, assisting on Mewis’ goal, and setting up at least four other potential goal-scoring sequences.

Nonetheless, Sonnett has seemed to keep her spot as Andonovski’s preferred backup during this tournament. She got most of the opportunities during O'Hara's absence, ahead of Midge Purce, Krueger, and Ali Krieger—who didn't even make the roster. Meanwhile, Sonnett struggled through much of the tournament, continuing to look less than completely comfortable in the outside role, and putting in a rather awful shift against Brazil in the second match of the tournament.