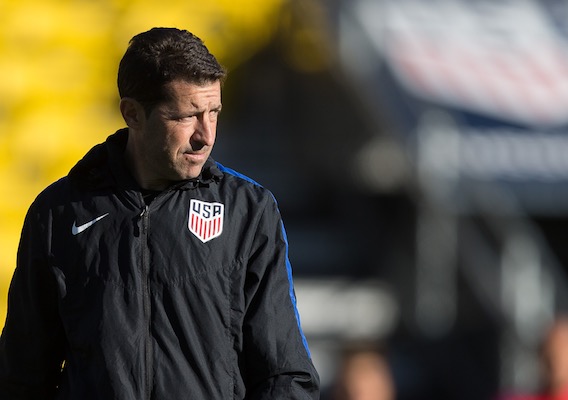 ON SUNDAY United States U-20 national team head coach Tab Ramos announced a 24-man roster for the first camp of 2017. It's a crucial period for the squad—World Cup qualifying begins on February 18—and this roster offers a strong picture of the team’s core group.

Based on how Ramos has managed teams in his two previous cycles, most of the 20-player World Cup qualifying team will come from this group. Ramos said that he has a player pool of about 35 players so unless a domestic player is injured it's hard to see him being in the World Cup qualifying plans and not being on this roster. The remaining 11 players are most likely based abroad.

Of course, Ramos is somewhat limited in his use of players abroad since clubs are never required to release players for youth national teams. With World Cup qualifying coming occuring during the European club season, an eligible player like Christian Pulisic has zero chance of being released. A player based abroad who is not receiving first-team minutes, however, could very well be released.

Here is the roster followed by my thoughts on both this camp and where the team is heading.

One of the biggest battles on this team will occur in central defense, which is six-deep among players that have a legitimate shot. Cameron Carter-Vickers is one of the six and likely the best of the bunch but his availability for qualifying is questionable. He played for the U-20 team at a camp in the fall although that came during a FIFA window. He is only playing for Tottenham for cup games but the club recently lost starting centerback Jan Vertonghen due to what appears to be a serious ankle injury. As a result, now it would appear Tottenham would probably not let Carter-Vickers go to qualifying although he likely would be a strong candidate for the World Cup.

Even without Carter-Vickers the central defense pool needs to be sorted out for qualifying. Right now Tommy Redding, Erik Palmer-Brown, Justen Glad, Miles Robinson, and Auston Trusty are candidates. Palmer-Brown is coming off a nice loan to Porto where he helped Porto B win the Segunda Liga. Redding has been a mainstay this cycle and has worn the armband at times. Glad made 28 starts in 2016 and saw 2,514 minutes of MLS action. Robinson was the second overall pick in the MLS draft and Trusty, a Philadelphia Union homegrown product, has been a regular with the team in 2016.

So the competition is tight and one will have to be cut for qualifying and two will likely be cut for the World Cup if the team qualifies and Carter-Vickers rejoins. The fact that all five are in camp suggest that Ramos is probably uncertain right now who is likely to get cut but this camp will likely determine who goes.

The U-20 cycle is often a little chaotic as some players fade over the course of a cycle while others rise late to take key roles. This is to be expected because it is a critical age for player development and athletes start to come into their own during this time. Players who were early bloomers are also overtaken during this window. Case in point: Romain Gall, Junior Flores, and Zach Pfeffer all started off the cycle as key players but failed to make the 2015 U-20 World Cup team.

On the flip side, Carter-Vickers came into the team shortly before qualifying and established himself as one of its stars.

One player to watch in this squad is Red Bulls central midfielder Tyler Adams who seems like he could be coming on late to claim a spot on the team after appearing in December’s camp in Florida.

Adams, 17, is highly rated by U.S. Soccer but he is still very young and likely to be a key part of the 2019 U-20 team. He might be in a position now to play up a cycle and be part of the 2017 team as well. Adams quietly had a nice year in 2016 where he made first-team appearances for the Red Bulls who were busy with Champions League and U.S. Open Cup games while also helping Red Bulls II to the USL Championship.

With a good camp, he could be on the qualifying team next month.

Forward Josh Sargent is one such player, a U-17 squad member who is also making an appearance in this U-20 camp. Rules do not allow a player to compete in both the U-17 and U-20 World Cups in one year so it is very likely that this camp is just introducing Sargent to the U-20 setup without taking him away from the U-17 team.

Either way, it is a great vote of confidence for the Missouri native. Sporting Kansas City is pursuing him as a homegrown signing, and it's easy to see why.

There are a number of European-based players not on this roster who could be added, and others who probably will not be part of qualifying.

First of all, it is fairly safe to eliminate players who are part of their clubs' first team as most franchises will not want to release them. This includes Christian Pulisic (Borussia Dortmund), Joshua Perez (Fiorentina), and Cameron Carter-Vickers (Tottenham). Then there is Mukwelle Akale who is not part of Villarreal’s first team but that club has been reluctant to release him for many camps (as is their right).

On the flip side, Gedion Zelalem is not in Arsenal’s first team at the moment and unless management rates its U-23 team as crucial, the London-based club might see the value of letting Zelalem play important international games.

Nicholas Taitague made his U.S. U-20 debut in the December camp playing up an age group (he is eligible for the 2019 U-20 team as well). The uber-talented youngster is set to officially join Schalke in February when he turns 18 but the U.S. U-20 team can offer him the sort of meaningful games that will be hard to come by until next season.

What do you think of Ramos' roster, and Brian's predicted team for qualifying? Any other names you'd like to see included? Share your take below.