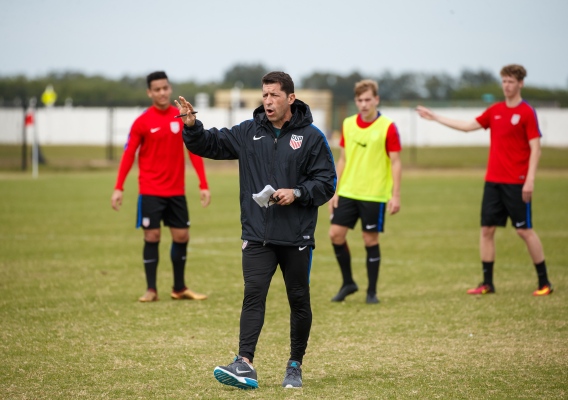 Tab Ramos added some impressive firepower to his U-20 World Cup qualifying team on Saturday night as Chris Richards, Sebastian Soto, and Sergino Dest were added to the roster for the second stage. Brian Sciaretta with more.
BY Brian Sciaretta Posted
November 11, 2018
7:00 AM
UNITED STATES U-20 head coach Tab Ramos unveiled three changes to his World Cup qualifying roster on Saturday night. The six teams that advanced to the tournament’s second stage were permitted to make up to six changes to their roster. Ramos elected to use half of the allowable changes to complete his roster for the remainder of the tournament.

The most significant addition to the roster is Richards who shores up the team’s central defense – a position that does not have much depth. Now with Mark McKenzie also on the team, Ramos will have his top two central defenders on the team.

Sergino Dest was a veteran of the U.S. U-17 World Cup team in 2017 and is now moving up to the U-20 level. The Dutch-American gives Ramos a versatile wide player, which is also not a deep position on the roster. Dest has currently moved from the youth levels at Ajax to the reserve team this season.

Sebastian Soto will also provide another forward option for Ramos. Soto, 18, recently signed for Hannover after developing at the Real Salt Lake academy where he was the top scorer in U.S. Soccer’s Development Academy in 2017/18. Since moving to Germany, he has been one of the leading scorers in his region of the U-19 Bundesliga.

There are a variety of reasons why Ramos did not use all of his six allowable changes. The current team has been together for over two weeks and keeping as much of that unit together for cohesive purposes is valuable.

Some of the key players of this U-20 age group are with the senior team in Josh Sargent, Tim Weah, and Tyler Adams. Injuries prevented others from participating in Richard Ledezma and Nick Taitague. Some players like Jonathan Amon were not released by their clubs.

There are some obvious surprises. Chris Durkin is perhaps the most eye-opening after playing over 1500 minutes this season for DC United and captaining the 2017 U-17 World Cup team. With DC United’s playoff ouster last week, Durkin was available.

The U.S. U-20 team is now in a three team group with Costa Rica and Honduras. The top two teams from the group qualify for the 2019 U-20 Word Cup in Poland and the winner advances to the CONCACAF final. The U.S. team will take on Costa Rica on Friday, November 16 and Honduras on Monday, November 19 in Bradenton

No matter what, the U.S. U-20 team should have enough firepower to qualify for the World Cup next year and compete to win the tournament. Should it be successful, there will be plenty of competition in the months ahead to make the 21 player roster for the U-20 World Cup which begins in late May.