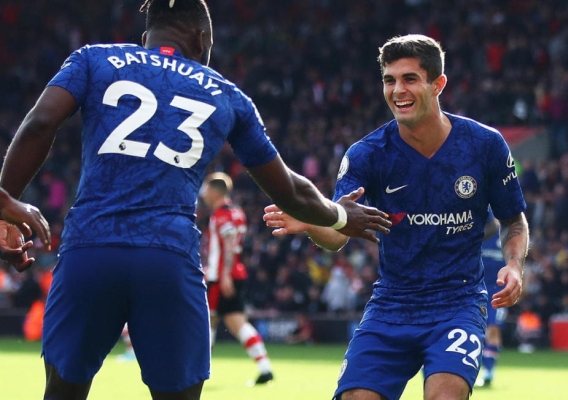 Pullassist, Yedlin big vs. Man U but overall a lackluster weekend for Americans abroad

Christian Pulisic made the most of his 10 minutes and DeAndre Yedlin had his best game for Newcastle in a long time. Aside from that, there were few real highlights this weekend for Americans abroad. ASN's Brian Sciaretta walks you through it.
BY Brian Sciaretta Posted
October 07, 2019
6:00 AM
THE WEEKEND FOR Americans abroad began with a very uneventful Saturday where no players really stood out. It wasn’t until Sunday when things began to pick up steam as Christian Pulisic notched a key assist for Chelsea and DeAndre Yedlin was part of a huge win for Newcastle at St. James Park

On the grand scale of things, there were more negatives than positives this weekend among the Americans abroad contingent than positives, but overall the positives allowed fans to feel good about the progress of a few key players heading into the international window.

For starters, very few Americans earned starts in impressive results for their clubs. Aside from Yedlin, most of the best performances came from players off the bench – including Pulisic with his assist.


Christian Pulisic came off the bench for Chelsea and played the final 10 minutes in Chelsea’s 4-1 win over Southampton. The game was 3-1 when he entered and he it a very impressive assist in the 89th when his pass played Michy Batshuayi, his former Borussia Dortmund teammate, into a dangerous area for a goal.

This was an important moment for Pulisic. His leash is not long at a club like Chelsea. Expectations are always high for him to produce. When he was given just 10 minutes to perform, he made something happen. Not only does that give Pulisic confidence heading into the international window and with Chelsea in the games later in the month, it also gives Frank Lampard confidence in playing Pulisic.

It has been a very long time since DeAndre Yedlin had a big time performance at the club level but Yedlin did just that on Sunday. The Seattle native earned a surprise start for Newcastle against Manchester United and helped his club walk away with a 1-0 win. Those three points against a struggling United team moved it out of the relegation zone.

Yedlin, 26, was really solid on the defensive side and was rarely beaten. Offensively, he had a few moments where he got forward but generally was looking to help keep the clean sheet defensively. Overall, it was a very solid outing.

The good news for Yedlin is that his performance was so strong that it will likely keep him in the team’s starting lineup as new manager Steve Bruce is unlikely going to want to change a lineup that delivered such an important win.

Weston McKennie played the second half for Schalke in what was overall a lackluster draw against an opponent it should beat in 1.FC Koln. That being said, it was not a bad performance from McKennie at all. He completed over 90% of his passes and two of his passes resulted in shots. Defensively, he had three tackles.

It wasn’t a performance that will be remembered for very long, but it should give him momentum heading into the international window and give David Wagner plenty to think bout in the weeks ahead about the importance of starting McKennie.

As has been repeated ad nauseum, McKennie simply needs to find one position where he can play regularly. But when he can see more of the ball, he can be quite useful on a very strong team.


Josh Sargent, 19, earned his third straight start for Werder Bremen which played to a 2-2 road draw against Eintracht Frankfurt. The St. Louis native went 71 minutes and was overall decent. His hold up play played a role in the team’s opening goal – which came off a frantic play in the box.

Sargent continues to have an important presence in the box and is continuing to develop as an offensive threat. Two important consecutive away draws where Bremen has scored four goals will likely keep him in the starting lineup.

With Jozy Altidore coming out of Toronto’s game on Sunday with an injury, there could be a big opportunity for Sargent this window.

Alvarado to the top of the table


Necaxa, and its American captain Ventura Alvarado, defeated Morelia away 3-2 on Friday night to move into first place in Liga MX, for now. Necaxa has played one more game than second place Santos Laguna, which is one point behind.

Alvarado has had a great year for Necaxa and he is trying to add his second Liga MX title to his resume. The list of American players which as won Liga MX over the past decade is impressive: Alvarado, Joe Corona, Greg Garza, Jose Torres, Herculez Gomez, Omar Gonzalez and Jorge Villafana. Jonathan Bornstein was close when he played in a Liga MX final for Queretaro.

What will it take for Alvarado to earn another look with the U.S. team. He last played for the United States during the 2-1 Gold Cup semifinal loss to Jamaica in 2015. Generally, he struggled in his 13 caps for the U.S. team.
A lot will have to do with the team’s other central defenders: John Brooks, Matt Miazga, Aaron Long, Walker Zimmerman, Miles Robinson, and Omar Gonzalez. That appears to be the pecking order right now and after that, there are U-23 options such as Cameron Carter-Vickers, Justen Glad, Auston Trusty, Mark McKenize, and Erik Palmer-Brown.

There is room for Alvarado but it is hard to see him getting his first call-up after such a long absence in anything other than a friendly. The national team’s next round of friendlies are in March. After that, it starts getting very close to the Hexagonal round of World Cup qualifying – which will start in September.

It is possible Alvarado can sneak in there but the window is very narrow. If he’s not in by March, it’ll be extremely hard. That being said, the ongoing injuries to Brooks certainly don’t help.

While it is good news that Cameron Carter-Vickers and Stoke City found a way to earn three points in a 2-1 away win over Swansea, it was still just the club’s first win of the season and it remains in last place in the Championship. The international window comes at a very bad time for Stoke because it will essentially eliminate the momentum from this win.

It’s easy and somewhat justifiable to not have been thinking much about Carter-Vickers this season but this was a very good performance. If Stoke wants to survive this season, it needs more outings like this from their American defender.

Despite all of the above, it wasn’t a great weekend for Americans abroad. Aside from the usual suspects, there was a lot of disappointment.

For one, USMNT starters RB Leipzig’s Tyler Adams and Wolfsburg’s Jonathan Brooks continue to miss time in the Bundesliga with injuries.

Also in the Bundesliga, Fortuna Dusseldorf lost again – this time a 3-1 away loss to Hertha BSC. Alfredo Morales returned from injury and played the final 19 minutes. Steffen did not make a save and Hertha scored on all three of its shots on target. Fortuna now sits on the edge of the relegation zone.

In the 2.Bundesliga, Sebastian Soto did not play for Hannover in a 2-0 away win over Dynamo Dresden. Bobby Wood did not play for league-leading Hamburg in a 2-0 win over Greuther Further. American attacker Julian Green started for Furth in that game and struggled in his 79 minutes.

Also in the 2.Bundesliga, Jann George (who was called up once to the U.S. U-23 team in 2011) scored for Jahn Regensburg in a 2-1 win over Holstein Kiel although his goal was an cross that accidentally snuck into the goal.

In Argentina, it was a disappointment. In what could have been the first Primera match to feature two Americans playing against each other, U.S. U-20 mid Matko Miljevic did not get off the bench for Argentinos Juniors and Joel Sonora did not make the 18 for Arsenal de Sarandi as Argentinos came away with a 2-1. Meanwhile, Alan Sonora did not make the 18 for Independiente.

In Holland, Haji Wright continues to get playing time for VVV-Venlo but is yet to register either a goal or an assist. With Schalke reportedly is helping to pay his salary to meet the Eredivisie minimum for non-EU citizens. But after this year, where will Wright end up?

Also in the Eredivisie, Sergino Dest continues to start and play well for Ajax although that is hardly exciting for American fans until his international commitment is solidified.

The Danish Superliga was uneventful as both Emmanuel Sabbi and Christian Cappis were suspended for Hobro’s 2-0 loss to Aalborg. Jonathan Amon is still out of action for Nordsjaelland.

In Belgium, goalkeeper Ethan Horvath continues to sit behind Simon Mignolet at Club Brugge. Chris Durkin didn’t get off the bench for St. Truiden in a 4-0 loss to Kortrijk – but Brendan Hines-Ike started and played 83 minutes in the win.

In Austria, Erik Palmer-Brown only played the first half for Austria Vienna in a 1-0 win over Sturm Graz. Jesse Marsch’s Red Bull Salzburg is still on auto pilot in the Austrian Bundesliga and over the weekend it cruised to a 6-0 win over Altach.

In Italy, Andrija Novakovich started and played 73 minutes for Frosinone in a 1-1 road draw with Salernitana. The Wisconsin native is still looking for his first goal in Serie B for the 15th place team.

In the Championship, it was also mostly disappointing. Matt Miazga started for Reading which lost 1-0 to Bristol and is now in the relegation zone. Antonee Robinson started for Wigan in a 1-0 loss to Sheffield Wednesday and remains in 19th place. Eric Lichaj also got a start for Hull City (as is usual since he’s the captain) in a 3-0 loss to Huddersfield. Tim Ream started for Fulham in a disappointing 2-2 draw at home to Charlton Athletic. Derby County defeated Luton Town 2-0 but Duane Holmes only played the final 6 minutes.

The one American in addition to Cameron Carter-Vickers who had a strong showing over the weekend was Geoff Cameron who went the distance in defensive midfield for Queens Park Rangers in a 4-2 win over Blackburn.

The reports from the top youth levels were generally mixed. Richard Ledezma went a full 90 for Jong PSV in a 3-1 win over Volendam. For Jong Ajax, Josh Pynadath and Alex Mendez both came off the bench in a 6-0 win over FC Eindhoven. All the goals were scored when both Americans entered the game.

In Germany's 3.Liga, Chris Richards went a full 90 for Bayern Munich II at right back in a 2-0 win over Eintracht Braunschweig.