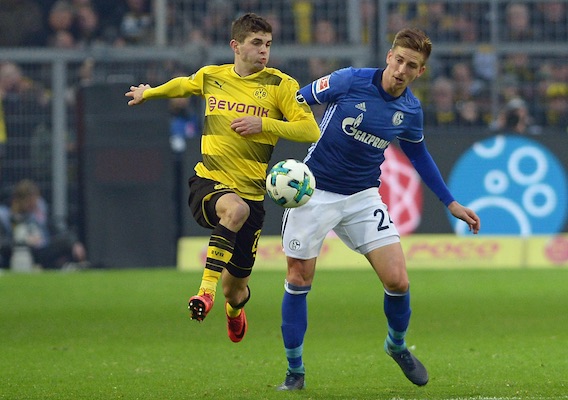 Two prominent Yanks squared off this past weekend, and the more experienced 19-year-old prevailed over his counterpart and friend. Brian Sciaretta shares the latest updates on Yanks playing abroad.
BY Brian Sciaretta Posted
November 27, 2017
1:00 PM

THE BIG STORY coming into the weekend was Christian Pulisic and Weston Mckennie facing off against each other for the first time in the Bundesliga. While it was an entertaining game, it was also revealing that talented players like McKennie will hit bumps along the way as they develop. But McKennie was not the only young American abroad who has had a rough time.

Most of the past month has had no shortage of good news for Americans abroad, especially for the younger players. This weekend, however, had a different tune. Some players have continued to play well but others had shaky performances. That is going to happen with any player but the next few games will be revealing to see how they respond.

Here are my five thoughts from the weekend.

There is no question that Saturday’s game between Schalke and Borussia Dortmund was an exciting occasion for American fans as two national team teenagers were in the starting lineup. In the first half, Pulisic was sharp and helped set up the first goal. On the other hand, it was a rough game for McKennie who struggled early and was pulled before halftime after struggling to get anything going offensively or helping in possession.

The Texan had played against other top German teams like Bayern Munich, but he had been gradually getting more responsibility on the field. After he was removed, Schalke made a stunning comeback from 4-0 down to tie the game 4-4. Moving forward will McKennie remain in the starting lineup or will he have to earn that spot back?

The same could be said for Shaq Moore, 21, who has looked effective for Levante in his first few appearances but was given the start at right back against a powerful Atletico Madrid. Moore was decent early but was gradually overwhelmed, like the rest of his teammates, en route to a 5-0 defeat.

Then there was Antonee Robinson, 20, who has been earning rave reviews since taking over the starting left back position at Bolton in the Championship (where he is on loan from Everton). On Saturday, Robinson was probably the best player on Bolton—which isn’t saying much as everyone was poor in a 5-1 loss to Wolverhampton.

On the other hand, Cameron Carter-Vickers looks like he could be fighting through a rough patch with Sheffield United. During the midweek he had a nightmare in a 5-4 loss to Fulham where he gifted away a goal and generally looked unsteady. Instead of being benched, Carter-Vickers was named to the starting lineup on Saturday against Birmingham City. While he was taken out in the 68th minute with United down 1-0, Carter-Vickers was noticeably improved and United fought back for a 1-1 draw.

It was never going to be a smooth ride for all of these young players. But if they can battle through these rough patches, they will be mentally stronger and better overall players.

Last week was not a good one for Matt Miazga and Vitesse which lost to Groningen 4-1. But after a 1-1 draw with Lazio in Rome in the Europa league, things started to trend upward. This past weekend, however, couldn’t have been any better as Miazga netted the game-winning goal and was part of a backline that helped keep a clean sheet in a 2-0 win over ADO Den Haag on Sunday.

Miazga, 22, is in a golden position to build a case to be a starting central defender for the United States national team, regardless of who the coach will be. Assuming John Brooks is a set starter, none of the other candidates have a resume as strong as Miazga. Sunday was just another strong performance in what has been a very good 2017 for the New Jersey native.

One of the best performances by an American in Europe surprisingly came from Terrence Boyd, 26, who scored a pair of goals for Darmstadt in a 3-3 road draw against Union Berlin. After struggling with injuries for years and then only slowly getting involved in the first team at Darmstadt, Boyd turned in one of his best games in years.

Boyd scored his first goal in the 51st minute to even the score at 1-1.

Then he scored again in the 61st minute to once again equalize at 2-2.

From a national team perspective, the depth pool at forward is thin and players are either older (Clint Dempsey), of injury concern (Bobby Wood), or unproven (CJ Sapong, Jordan Morris, Josh Sargent). Boyd will be 31 in 2022 but there is a lot of important games between now and then. Boyd can certainly be in the mix to serve a role.

Quietly and under the radar, American teenager Jonathan Amon, 18, is impressing in Denmark. After a few solid substitute appearances, the South Carolina native earned his first professional start for FC Nordsjaelland on Sunday at left wing against AC Horsens.

In the 55th minute, Amon scored his first career goal in what was a 6-0 rout. It was an impressive move as he cut inside to receive a through ball that put him past Horsens defense. He fought off the defenders from behind to fire home a low shot.

With the win, Nordsjaelland remained in third place in the Danish Superliga.

Jonathan Gonzalez, 18, is one step closer to completing a dream first season as a professional. First he broke into the club’s starting lineup and helped lead them to first place in the regular season. Now the Californian has helped put Monterrey into the semifinals of the Liga MX playoffs after a 4-1 win (6-2 on aggregate) over Atlas on Sunday night.

Gonzalez had two of his best games of the season in this series where he played a full 180 minutes. He was constantly on the ball and has now become a focal point of the possession game. In his first few months he excelled at ball-winning and forcing turnovers. Now he seems to be taking his game to another level.

A good indication was in the first leg when he sent a nice looping ball into the box as part of the build-up to the second goal which was scored by Rogelio Funes Mori.