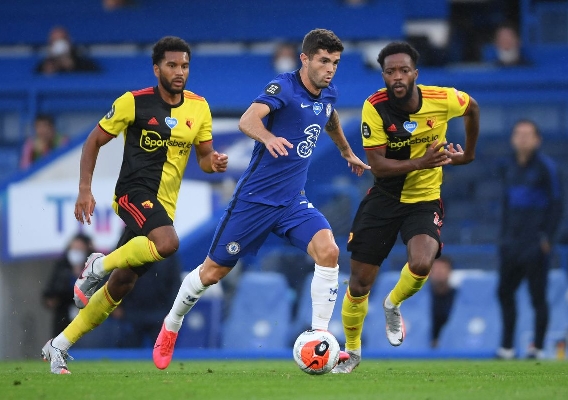 Christian Pulisic was a star coming into this season and his stock is continues to soar. Meanwhile, Sabbi ended his scoring drought in style while Jesse Marsch was named the manager of the season in Austria. Meanwhile, Wigan's financial scandal could force Antonee Robinson to be sold soon. ASN's Brian Sciaretta walks you through the ups and the downs of the weekend.
BY Brian Sciaretta Posted
July 06, 2020
7:30 AM

THE END OF THE season in Germany has made the weekend recaps a lot shorter given the abundance of Yanks in the top two tiers of that country. For now, we’re left with mostly players in the Championship as well as important games from Christian Pulisic and Josh Sargent.

Fortunately, there is still a lot to talk about now and hopefully the MLS tournament in Orlando moves forward to avoid another grinding stop for American soccer.

With that, here were the top American soccer stories abroad from the holiday weekend.

When Christian Pulisic packed his bags last year to move from Germany to London, there was a lot of guessing as to how he would do. Dortmund was a very high level, but not quite a “super club” in the manner of Chelsea.

Flash forward a year later, the season is unexpectedly still going and Pulisic has arguably been the best player on Chelsea since the restart. He’s playing extremely well on a consistent basis. Every game he is making something happen.

On Saturday, Chelsea defeated Watford 3-0 and Pulisic was dangerous throughout – drawing the a penalty for the second goal. Consider this run of Premier League games since the restart.

But it is not just limited to these individual moments. Pulisic has been dangerous the entire time he has been on the field in all of these games.

The bottom line is that if you were to go back a year and reread everyone’s expectations for Pulsiic, he is exceeding even the most lofty projections. It’s remarkable.

Emmanuel Sabbi scored a goalazzo on Sunday for Hobro in a 3-2 loss to Randers. The game essentially was meaningless for Hobro as it was already predetermined before the game that it will finish in third place and will be forced to go into the relegation playoff.

The highlight meanwhile was Sabbi’s goal in the 24th minute which cut Rander’s lead to 2-1. It was Sabbi’s seventh goal of the Superliga season but his first strike since November (a 12-game scoreless run).

The goal features a combination of superb skill from Sabbi and questionable defending from Randers. But it is still remarkably fun to watch.

U.S U-23 winger Emmanuel Sabbi’s goal for Hobro today vs Randers was a wonderful combination of skill and optional defending. But it was fun to watch #USMNT pic.twitter.com/Wrc1eLDO90

For Sabbi, he is trying to do his best to help Hobro avoid relegation despite the fact he won’t be on the team next year. The Italian-born Sabbi will moving within Denmark next year to join an OB team that is trying to qualify for the Europa League.

Sabbi’s teammate on both Hobro and the U.S. U-23 team, Christian Cappis, played 60 minutes (the same minutes as Sabbi) and left with Hobro trailing 2-1. Cappis could also be on the move this summer although the transfer market is very unstable due to COVID.

Marsch wins coach of the season

In his first season as a head coach in Europe, Jesse Marsch helped guide his Red Bull Salzburg team to silverware where it won the double in convincing fashion. In May, Salzburg won the Austrian Cup with a 5-0 scoreline in the final. Last week, Salzburg secured the Austrian Bundesliga title with a 3-0 win over Hartberg.

On Sunday, Marsch’s Salzburg team put the exclamation point on its season with a 3-0 win over LASK.

"It was great that we showed our mentality to the very last minute today," Marsch said. "We wanted to finish with the best defensive and attacking figures in the league. We managed that today."

What was most impressive about Salzburg is how it adjusted this season to the loss of three of its best players in Earling Haaland to Borussia Dortmund, Takumi Minamino to Liverpool, and central defender Marin Pongracic to VfL Wolfsburg. Prior to their departures Haaland contributed 16 goals over 983 minutes and Minamino notched 5 goals in 910 minutes.

So how did Salzburg adjust, down the stretch it was helped by contributions from everyone. Consider the team’s last six games:

So when one of the most promising forwards on the teams leaves, Marsch’s team responds by having a system where anyone can score. It’s a remarkable turnaround where one player can dominate but a huge number of players can contribute. That’s not easy to defend.

The result is that Marsch was unsurprisingly named the Austrian Bundesliga manager or the season. It’s been a groundbreaking season for Marsch who had his team not just dominate but dominate in different ways, win a double, and manage elite level talent. He might return to Salzburg but he’ll be on the move higher up the chain sooner or later.

A week ago, things were looking great for Wigan Athletic after it defeated Stoke City 3-0 to give it six wins and a draw in its last seven games. Once in a relegation battle, Wigan was comfortably in midtable. Meanwhile American left back Antonee Robinson was named to the Championship Team of the Week for the first two rounds after the restart (followed by Team of the Month honors).

In one week, it all came crashing down. Last week, the team went into administration and reports surfaced of murky ownership support when Hong Kong-based owner Au Yeung withdrew his support (and Yeung has never attended a game). Last week, Wigan’s staff was apparently not paid.

One such solution could be that Wigan be allowed to sell players before the opening of the transfer window. This would allow the club to continue, albeit a 12-point penalty is still very likely.

Robinson, 22, is almost certainly going to be sold. AC Milan might not be a destination any more but Robinson has done so well that there is certainly a long list of suitors.

With all the turmoil, it is unsurprising that Wigan were soundly beaten by third place Brentford on Saturday 3-0 with team moral likely at a low point.

Moore flying under the radar

Shaq Moore, 23, is an American player who hasn’t been on the minds of supporters here in the United States but the Georgia native has been thriving since the restart in the second tier of Spain with CD Tenerife.

On Saturday, Tenerife downed 4th place Almería 2-1 away to move into seventh place – just two points out of sixth place and the promotional playoffs. There are four matches left in the season and next up for Tenerife is third place Real Zaragoza.

Tenerife has been playing extremely well lately with four wins and two draws over its last six. Moore has been a big part of that and it has seen him playing further up the field at right wing as opposed to his usual right back.

Moore has been terrific in recent games and it was his cross late in the game which helped result in a stoppage time winner for Tennerife over Almeria.

It’s promising that Indiana Vassilev has been making the bench regularly recently for Aston Villa and the U.S. U-20 attacking midfielder certainly has the advantage of the temporary five sub limit. On Saturday, the Georgia native played the final five minutes in a 2-0 loss to recently crowned champs Liverpool. It was 1-0 when he came on so Vassilev was put into the game when a loss was not a foregone conclusion. Villa is still one point deep in the relegation zone.

Bayern Munich II won the 3.Liga over the weekend despite a 1-0 loss to Kaiserslautern. With FC Würzburger Kickers failing to defeat Terrence Boyd and Hallescher (2-2 draw), Bayern Munich II was crowned champs of the third tier. Bayern II cannot be promoted due to German rules mandating a division separate first and second teams but it is still a terrific accomplishment that showcases the club’s depth. U.S. U-23 central defender Chris Richards went the distance for Bayern II in this one and it sets the stage for next season. Will he try to fight for first team minutes at the powerful club? Will he go on loan? Will he play another season with Bayern II?

While it wasn’t at the level of the success of Jesse Marsch or Pellegrino Matarazzo, fellow American manager Joe Enochs helped small FSV Zwickau to avoid relegation out of the 3.Liga. A recent surge which featured two wins followed by a 0-0 draw with SV Waldhof Mannheim on the final matchday on Saturday was enough to seal survival for Zwickau – by the slimmest margin of just one goal in the goal differential tiebreaker.

Duane Holmes is still searching for the form he had before his injury in December, January, and early February. The Georgia native played 66 minutes on Saturday for Derby County in a 1-1 draw with third place Nottingham Forest. Derby trailed 1-0 when Holmes left but the club rallied for a draw with a thrilling equalizer in the seventh minute of stoppage of time. Holmes will still have huge games ahead as Derby is in seventh place and is just three points out of sixth place the promotional playoff positions with five games remaining.

United States national team defender Tim Ream and Fulham had a very important 1-0 win over Birmingham City. The winning goal from Joshua Onomah came in the fifth minute of second half stoppage time. The three points gave it six points from its last two after two straight losses after the restart. Fulham moved into fourth place in the Championship

While Luton Town had been improving steadily since the arrival of American central defender Cameron Carter-Vickers, it was dealt a lopsided 5-0 loss by Reading on Saturday. Entering into the game, the club had three wins, four draws, and two losses since Carter-Vickers joined on loan from Tottenham. The club was still in last place but was within five points of safety. This loss did not alter the standings as Luton remained in last and five points behind Hull City. Its survival chances are bleak and its -32 goal differential is the worst in the league by 11 goals.