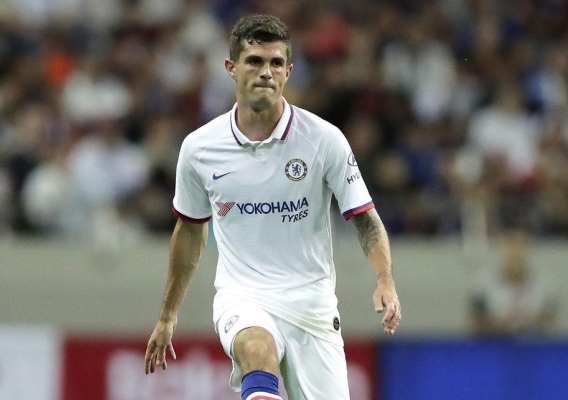 The European season is firmly underway this weekend with the Premier League and the German Cup starting. Domestically, LAFC and RBNY highlight an important weekend in the playoff races. Here is your weekly weekend preview from Brian Sciaretta with his top 10 games for American fans to watch.
BY Brian Sciaretta Posted
August 09, 2019
3:00 PM
IN EUROPE, this weekend marks the first major weekend of the new season in many countries as the Premier League returns and Bundesliga clubs return in the German Cup. In MLS, the playoff push is underway.

Of course there are bunch of games we don’t have on our weekly top 10 because so much is unclear at this moment. Does Sergino Dest have a realistic chance of getting off the bench for Ajax? We won’t know until he actually does. Also, the BBC said there is a chance that U.S. national team midfielder Duane Holmes might return from injury this weekend. Time will tell if that is accurate.

But with that said, here are the top 10 games of the weekend for American fans.

There is no doubt about this one, Christian Pulisic has Old Trafford as his stage for his potential Chelsea debut. It doesn’t get any bigger than that as both clubs have huge footprints in the United States.

Pulisic, 20, getting the chance to playing in such a high-profile season opener gives him the opportunity to start his Chelsea tenure off well. There is a lot of pressure on him to perform after a transfer north of $70 million but a big performance on Sunday can help him win the Chelsea faithful over.

Los Angeles FC is by far the best team in MLS at the moment and its owners are doing what they can under the league’s salary limits to bring home both the Supporters Shield and MLS Cup. In this game, LAFC will be heavily favored over the New York Red Bulls.

On Wednesday, Bob Bradley’s team added Brian Rodriguez from Penerol and it might be on the verge of adding Ecuadorian fullback Diego Palacios. To go along with Carlos Vela and Diego Rossi, LAFC look unstoppable right now.

The Red Bulls have been playing mixed soccer in recent weeks and have found ways to get results without playing their best. Last week was a step in the right direction as its defensive line kept a shutout in a 2-0 win over Toronto at home. The Red Bulls can only go as far as its talented backline allows and for stretches it hasn’t lived up to expectations. Keeping LAFC in check is going to take a lot from the team’s defense which includes U.S. international Aaron Long – who did not move during the current window despite interest from abroad.

Timothy Weah had a very encouraging preseason for Lille after joining the club on a transfer from Paris St. Germain (where he also spent time last season on loan with Celtic). Now also coming off the heels of the U-20 World Cup, Weah will be looking to establish himself with Ligue 1’s runner up and Champions League-bound Lille.

This is one of the boldest moves for an American during the offseason because it is also an attainable one where he can contribute on a regular basis. Whether or not Weah starts, he should play regularly and have a fair chance to impress.

This game will feature two teams that are very hard to read. Both teams have struggled at times and are different from years past. A

Atlanta is coming off a great performance last weekend in a convincing 3-0 win over the LA Galaxy and the club also advanced to the final of the USOC after defeating Orlando City 2-0 on the road. But despite it all, the relationship between the players and manager Frank de Boer does not seem to be cozy and it was less than two weeks ago at the All-Star game where players were publicly critical of the team’s direction under the Dutch manager.

New York City FC might end up winning the Eastern Conference if in continues to get points at the rate it has. But the team needed a rally to get past Houston at home on Thursday and was easily defeated on the road last weekend by Real Salt Lake. The fun item about New York City is that the team has become more successful as the older stars like David Villa, Andrea Pirlo, and Frank Lampard departed. The younger approach has been more successful. The problem remains its stadium situation forces it to place games at an even more condensed rate toward the end of the season and that is taxing on its depth.

Last weekend in the Championship opener, American left back was one of Wigan Athletic’s best players in a 3-2 win over Cardiff City. The U.S. and U-23 international was very effective getting into the attack and controlling his side of the field.

On Saturday Robinson and Wigan will look for their sixth point of the Championship season when they visit Preston North End – which lost its opener last weekend to Millwall.

For Sargent it is all about confidence at the start of the season and a nice cup game, even over a bad opponent, will help heading into the Bundesliga opener next weekend against Fortuna Dusseldorf.

DC United is coming off a brutal 5-1 loss to Philadelphia last weekend at home. Then midweek, Wayne Rooney announced he was returning to England next year to be a player-coach for Derby County.

It has been a whirlwind for DC United but the team is still very much in the playoff picture and it will be a test to see how it responds.

On the other hand, the LA Galaxy has been dismal ever since Zlatan’s now-famous hattrick. Since the Swede’s final goal, the Galaxy have been outscored 8-0. The most recent loss was 3-0 defeat away at Atlanta where the team was outclassed. But just like DC United, they’re in the playoff picture. The Galaxy are also boosted by the high profile signing of Cristian Pavon from Boca Juniors so it will be interesting to see how well Zlatan and Pavon work together – or not.

Hobro IF is a team that narrowly avoided relegation last but is looking to climb back towards midtable this season. A significant piece of the club’s core is now American as Emmanuel Sabbi and Christian Cappis are both starters. Sabbi has had a tremendous run of games dating back towards the end of last season and still remains a potential option for a sale. The young Cappis has been solid on both sides of the ball.

Last weekend, Yosef Sameuel, 22, made his club debut for Hobro coming off the bench and during the past week, the club signed teenage American forward Don Deedson Louicius. Through four games, Hobro has a respectable six points.

But Hobro will have a chance to make a statement on Sunday when it hosts one of the country’s biggest clubs in Brondby.

FC Dallas is one of the most interesting stories in MLS this season. While so many teams are trying to find ways around the salary restrictions, Dallas is trying to win with a core of young, local players that came up from their own academy and now feature for U.S. youth national teams. But the team hasn’t been able to consistently get results. Right now it holds onto seventh place and the last playoff spot but Portland is just two points behind and has played two fewer games.

So how will Paxton Pomykal, Jesus Ferreira, Brandon Servania, Reggie Cannon, and the rest perform down the stretch?

In their way on Saturday is the red-hot Minnesota United which has five wins and two draws in its last seven MLS games. Midweek it advanced to the final of the US Open Cup with a 2-1 win over Portland. American forward, and U-23 eligible, Mason Toye has been red hot recently and the club currently sits in second place.

Minnesota United is pushing way up the top of the table while the young Dallas is trying to hang on. Between both teams, you will get a good look at the core of the U.S. U-23 Olympic qualifying team.

Philadelphia Union is in first place in the Eastern Conference but had been struggling with inconsistent play. Last weekend, however, Jim Curtin’s team turned in its best performance of the season with a 5-1 win over DC United on the road. This will be important to continue that momentum and prove that the win over United was not a fluke. From an American perspective, it will be important to see if the team’s young core including Brendan Aaronson and Austin Trusty can get back into the starting lineup after missing last weekend’s blowout win.

Houston Dynamo had been making a playoff push but lost its third consecutive game midweek in a late-game collapse against New York City.