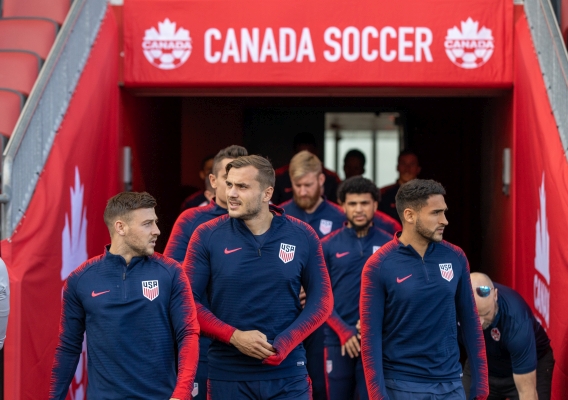 Canada has had its eyes on this game for months and it will be up to the U.S. team to respond to an opponent looking to make a statement playing at home. ASN's Brian Sciaretta looks at what to watch for from the U.S. team.
BY Brian Sciaretta Posted
October 15, 2019
9:00 AM
THE UNITED STATES national team will take on Canada north of the border in Toronto on Tuesday it what will be yet another test for the team under head coach Gregg Berhalter. While not a historical rival, this game has all the makings of a budding new rivalry that will test the U.S. team.

When American Soccer entered into its modern era in the 1990’s, Mexico was the measuring stick for the U.S. team. The rivalry emerged because the U.S. had frequent games against a geographic rival who had success on the international level. Wins against Mexico were viewed as a sign of progress.

The Canadian rivalry has a similar feel but only with reversed roles. Canada has a promising young generation of mostly attacking players in Alphonso Davies, Cyle Larin, Jonathan David, Mark Anthony Kaye. The team is looking for results against geographic rival as a sign of progress. A win over the U.S. team would serve as a statement. While the U.S. team has struggled in recent years, it still has far more success than Canada.

The Nation’s League is a new tournament that lacks prestige but does offer better competition than the now eliminated pre-Hexagonal rounds of World Cup qualifying. For some countries like Canada, the Nation’s League serves the same purpose because a win over the U.S. team could help it increase its FIFA World Ranking as a way to qualify for the Hexagonal.

For the U.S. team, this game is excellent preparation for World Cup qualifying. Canada is heavily motivated and will play with a chip on its shoulder. It will also be playing at home in front of supporters who are also passionately pulling for its team to emerge into a regional contender. It is the kind of environment that friendlies simply cannot replicate.

Heading into this game, we know Zack Steffen will start in goal for the U.S team and we know Brenden Aaronson will not play. There is also the question over how well Josh Sargent’s ankle has healed since his injury last week. The rest of the choices in the starting lineup will be revealing where the team stands at this particular moment.

Here are a few thoughts heading into the game

The first 20 minutes will be key

When any team has a chip on its shoulder and is heavily motivated to pull off an upset, the opening minutes are critical. Canada is likely going to try to take advantage of a wave of energy early in the game. An early goal could put the United States in deep trouble.

But if the United States can avoid mistakes in the first 20 minutes and absorb whatever Canada throws at them, there is a chance the Canadians could become frustrated and end up making mistakes.


Michael Bradley will likely get the start in the No. 6 position and that is going to be very challenging. Playing in a comfortable and familiar stadium in Toronto will help but what he does defensively will be critical for the U.S. team’s chances at winning.

Of course, the central defenders, likely Matt Miazga and Aaron Long, will have their hands full with Davies and David, but a solid performance from Bradely defensively will be a huge asset.

Offensively, Bradley will be responsible for getting the ball into dangerous positions for the likes of Weston McKennie, Christian Pulisic, Jordan Morris, or Paul Arriola.

The No. 6 role will likely be covered by Tyler Adams in the future. But the U.S. team needs to be deep at every position. Age is catching up with Michael Bradley but can he have value on a U.S. team that is getting younger? This game against Canada is where he has a big opportunity to answer some questions heading into World Cup qualifying.

Can Morris continue his momentum?


Jordan Morris has been very strong over the last two months for both club and country. In the September window, he was one of only a few American players that had decent performances (drawing a penalty vs. Mexico, scoring vs. Uruguay, setting up a golden opportunity for Tyler Boyd against Uruguay). For Seattle, he has been an important part of the team’s success where it finished in second place in the Western Conference.

Morris deserves this opportunity to start against Canada and be an important part of the team’s attack. Lately he’s been shown to be valuable down the wing getting behind opponent’s backlines. Canada’s impressive younger generation is mostly in attacking positions. Can the U.S. team take advantage of a vulnerable backline? Morris’ speed and the ability to set up people in the box could be key.


Christian Pulisic is still the best American player in the game right now. Playing time with Chelsea has been pretty rocky – although a nice assist before the break might start an upward trend.

If the U.S. wants to start an upward, Pulisic will need to be a difference maker and score goals in big games – sometimes putting the team on his back.

Berhalter also has options of starting him either on the wing or as one of the two dual No. 10 players. A lot of where he is used will reflect on how comfortable Berhalter is with other players on the roster and where he sees a need for Pulisic.

A strong outing for Pulisic against Canada will be a nice step forward for the player and the team which needs him to be at his best in big games.