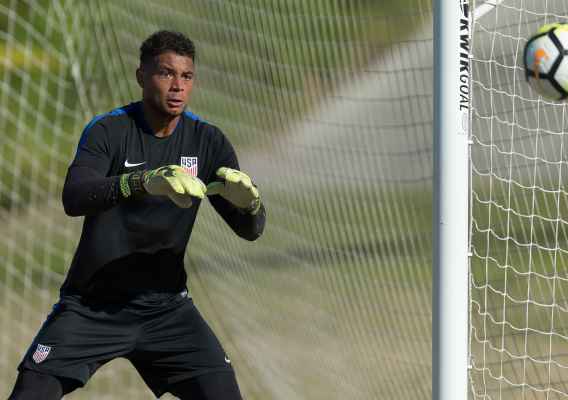 The upcoming friendlies in May and June will be a big test for a young American team looking to build towards the future. What will that roster looks like? ASN's Brian Sciaretta takes a guess.
BY Brian Sciaretta Posted
April 18, 2018
6:00 PM
THE UPCOMING SET OF friendlies for the United States national team against Bolivia, France, and Ireland are likely going to be a bitter pill for fans of the squad. With no World Cup, the roster will showcase players that the coaching staff believes has a future with the team.

Since the team’s failure to qualify in October, Dave Sarachan has stepped in on an interim basis for three friendlies. With the exception of the lackluster 0-0 draw against Bosnia and Herzegovina in January, the team has looked pretty good with a 1-1 draw against Portugal and a 1-0 win over Paraguay. Certainly there is a long ways to go with this young team, but some players have shown promise.

After the Bolivia friendly in Pennsylvania, the road games against Ireland and France should be an enormous test. France, in particular, will head to Russia with a very real chance of winning the tournament.

Expect Sarachan to call many of his top young players to put the team’s best foot forward. The World Cup without the U.S. team will be tough on fans but the best thing possible is for the team to play well in these games and give reason for optimism in the next cycle.

In the friendly against Paraguay, Sarachan called in 23 players. With three games taking place here, it is reasonable to expect more players. With that in mind, here is a projected roster of 25.

The skinny: Steffen, Hamid, and Bono seem like a good trio of young keepers to start a cycle. Sure, Bono had a tough goal in the Champions League final this week but that is what happens with young keepers. That shouldn’t negate his past year. Steffen seems like the logical number one at this point. Hamid is solid but he needs to play more in Denmark.

The skinny: Central defense is in pretty good hands right now. Miazga, Brooks, and Carter-Vickers are automatic call-ups right now. Palmer-Brown is still a top talent even if he doesn’t have an ideal number of minutes under his belt. It’s been a lost season for Brooks due to injuries. It would be understandable for everyone if he sat these games out. If that is the case, Red Bulls central defender Tim Parker has made a great case to be next in line.

The backup to right back behind Yedlin is very tough to predict right now. Timothy Chandler should be that guy on paper but getting that translated to the national team has been tough. Is that best left for the next coach to decide or should Sarachan test him in these games? Other options aren’t great. Shaq Moore is back to not playing again for Levante and Eric Lichaj isn’t playing either for Nottingham Forest.

Left back is always a mystery for the national team. Jorge Villafana played well against Paraguay last month. Did Antonee Robinson did not play in that game but did he do enough in camp to merit another call-up? If not, Greg Garza could be in line after a solid start to the season with Atlanta.

The skinny: There is a lot known right now in the midfield. Pulisic, McKennie, Adams, and Saief are locks if healthy. Delgado has had a great 2018 so far and made a strong USMNT debut so he should be in. Trapp also played well against Paraguay so it is hard to see him not being involved. Nagbe wasn’t great against Paraguay but he seems more likely to be on this roster.

Kelyn Rowe, currently out with a minor injury, provides cover and depth both centrally, as a backup No. 10, or out wide. Similarly, Sebastian Lletget is a player Sarachan is familiar, and with the LA Galaxy midfielder now healthy it seems like he could be back as well.

There are wild cards. Paul Arriola was left off the last friendly and is one of the few natural wingers playing at the moment (considering Pulisic as a No. 10 for the U.S. team). Kellyn Acosta might also be returning from his hernia surgery soon in the coming weeks and he will most likely be part of the team’s future.

Lynden Gooch is finally playing for a soon-to-be relegated Sunderland team. If he plays well down the stretch, it is possible to see him involved as Sarachan did call him up against Portugal. Finally, another wild card is Keaton Parks if he can play a few more times in the coming weeks for Benfica.

The skinny: The forward position is very shallow at the moment. Bobby Wood is probably in the mix although he’s had a very rough season. Aron Johannsson, likewise, was set to be called up last month but was injured. Tim Weah, Andrija Novakovich, and Rubio Rubin have all continued to progress at their clubs after playing against Paraguay.

Sarachan does have other options. Is Josh Sargent ready? Or should he get ready for a critical preseason with Werder Bremen? Dom Dwyer is scoring for Orlando. Jozy Altidore is doing well but Sarachan said 2018 is for newer players. Julian Green has been playing for Greuther Furth but has not been finding the net. A few goals over the next month could raise his stock.