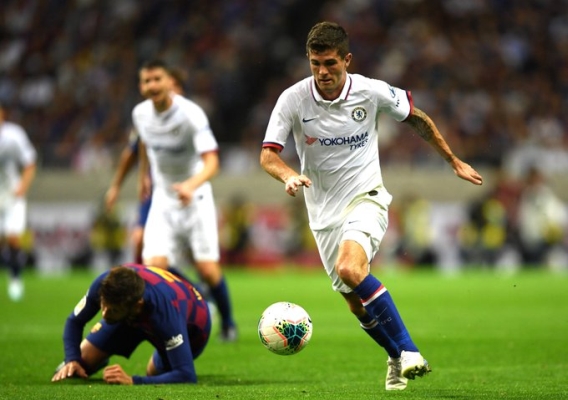 Potential moves for Long, Arriola, EPB while preseason heats up

With the European preseason in full swing and the transfer window open in Europe, there is a lot of news flying and it is tough to put into perspective. But ASN's Brian Sciaretta is your guide for the lastest wave of news.
BY Brian Sciaretta Posted
July 22, 2019
12:00 PM
IN EUROPE, both the preseason and the transfer window continue to offer clues as to what the upcoming season will be like for Americans abroad.

As part of its biweekly features, here is the latest news on the hot stove and preseasons.


Yesterday, reports out of England indicated that Matt Miazga, 24, was going to return to Reading FC for another loan from Chelsea FC. This time it would be for a season.

ASN can confirm that the deal is nearing completion and heading in this direction. It is a good deal for all parties as Reading view the New Jersey native as a starter. When Miazga arrived in January, Reading was in a relegation fight but the club’s fortunes improved when Miazga arrived in the backline.

This is a great piece of the puzzle for Reading which is aiming for a significant improvement from recent seasons – and one that can push into midtable and perhaps a spot in the playoffs. Reading will hold an option to buy Miazga should the club earn promotion.

For Miazga, this is the option that will yield the most minutes. The Championship has a 46 game regular season schedule – on top of two domestic cups. If Miazga is healthy, he should play well over 3000 minutes. That will only increase his value for the following summer.

Aside from a shaky half-season at Nantes in France, Miazga has had a very nice career that has shown an upward trajectory and one where he has helped his clubs achieve big objectives (Supporters Shield for New York, Dutch Cup and Europa playoff qualification at Vitesse, and survival at Reading). Another positive season will put distance between him and Nantes.


Paul Arriola, 24, has been a regular with the national team under Gregg Berhalter and has been having a nice season with DC United – where he has shown an improved final ball. He is an easy player to like with his hustle and defense which are evident even when he’s having an off-game.

Yesterday, we learned there is interest from Europe and Mexico for Arriola and while that is overly broad and does not mention the likelihood of any offers, ASN can report the interest from Mexico is more substantial at this point. Arriola spent his first few professional seasons at Club Tijuana and a move back to Mexico would likely have to be for one of the bigger teams.


Where will Erik Palmer-Brown end up? It’s a good question. He spent last season on loan from Manchester City at NAC Breda. While Palmer-Brown played well the second half of the season, NAC was relegated out of the Eredivisie.

Palmer-Brown will head out on loan again, but he’s had various interesting ranging from the 2.Bundesliga to Belgium. Last week, however, Palmer-Brown was spotted at the training grounds of Austria Vienna in the Austrian Bundesliga. That is a club that will play in the qualifying rounds of the Europa League.

That deal hasn’t been finalized but Palmer-Brown needs to play somewhere – anywhere – where he can get a 2500 minute season.


Former U.S. international turned broadcaster Brian Dunseth has been on top of this story and now reports that West Ham are the team making a bid Red Bull and U.S. national team central defender Aaron Long and that the latest bit was $3 million.

There is nothing to report on this and it is easy to see why a $3 million offer won’t get the job done because selling Long right now (while also not getting a loan back through the end of the season) would essentially end any chance for the Red Bulls to compete in the playoffs.

But one thing to follow is whether the Red Bulls become linked to acquiring another central defender or whether the door becomes open for a loan-back.

This deal might get done, but there are still a lot of moving parts – a bigger fee, a loan-back, or a replacement defender for the Red Bulls.


Besides those mentioned, there are a few other American players potentially on the transfer list to watch in the weeks ahead.

From those already based abroad, I am keeping an eye on Cameron Carter-Vickers and Emmanuel Sabbi seem most likely to make a move over the next couple of weeks.

Among those based domestically, Paxton Pomykal and Reggie Cannon could potentially be on the end of offers although the most likely scenario has them with Dallas through the end of the season.


Johannsson returns to the field


On Thursday, former U.S. national team forward Aron Johannsson played the final 17 minutes for Hammarby in a 5-2 win over Elsborg to remain in sixth place in the Swedish top flight, the Allsvenskan.

According to all reports, Johannsson played well considering he has missed so much time over the past four seasons. He was not a factor in any goal as all were scored before he entered into the game. He still has a long way to go to get back to being an impact player but at least his journey has begun.


Recent U.S. U-20 World Cup fullback Sergino Dest continues to start for Ajax in the preseason at left back, as opposed to his natural right back.

So far he has been performing well and on Tuesday he picked up a nice assist in a 2-1 loss to Panathinaikos. On the play he tracked down a fullback, stripped him of the ball, and fed the assist.

Right now, Dest is looking at likely earning minutes for Ajax at the start of the season. The competition at right back for Ajax is very deep but left back is manageable with Nicolás Tagliafico still on break after playing for Argentina in the Copa America. When Tagliafico returns, it will get a lot harder.

But Dest’s versatility is key and Ajax’s congested schedule with the Champions League, Dutch Cup, and the Eredivisie should open doors at least at the start of the season. Then it will be up to Dest to prove he is ready for more opportunities.


Christian Pulisic’s time at Chelsea is underway in the preseason. He’s now played his first games: 25 minutes in a 1-0 loss to Kawasaki Frontale and 58 minutes in a 2-1 win over Barcelona – today.

So far he’s been rusty, as has most of the team, but has also shown some of his high-level of skill. It’s still far too early to make any judgements about Pulisic’s status heading into his first Premier League season. Of course, it is going to be a massive challenge for him but he’ll get his chances. For now it’s about adjustment.

Cappis is one to watch


In the Danish Superliga over the weekend, Christian Cappis came off the bench and had a tremendous equalizing assist deep into stoppage time for Hobro in a 1-1 draw for Esbjerg.


A last minute assist from Christian Cappis (19) salvages a draw for Hobro on the road against Esbjerg. A hopeful ball over the top from his own half, but sometimes going direct has it’s benefits! ???????? pic.twitter.com/CSkxsVRjLC

At 19, Cappis could be someone who sees more and more playing time as the season progresses. Dating back to his youth days, he’s always had the talent. Now he needs playing time to improve and he took advantage of a key opportunity despite only having a few minutes. It would be justified to see him get more playing time in the weeks ahead.


Tyler Boyd, 24, recently made the switch to play for the United States and he was on the recent Gold Cup team. Now on the heels of a move to Besiktas, Boyd has started off well. In his first preseason friendly, a 7-1 win over Kocaelispor, Boyd was involved in three goals from the right wing position.


In a preseason friendly today, #USMNT winger Tyler Boyd played the 2nd half for Besiktas and was involved in 3 goals in a 7-1 win over Kocaelispor. Here are those goals pic.twitter.com/es7Z2hHbUS