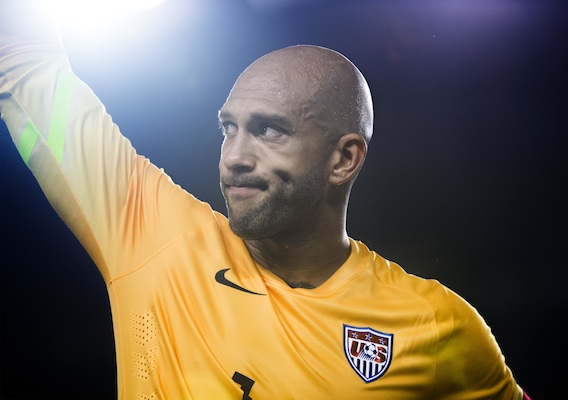 Post-Match Insights on the Yanks' Loss to Costa Rica

Jurgen Klinsmann and the U.S. men's national team have endured a brutal run of form, and everybody knows it. Here, Brian Sciaretta shares quotes and thoughts on where the team goes from here.
BY Brian Sciaretta Posted
October 14, 2015
2:00 PM

The team appears to be regressing—even within CONCACAF. In fact, it has now lost four games in a row at home to CONCACAF sides: Jamaica, Panama, Mexico, and Costa Rica. In those games, the U.S. has been outshot 68 to 47, with a shot disparity of 58 to 26 in the most recent three contests.

Failing to play proactive attacking soccer against elite teams is one thing. Failing to do it against teams it must get by to qualify for the 2018 World Cup in Russia is another.

Here are my observations from Tuesday's match.

Fatigue is no excuse

Everyone knew that Costa Rica would be a tough turnaround, coming as it did just three nights after an emotional CONCACAF Cup loss against Mexico. That game, of course, went 120 minutes on a hot night some 2,500 miles away, leaving little time to prepare for the follow-up.

That being said, plenty of players featured against Costa Rica who either did not play against Mexico (Brek Shea, Danny Williams, Tim Howard, Mix Diskerud, Tim Ream, Michael Orozco, Lee Nguyen, Ventura Alvarado, and Jonathan Spector) or played very little (DeAndre Yedlin, Bobby Wood, and Brad Evans). Only Geoff Cameron, Gyasi Zardes, Jermaine Jones, and Jozy Altidore were significant holdovers, and only Zardes played past the half on Tuesday.

“Obviously you saw this Saturday night's clash with Mexico was still kind of heavy in the air,” Jurgen Klinsmann said in his post-match press conference. “Our heads were full.”

In other words, physical fatigue was not the real issue. Still, this game presented a golden opportunity for players to step up, make a name for themselves, and perhaps get themselves into the picture moving forward.

Now there is no momentum heading into World Cup qualifying, and there is no one making a particular case to be the solution to that problem, either.

“You could see it through the game that we were not able to create enough chances to be a real threat for Costa Rica,” Klinsmann said. “I tried to give everybody minutes to make a real statement ahead of World Cup qualifying but overall, you have to go through that.

“It's part of life. It's part of your job. There are not only sunshine days. Now it’s raining a little bit.”

Klinsmann addressed the media after the match and acknowledged the obvious: The situation surrounding the team was not good.

"When other people speculate about your role or your job, that's fine. That's all right. At the end of the day I am here to serve the U.S. Soccer community to the best of my abilities and give everything I have.”

One point the coach and technical director made clear, however, is that he was not about to walk away from his responsibilities.

“This is part of life,” he said. “It's definitely not part of my character to give up.

“It drives you even more. … I understand people are a little bit critical because of the disappointment at the Gold Cup and on Saturday. I respect that. But at the same time, with everything that does not go my way, I get hungrier.”

The need to get younger

So where does the team go from here? The coach re-emphasized the need to get younger, but as for which players outside the current fold might be part of that youth movement, no one knows quite yet. The U-23 team has had mixed results itself, and doesn’t really have players excelling at their clubs in positions the senior team truly needs.

All this, then, points to a crucial January camp. On Monday, Klinsmann said that while he was willing under certain circumstances to introduce young players into the team in World Cup qualifying, the priority is to get the job done.

Next summer, if all continues as planned, the United States will host the Copa America Centenario, marking the highest-profile tournament in the country since 1994. The U.S. will have to put its best foot forward in that tournament, likely ruling out the infusion of too much fresh blood.

As a result, this upcoming January camp is looking like it could be the most important one in a long time. From the last January camp, only Gyasi Zardes emerged to play a meaningful role on the team in 2015. Klinsmann will have to unearth far more players three months from now.

Fabian Johnson is easily one of the most talented players in the United States pool and is the only one playing on a Champions League team—Borussia Monchengladbach. Moving forward, it is unclear if or when he will rejoin the U.S. setup.

On Monday, Klinsmann made the stunning announcement that he sent Johnson home after having a “very severe word” with him. According to the coach, Johnson asked out of the game against Mexico in the 111th minute but “was not injured.”

So who was right? Klinsmann was frank on Wednesday.

“I understand the club,” he said bluntly. “If you want to test it out, then see if he's playing on the weekend.”

No clear No. 1 keeper

On Tuesday Tim Howard made his first appearance for the national team since the 2014 World Cup, in which he earned international accolades for his performance. He then took a break from U.S. play, leaving Brad Guzan as the first-choice backstop. Since returning, Howard has played behind Guzan for the past two camps.

Now that Howard is back on the field, though, Klinsmann was non-committal when asked whether Guzan was still the team’s go-to goalie.

“We have two outstanding, international-caliber goalkeepers, and we need both of them on board,” he said. “Going forward they will probably rotate.”

Poor Form Ahead of Qualifying

As the Americans limp into World Cup qualifying, they can at least take solace that their first two opponents—St. Vincent & the Grenadines and Trinidad & Tobago—are hardly world-beaters.

But it's worth remembering that the Yanks struggled on the road against Antigua & Barbuda three years ago, so the November 17 match against T&T is no sure thing. In fact, the U.S. needed a result against Guatemala on its final day of the qualifying round just to reach the Hex.

Will Klinsmann be able to turn things around before the U.S. digs itself into a hole? It remains to be seen.