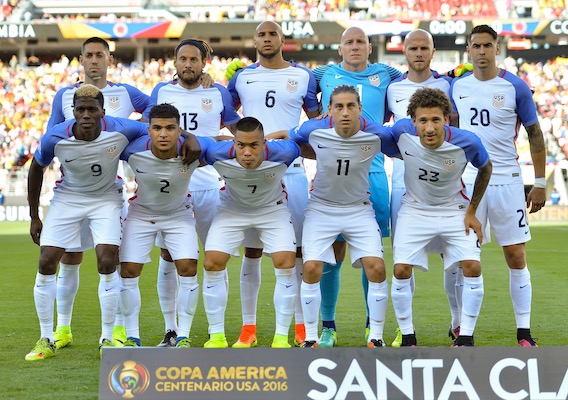 Did the U.S. give the No. 3-ranked team in the world everything it could handle? Or did Colombia play the Americans like a fiddle? Here is Brian Sciaretta's take, as viewed through player performances.
BY Brian Sciaretta Posted
June 04, 2016
1:55 AM

THE UNITED STATES men's national team opened its Copa America Centenario campaign in poor fashion with a lackluster and uninspired 2-0 loss to Colombia. Few players should feel satisfied with their performance and unless there is a major improvement in its performance, it will be a quick tournament for the Americans.

Here's my take on the individual performances.

Brad Guzan: The Aston Villa keeper did not have much of a chance on either of the two goals. His distribution was mixed but he made a few nice saves along the way. Rating: 5.5

DeAndre Yedlin: Earning the start at right back in a major tournament, Yedlin struggled against Colombia. Only rarely did he get forward effectively and he was correctly whistled for a handball in the box, conceding a penalty and ultimately a back-breaking goal. Rating: 4

Geoff Cameron: The Stoke City defender had an awful moment when he lost Cristian Zapata on a set piece in the 8th minute on the opening goal. The unfortunate reality is that Cameron had a decent game otherwise but in this game, against a strong Colombian team, he needed to be close to perfect. Rating: 5

John Brooks: The Hertha Berlin defender was perhaps the best player on the field for the U.S. He misfired on a few passes but his defense was strong. Rating: 6

Fabian Johnson: It was a pretty good outing for Johnson who defended well at the left back position and made some dangerous runs into the final third. On the flip side, his final ball was often lacking and he didn’t combine well with teammates. Rating: 5.5

Alejandro Bedoya: In a rough game for the U.S. team, Bedoya worked extremely hard. His work rate was impressive and he tracked back to play aggressive defense. Like every other U.S. player, he didn’t make a difference in the final third. Rating: 5.5

Michael Bradley: It was a subpar game from the captain whose passing was off and he was a key reason why the midfield was flat. He lost the ball that led to Colombia’s counterattack and penalty. His chemistry with Jermaine Jones was nonexistent. Rating: 4

Jermaine Jones: Like Bradley, it was a game to forget from Jones who was visibly angry when removed from the game in the 66th minute. Jones tried to move into the attack but looked lost. He did little to help in possession and didn’t bring the edge defensively. Rating: 4

Bobby Wood: Whenever the U.S. moved into the final third, Wood looked unsure of what to do or how to combine with his teammates from the wing position. Rating: 4.5

Clint Dempsey: The 4-3-3 is not ideal for Dempsey and he was not consistently dangerous. He did manage, however, to play with passion and have the two best chances in the game forcing a goal line clearance in the 60th minute off a corner and forcing a great save off a terrific free kick in the 64th minute. Rating: 5.5

Gyasi Zardes: The Los Angeles Galaxy attacker was out on the wing and made some nice runs and drew some fouls. While his final ball was missing and his first touch occasionally let him down, he was far from the team’s biggest attacking weakness and played with some heart. Rating: 5

Christian Pulsic: The teenager came into the game in a tough situation. He looked dangerous and involved but the game was lost and there was not much he could do in his 24 minutes. Rating: 6

Darlington Nagbe: The Portland Timbers midfielder was outstanding in recent friendlies but did not earn the start against Colombia. He looked better than Jones but still lost the ball a few times. He took more risks than usual to try to reverse the game but it was a lost cause. Rating: 5.5

Graham Zusi: Came on in the 86th minute but did not play enough to earn a grade. Rating: NR

Jurgen Klinsmann: The cold reality is that the U.S. waslikely to lose against Colombia no matter the coach. But this shouldn't let Klinsmann off the hook as his team looked out of ideas when trying to attack and was dispirited in general. The Bradley-Jones midfield combination reached a low point despite rarely being successful dating back to before his tenure. Zardes, Wood, and Dempsey did not look to be in good position to be at their best. Does he see the need to make significant changes ahead of Tuesday? His debatable (to be generous) statements that the game was equal, aside from a few moments, suggests that he does not. Rating: 4

These are Brian's ratings—now share yours. It's easy with ASN's Player Ratings tool.